If you go to your city, county, school board or state official website you will see words like “sustainable development” and “smart growth”. The Florida Department of Environmental Protection (FDEP) uses these words on its website. The FDEP website states, “The goal of the Sustainable Initiatives programs is to promote sustainability in Florida businesses, schools and homes. Sustainability is meeting the needs of the present population without compromising the ability of future populations to meet its needs.”

Another example is the University of Florida sustainability website. The about page reads, “Simply defined, sustainability is meeting contemporary needs without compromising the ability of future generations to satisfy their needs. More comprehensively, it means looking at the issues and problems facing our world with a new perspective – one that focuses on three interdependent areas of concern: ecological preservation, economic viability, and social justice.” Note the words “social justice”.

Florida even has a Sustainability Institute, whose mission is to address, “Direct threats, such as sea level rise and extreme weather events, and indirect risks linked to our region’s status as a global destination and trade center, place Florida on the front lines of the fight against global warming. ”

So why are Democrats, especially progressive ones from California, against sustainable development and smart growth? Answer: It is all about taking away property rights.

The leader of these progressive Democrats is Rosa Koire, ASA, who is a forensic commercial real estate appraiser specializing in eminent domain valuation.  Her twenty-eight year career as an expert witness on land use has culminated in exposing the impacts of Sustainable Development on private property rights and individual liberty.

Koire became involved in 2005 when she was elected to a citizens’ oversight committee in Santa Rosa, Northern California, to review a proposed 1,300 acre redevelopment project in which 10,000 people live and work. Her research into the documents justifying the plans led her, with her partner Kay Tokerud, to challenge the fraudulent basis for the huge Gateways Redevelopment Project. The City, in an attempt to block Koire from exposing the project, removed the neighborhood in which Koire and Tokerud’s properties were located from the redevelopment area.

Koire and Tokerud fought on, however, not wanting to abandon the thousands of business and property owners still in the area. They formed a business and property owners association and a non-profit organization (Concerned Citizens of Santa Rosa Against Redevelopment Law Abuse) and were able to raise nearly $500,000 in donations and pro bono legal work to sue the City of Santa Rosa to stop the project. The court case, Tokerud v. City of Santa Rosa, lost in Superior Court but the court ruled that they could continue, and they appealed to the San Francisco First District Court of Appeals where they lost again in 2009. The three years of litigation fighting eminent domain and the redevelopment project succeeded in delaying the project while the economy collapsed–the City has failed to implement its plans, but still has the power of eminent domain over the 1,100 acre area until 2018. 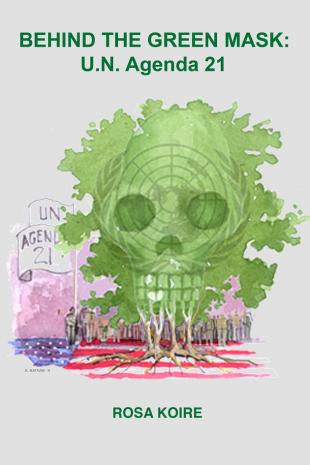 Koire is the author of the book “Behind The Green Mask“. In the book Koire states:

No matter where you live, I’ll bet that there have been hundreds of condos built or planned in the center of your town recently. Over the last ten years there has been a “planning revolution: across the US. It was the implementation of Growing Smart.

Your commercial, industrial and multi-residential land was rezones to “mixed use”. Nearly everything that got approvals for development was designed the same way: ground floor retail with two or three stories of residential above. Mixed use.

Very hard to finance for construction, and very hard to manage since it has to have a high density of people in order to justify the retail. A lot of it empty and most of the ground floor retail is empty too. High Bankruptcy rate. Two areas like this in Jacksonville Florida – off Gate and Southside where Three Forks Restaurant is? And at Town Center mall. [My emphasis]

Florida has been run by Republicans for over a decade. It was during that decade that “sustainable development” became the cause of the party and those elected at every level. All in the name of the taking of property to insure social justice for future generations.

Is this the best solution to the Israel-Palestinian conflict?
Scroll to top