According to Larry Allen, Sarasota County Communication Office, “Sarasota County provided grant funding in the amount of $76,468 to the Arts and Cultural Alliance through the Tourist Development Tax. The Alliance provides funding to the Van Wezel for program series. A  list of prospective show offerings was provided in the grant application process on March, 2012. 50 Shades of Grey was not on the list provided on that date.” [My emphasis]

According to the letter writer, “I didn’t seek out 50 Shades of Grey. It was brought to my attention by a longtime friend who is also a clinical psychologist at a university. She’s a bit older than me. She grew up in the counter culture era and did her fair share of experimentation of all kinds.  So she’s hardly a prude. What she today though is a mother and grandmother. And she’s smart. One of the things that fascinates her is this age of cultural phenomena.  How due to technology things now spread so quickly throughout society and become the next big thing at an increasingly rapid pace. She says sometimes this phenomena is pretty much harmless, and other times it can be very damaging to kids and or adults who begin to emulate something out of a need to belong to the ‘next big thing’.”

According to Mary Bensel, Executive Director of the Van Wezel Performing Arts Hall, 50 Shades is the next big thing.

During a telephone interview Bensel pointed out that the musical is getting rave reviews everywhere it plays. There is a video on the Van Wezel website with patrons (the musical is restricted to those over 18 years old) saying how funny 50 Shades is. But is sexual abuse funny?

Bensel stated she has both read the book 50 Shades of Grey and viewed 50 Shades: The Musical in New York. 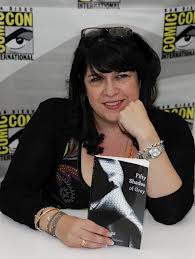 Bensel stated that the Van Wezel paid about $10,000 for the musical and has sold $27,424 in tickets. Sex sells and sexual abuse sells even better?

When asked if anyone from the Van Wezel staff reviewed the lyrics or screen play the answer was “no, that is not our job.” A call was placed to David Freeland, Senior Booking Manager with the Broadway Booking Office, NYC, who is the agent for 50 Shades: The Musical to get a copy of the screen play. Freeland has not return our call as of the publishing of this column.

As the Ulsterman Report letter writer states, “Sexual predators are cons. They almost always have a cover. It’s that cover which allows them access. 50 Shades of Grey is a con. It now has access to millions of readers. It is a story about abuse from beginning to end. And it’s not just the abuse of a man and a woman – it’s the abuse of a man and a girl.”

Bensel’s con is the book and musical are popular, thereby justifying its booking. She also noted that 50 Shades: The Musical and Spank! The Fifty Shades Parody have been booked by other Florida performing arts halls including: The Lakeland Center, Broward Center and Barbara B. Mann Performing Arts Center in Fort Myers, FL.

Senator Marco Rubio has made it his mission to stop human trafficking, including the sex trafficking of children in Florida. Perhaps Senator Rubio should visit the Sarasota City Hall when he comes to Sarasota on March 15th and make the Commissioners understand the problem? Please watch this video interview with Senator Rubio where he states “awareness is critical”:

I would think that these ordinances would prohibit any kind of pornographic performance at the Van Wezel Performing Arts Hall based on this evaluation of 50 Shades of Grey planned to be performed on April 23, 2013.

As a former Director of Florida Family Association for Sarasota/Manatee County, our organization was very much involved with all the Adult Ordinances for the city & County of Sarasota as well as Manatee.

Therefore, I would appreciate knowing what the city of Sarasota plans to do with this performance.

Perhaps the Van Wezel should be issued an Adult Use Permit?