Orlando, FL – Today, parents, Scoutmasters, Eagle Scouts and other Scouting leaders from across the country announced the launch of OnMyHonor.Net, a coalition of concerned Boy Scouts of America (BSA) members who affirm Scouting’s timeless values and will work to keep open homosexuality out of the Boy Scouts. The announcement coincided with the Central Florida Council’s Town Hall Meeting in Orlando, FL which was attended by BSA CEO Wayne Brock and National Commissioner Tico Perez. 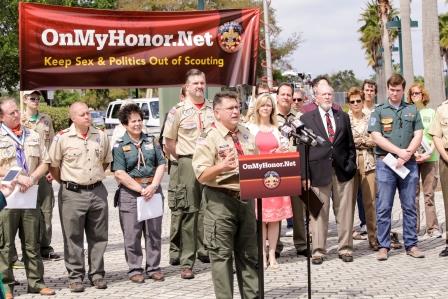 Representatives from thirteen different states including Arizona, Florida, Georgia, Illinois, Maine, Michigan, Mississippi, North Carolina, Pennsylvania, Ohio, Texas, Virginia and Utah attended the launch and gave brief statements of disagreement with a membership policy which would inject sex and politics into the program.

“The Boy Scouts are one of the great jewels of American culture,” said John Stemberger, Eagle Scout and National Spokesperson for OnMyHonor.Net. “We support the current policy of Scouting, which is backed by over 100 years of tradition and allows anyone to participate irrespective of sexual orientation, only disallowing the open and aggressive promotion of homosexuality and political agendas. When it comes to young boys, parents have the final say on the issues of sex and politics.”

Former U.S. Congressman Dick Schulze from Pennsylvania who is a recipient of the rare Distinguished Eagle Scout award was on hand and made the following comment:  “What kind of a message are we sending to our young people if the very leaders who are teaching Boy Scouts to be brave, cannot even find the courage to stand firm and avoid caving to peer pressure from Hollywood and political activists?”

The Boy Scouts of America lawyers are expected to draft a resolution to be released on April 22 to be voted on by the national council on May 22-23 in Grapevine, Texas as to whether or not to allow open homosexuality in the Boy Scout program.  In February 2013, BSA leaders instructed committees to “further engage representatives of Scouting’s membership and listen to their perspectives and concerns.”

The coalition, which gathers parents, Scout Leaders, Major Donors, and Eagle Scouts in all 50 states who are united in their support of the current membership policy, announced plans of its national campaign of rallies, petitions, speaking out at BSA meetings and other activities to influence the resolution committee, the BSA voting delegates and the general public regarding the legal, social, political and financial implications of changing the membership policy.

OnMyHonor.Net is the official coalition of concerned parents, Scout Leaders, Scouting Donors, Eagle Scouts and other members of the BSA who are united in their support of Scouting’s timeless values and in their opposition to open homosexuality in the Boy Scouts. More information at www.OnMyHonor.net.