The ACLU is ingraining itself in the very fabric of everyday life. From topics such as education, abortion, marriage, and even the Super Bowl, the organization is leaving its mark. But some argue that their effort impacting the freedom of religion is the area of greatest concern. In March 2013 alone, a case was brought forth to challenge a portrait of Jesus Christ at a middle school in Ohio, a North Carolina county has been sued over its traditional Christian invocations at meetings, and Mississippi’s pending school prayer law is being threatened. 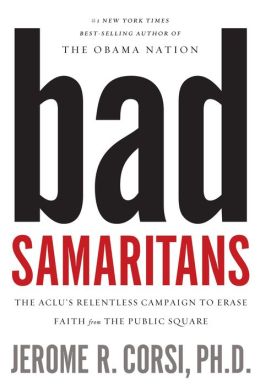 In a new book releasing in April, Bad Samaritans: The ACLU’s Relentless Campaign to Erase Faith from the Public Square (Thomas Nelson, Inc.), New York Times bestselling author Jerome Corsi dares to tackle the issues to enlighten families about things they need to know about the ACLU to protect their rights.

Since the organization was created in 1920, so many constitutional battles have been lost to the ACLU that time has grown short to stop the onslaught. Over its history the ACLU has been the archetypal Bad Samaritan-a stranger to the nation’s religious tradition, whose founders instilled within the organization values designed to erase all vestiges of the nation’s Judeo-Christian roots and replace them with a transplanted godless vision that draws its energy not from Moses or from Jesus Christ, but from Marx and Lenin. Even more insidiously, the ACLU strategy devised by its founders was predicated on a determination to wage its War on God in a stealth fashion in which the ACLU intends to destroy religious freedom by appearing on the scene as a defender of religious freedom.

“For decades, the Bad Samaritan of the ACLU has beaten and robbed the First Amendment’s statement of religious freedom to the point that Judeo-Christian believers have been left lying by the side of the road, as if abandoned to die,” notes Corsi. “Our Founding Fathers aptly reminded us, only a moral people can preserve the liberty required to build a bright future for America in which individual initiative and free enterprise can thrive once again. In a Judeo-Christian nation, Good Samaritans are not only welcome; they are possible. In the world desired by the ACLU, Good Samaritans will not only be rare, they are likely to be persecuted, if not prosecuted.”

Since its founding, the ACLU has set out to pervert the First Amendment, written to preserve religious freedom, into a twisted interpretation where “freedom of religion” is now read to mean “freedom from religion,” a reinterpretation made necessary if the ACLU is to accomplish its long-standing goal of removing God from America’s public square. The founding principles of the ACLU make it apparent that their goal is to wage a War on God and undermine liberties.
Cont.

“The protection and rights of the individual-conceived as an eternal soul given life by a Supreme Being, endowed with unalienable rights, and governed by a code of natural right built into human consciousness by our Creator-are the fundamental construct that drove our Founding Fathers to write the Declaration of Independence, the Constitution, and the Bill of Rights,” says Corsi. “The ACLU understands correctly that attacking God is the only way the American people would ever permit these sacred documents to be so deeply rewritten as to subvert their original meaning. If the American people can be driven from believing in God, the consequence is that our rights are no longer unalienable, but instead our rights, such as they may be, are bestowed by a state that can as easily take away the rights as grant them in the first place.”

“The point of the Bad Samaritans book is that the hour is late, but the battle is not yet lost,” explains Corsi. “It’s not intended as a comprehensive compendium of Supreme Court cases dealing with religion. Instead, I want to unmask the ACLU’s hypocritical fade of defending civil liberties that the organization strives to sell to a secular public unable to appreciate how deeply liberty will be lost if God is abandoned. I will expose the secret history of the ACLU in order to encourage supporters of our faith to enter the war on God’s side. We must win the war against our faith if we are to preserve for future generations the heritage of liberty our Founding Fathers so generously left for us. If the ACLU wins its War on God, our founding documents-including the Declaration of Independence, the Constitution, and the Bill of Rights-will not be worth the parchment on which they were written.”

Told in a straightforward, no-nonsense style, Corsi lays out the history of this struggle, its communist roots, and the court cases that are serving to slowly erode the foundations of our freedom. Today we see the fruits of the ACLU’s master plan-a culture flooded with pornography, placing little worth on the value of a human life, and one in which protection and special treatment seem to exist for everyone except those of a Judeo-Christian background.

Bad Samaritans looks behind the headlines and shows the ACLU’s fingerprints as it works to destroy freedom and enslave our constitutional republic to the demands of a Marxist state. It’s time to fight back.

Jerome Corsi has written and coauthored many books and articles, including the #1 New York Times bestseller, Unfit for Command (Regnery, 2004). Corsi is the founder of the Iran Freedom Walk. He has appeared on Fox News and MSNBC regarding Iran, as well as hundreds of radio interviews.