Gabriel Gomez is the GOP candidate for the US Senate in the June 25 special election to replace John Kerry. In the primary, he was the big favorite of the national GOP establishment. They said Gomez represents the future of the Party. Gomez’s slogan is that he’s going to be “a new kind of Republican.”

No Republican candidate for US Senate has ever (to our knowledge) campaigned for office by having a booth at a Gay Pride festival.

Republican US Senate Candidate Gabriel Gomez (pictured above third from left) stands outside of his booth at the “Gay Pride” Celebration.  Seated at the booth getting his photo taken by woman is Gomez’s 8-year-old son. [MassResistance photo]

This past weekend’s Gay Pride Parade went through downtown Boston and ended at City Hall Plaza, where, as in past years, a huge “Gay Celebration” was held with numerous booths.

Not many politicians of any party buy a booth at this event. But Gabriel Gomez not only had a booth, but he was there to greet people personally. And he brought his eight-year-old son to help run the booth, along with at least one very pro-GLBT campaign worker. 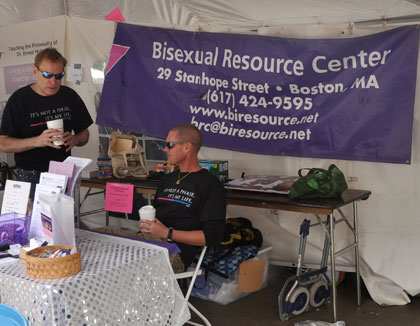 Diversity? No problem. Not too far away was the booth for the Bisexual Resource Center. [Mass-Resistance photo]


Earlier in the week, Gomez released a statement saying that he if elected he intended to be considered “a pain in the butt” to the Republican Party, and that he “will go to work on them” to “support allowing two people to get married, whether they are gay or straight.”

This is not surprising given that Gomez had supported Obama in 2008 and had donated $500 to the Obama campaign, and said he supported Obama’s positions on immigration and gun control. Gomez also gave $1,000 to ultra-liberal U.S. Senate candidate Alan Khazei. (Alan Khazei hired gay activist Kevin Jennings to run his non-profit group.)

On the abortion issue, Gomez claims to be “personally pro-life” but says that Roe v Wade is “settled law” and he would do nothing to take away a woman’s right to an abortion.