A smoking gun has been uncovered in the Pinellas term limits case and the defendant’s’ fingerprints are all over it.

You may recall that Pinellas County Commission and constitutional officer term limits passed with 73 percent of the vote in 1996, but the county refused to insert the amendment into their charter as clearly required by the law due to its alleged constitutional ambiguity.

The county commission and the five constitutional officers sued the voters to get the amendment overturned. The district court denied them, upholding the constitutionality of the term limits.

The constitutional officers continued their suit and requested authorization to add the Pinellas County Commission to the appeal. However, the minutes of the 5/30/00 county commission meeting — uncovered via a FOIA request on behalf of plaintiffs in the ongoing case to force commissioners to comply with the law — clearly show that the Pinellas County Commission chose not to participate. 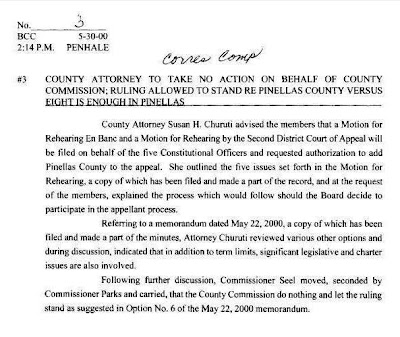 According to the above document, County Attorney Susan H. Churuti advised the commission of their options and the process of becoming appellants. But, the document says, “following discussion, Commissioner [and current defendant Karen] Seel moved, seconded by Commissioner Parks and carried, that the county commission do nothing and let the ruling stand.”

Since then, 10 of the 11 charter counties with county commission term limits are obeying the law. Most of them always did. Only Pinellas — after losing at the district level and then at the Florida Supreme Court — continues to defy the voters and the law.

Philip Blumel is president of U.S. Term Limits, a single-issue advocacy group based in Fairfax, VA, and a certified financial planner working out of downtown West Palm Beach, FL.