The following is courtesy of the Florida Term Limits blog: 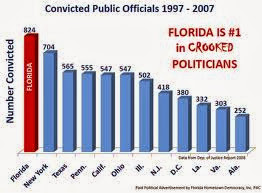 According to a 2012 study, Florida is the most corrupt state in the United States based on the number of state officials convicted on federal public corruption charges.

“Florida faces a corruption crisis that threatens the state’s reputation, its economy and its ability to attract new jobs and capital,” wrote study authors Dan Krassner and Ben Wilcox.

This should come as no surprise to Pinellas County residents, who are governed by four county commissioners in defiance of the county’s voter-approved 8-year term limits law. After the term limits amendment was approved by 73% of voters in 1996, commissioners refused to insert the amendment into the county charter even after it was validated by a district court in 1999 and the state Supreme Court in 2012.

That it was their duty to do so is beyond question. Per charter Article VI Sec. 6-02 (3): “If approved by a majority of those electors voting on the amendment at the general election, the amendment shall become effective on the date specified in the amendment, or, if not so specified, on January 1 of the succeeding year.” While a court has the power to invalidate an amendment, there is no leeway here for commissioners alone to refuse to accept the vote of the people.

After a commissioner-friendly local court refused to grant relief, Pinellas citizens are now appealing to the Second District Court of Appeals to have their votes finally counted. On Sept. 30, appellants H. Patrick Wheeler and Maria Scruggs filed their Initial Brief to the Lakeland court.

The filing is against Susan Latvala, John Morroni, Kenneth Welch and Karen Seel, the four commissioners who cling to their power and paychecks in defiance of law. Among other things, the brief documents their ill-gotten gains, including annual salaries of close to $100,000 when including expenses. It also points out the commissioners are using taxpayer money to invalidate the clearly expressed will of those same taxpayers.