The Advocate is the pioneering “gay” publication (1967) and the undisputed, mainstream expression of “Gay Culture,” the history, beliefs, and aims of this sexually revolutionary movement. What does it mean then, that The Advocate’s boy “mascot” was fêted in Long Road to Freedom The Advocate History of the Gay and Lesbian Movement (1994, p. xix)? 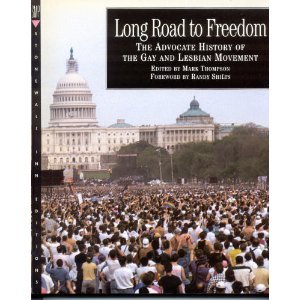 The artist “Toby” drew The Advocate boy-man with a child’s face under macho adult chest, arms, muscled legs, and buttocks. No normal, “straight” American publication has ever postured a boy in this manner. By rotating The Advocate boy’s head 180 degrees the conscious brain can process the lad’s innocent eyes and tender trusting mouth as imagined by “the artist Toby.”

The Library Journal says this book reflects “individuals sharing a common goal.” What “common goal” then, is shared by erotizing a boy as The Advocate’s “unofficial mascot during its early years”?

Concerned about the sexualization of boys, supported by an analysis of The Advocate from 1967 to 1988, Judith A. Reisman, PhD joined with statistician Charles B. Johnson, PhD, to study male In-Search-Of (ISO) advertisements in The Advocate. These ads were compared to similar liberal, upscale male ISOs in The Washingtonian (DC), from 1988 to 1992.

The report is entitled, “Partner Solicitation Characteristics as an Expression of Male Sexual Orientation.”

Since “hate crimes” (or bias motivated crimes), involve targeting someone because of his or her being of a specific group, (religion, sexual orientation, disability, ethnicity, nationality, age, gender, gender identity, or political) a disturbing Advocate finding are data implying a “hate” crime bias against the boy class — trivialized as “playful” recreational sex toys.

For pre-1988 the boy as a recreational sex toy appeared in pictures, film, and general advertisements in almost every issue of The Advocate. January 1988 found 50 such boy adverts and 20 in June 1992. Post 1992 in order to be carried by mainstream newsstands, then school libraries, and bookstores, boy sex ads were wisely jettisoned.

The buttocks-up image of The Advocate mascot was of a piece with other such images of “provocative” boys. In fact, during the 1970’s The Advocate regularly republished a full-page advertisement for a “Penetrable Boy Doll.”

The “Penetrable Boy Doll” was a black silhouette of a nude, white, underage youth, phallically posed. Evidence that the boy sex doll had an eager market is demonstrated by the ad’s repeated appearance in The Advocate. The boy sex doll had to have sold well to appear often in this mainstream, upscale journal.

My apologies for the following direct quotes:

“The Penetrable Boy Doll is available in 3 provocative positions.

Choose the model that will fill your needs…Always up and ready.

Some could reasonably argue, based on the physical and emotional trauma of the lifestyle, and the thousands of dead and dying boys infected by men with AIDS, that sex solicitations for boys are “hate crimes.”