For a larger view click on image. Courtesy of The Peoples Cube.

“I would never treat anyone with disrespect just because they are different from me. We are all created by the Almighty and like Him, I love all of humanity. We would all be better off if we loved God and loved each other.” – Intolerant, bigoted hick, Phil Robertson

With the fires barely extinguished on their Barilla pasta boxes, GLAAD has found a new victim to harass: Phil Robertson of Duck Dynasty.

GLAAD’s beef with Phil is that Phil’s Bible says the gay lifestyle is “sinful.” Phil does not use the New Progressive Bible co-authored by GLAAD and other liberals, but instead chooses to study the outdated traditional Bible.

This is a big deal, because everyone in this country must have a religion that embraces gayness. New, approved Groupthink™ teaches that as long as the parties involved LOVE each other, it doesn’t matter what God says. All religions must comply to receive tax-exempt status (Muslims excluded).

Phil calmly responded, “I didn’t write the Bible. If you have a problem with the Bible, take it up with the Lord.”

GLAAD then filed an Offensive Religion lawsuit against God for the continued H8 and bigotry implied in the word “sin.” They released the following statement:

“We want God to stop smiting us and our lifestyle. We have dealt with the smiting for centuries and we are done – DONE! God’s orders are very discriminatory and do not progress with the changing times. His morals are inflexible and rigid.”

After the Colorado bakers were forced by the courts to make a cake for a gay wedding, GLAAD was hopeful that the courts could also force God to make a new Bible.

GLAAD asked to be compensated with a new kinder, gentler version of the Bible – novelized over centuries by multiple authors – with a 10% tithe going to sex-change charities.

God, a very high-tech deity, responded to GLAAD through email with an updated PDF of a form that used to circulate around the internet. The People’s Cube was able to get a copy of GLAAD’s response through the Freedom of Information Act: 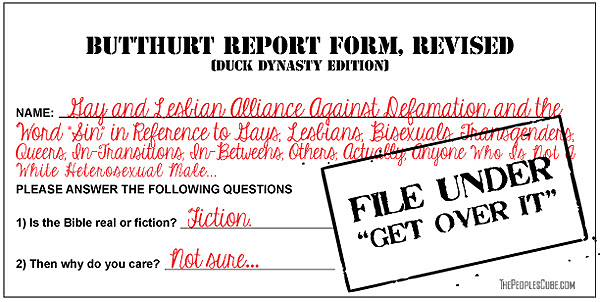 Obviously, God is being non-compliant, which presents a problem. If God does not show up in court, the NSA has been authorized to track down God’s IP address through the PDF upload, and bring him in to answer for the global crime of calling gayness a “sin.”

We expect GLAAD will have their panties in a bunch, no matter what the outcome.

EDITORS NOTE: Further investigation has discovered that the PDF submitted by God contains layers that are not consistent with technology used at the time of the writing of the Bible, as well as the fact that back flaps may be the reason behind GLAAD’s panties-in-a-bunch problem. This column originally appeared on The Peoples Cube.