When a young illustrator from Moscow, Andrei Tarusov, decided to picture how the Winter Olympics might have looked in the old USSR if the erstwhile Soviet government hadn’t been so zealous in suppressing the sexuality of its citizens, he let his imagination run wild.

The result was an off-the-wall calendar that creatively combined Soviet propaganda poster art with vintage American pin-ups: scantily clad retro-babes in classic pin-up poses but with Soviet enthusiastic fire in their eyes, engaging in winter sports with athletic equipment from the 1940s and 1950s. The pictures were accompanied by rhymed slogans, written by the artist’s friend in the traditional propagandistic style with a new, ironic twist.

Tarusov contacted the Olympic Committee hoping it would sponsor his project in promoting the 2014 Winter Olympics in Sochi. Whether the Committee was protecting its reputation or it feared attacks from feminist groups, the answer was definitive “nyet.”

That’s when the artist decided to go solo with “crowdfunding” and posted the calendar, stripped of any official Olympic trademarks, on the Russian version of Kickstarter.com. His goal was to raise 120,000 rubles (USD $3,554) to cover the printing costs, but the result exceeded his expectations: donations from 1,493 people totaled 1,453,900 rubles (USD $43,060). 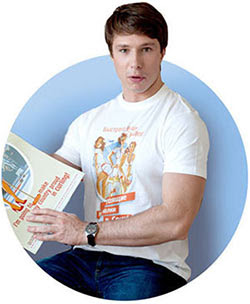 According to Tarusov, his calendar became “super famous in Russia,” resulting in a solid week of TV reporters crowding his apartment. This prompted him to create the English version, too.

The young Russian’s love affair with American pin-ups started long before this recent success. In 2012, he created a humorous Apocalypse Tomorrow Calendar with sexy babes in various stages of getting undressed against the background of alien invasion, global warming, zombies, global cooling, and other similarly improbable scenarios.

Last year he issued The Fridays of the 2013 calendar with imaginary posters of made-up horror movies starring classic Hollywood actresses.

And four years ago we reported on an even more hilarious series of pin-up/agitprop posters, also published as a 2010 calendar by another Russian illustrator, Valeri Barykin.

What compels Russia’s graphic artists to create these phantasmagoric, culture-jamming mash-ups of Soviet visual propaganda and vintage American pin-ups? Imaginative and comedic on its face, this new genre seems to have a deeper cultural motive, being an artistic response to the larger society’s nostalgic longing for America’s 1950s – a mythical golden age which had been denied to the Soviets by their own tyrannical and rigidly ideological government.

Samples of Soviet posters used by Tarusov in his work

The Soviet 1950s started with Stalin’s rule of terror, post-war deprivation, and millions of political prisoners rotting in the gulags. 1953 was marked by a nation-wide anti-Semitic witch hunt as Stalin’s death was blamed on the conspiracy by Jewish doctors. Only in 1958, as Khrushchev denounced Stalin’s tyranny and set a course of reforms, there appeared a timid hope of “socialism with a human face,” but even that lame promise was never fulfilled.

At the same time, a shimmering image of a better life was rising from above the Iron Curtain, like the atmospheric reflection of a distant world across the ocean – a mirage producing displaced and often misshapen images of a happier, sunnier, and sexier lifestyle. Any attempts by the Soviets to recreate that fanciful image in music, fashion, or art were severely persecuted by the authorities.

Four decades later, in the early 1990s, the fall of Communism and the Iron Curtain had left the former Soviets with a legacy of severely distorted history, incomplete culture, and a warped vision of the outside world. The nation’s intellectuals rushed to repair the damage and correct these deficiencies by doing what was then termed “filling in the blank spots.” Historians and journalists researched and published shocking revelations from newly opened archives, authors wrote books on previously forbidden subjects, and musicians played somewhat anachronistic rock and roll of the 50s and 60s to the delight of their multiple fans.

That work is obviously still in progress, as artists continue to fantasize about things that could have happened but didn’t, helping their audiences to re-imagine and relive their past in a happier, sunnier, and sexier alternative reality.

History may not operate in subjunctive mood, but art certainly does. 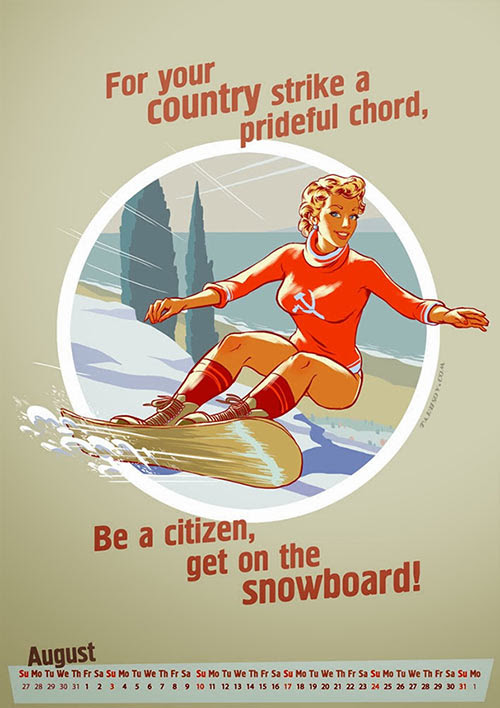 SEE THE REST OF THE CALENDAR HERE,