Vladimir Putin’s recent intervention in Ukraine on the pretext of defending the ethnic Russian population has forced other former Soviet republics to look for ingenious ways to protect their own sovereignty from similar moves.

On Monday, the Parliament of Kazakhstan, with a 25% ethnic Russian population and a 4,660 mile-long border shared with Russia, voted to rename the country ‘New Illinois,’ hoping to attract more American support for their territorial integrity. Kazakhstan’s President, Nursultan Nazarbayev, is expected to sign the emergency bill into law by Wednesday, setting in motion a complex process for the Central Asian nation of almost 18 million people. 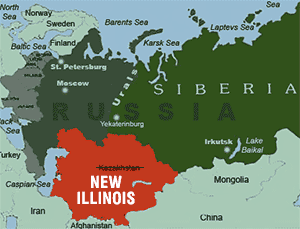 A spokesman for the government in the capital city of Astana said that ‘New Illinois’ was chosen because US President Barack Obama was a state and then US Senator for the state of Illinois, and such a name change was more likely to get his attention and engender a strong enough reaction to the threat of foreign invasion.

“We noticed a hesitancy on the part of President Obama to act when Russia moved on Ukraine,” said Prime Minister Serik Akhmetov. “And we asked ourselves, what if Obama’s reluctance was due to the fact that ‘Ukraine’ sounded too foreign to the president who is almost exclusively interested in American domestic policy? So we thought we might get more interest from him if we had a familiar sounding American name. This was the easiest way.”

Fearing that the name change alone may not be enough, the Kazakh parliament has begun debate on a second bill to rename the Kazakh ethnicity to ‘African Americans,’ within the hope that Americans will be more sympathetic to their plight if they are identified with a more familiar ethnic minority.

“We are confident President Obama will not tolerate the oppression of any African Americans, even those in Central Asia,” said Akhmetov. “And with any luck we may even get some foreign – or in this case, domestic, aid.”

Even though the process of replacing all the country’s signs, currency, postage, and identification cards is likely to be difficult and expensive, other former Soviet republics, which emerged from the collapse of the old Soviet Union in 1991, are considering similar moves. 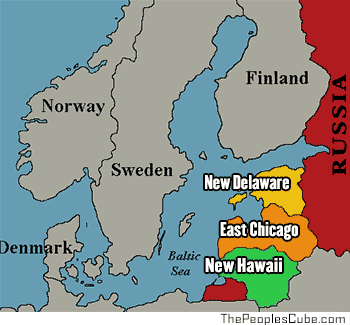 Today, the parliament of Latvia is debating a bill to rename their small Baltic nation of two million inhabitants to ‘East Chicago,’ as concern increases that Russian president Vladimir Putin may invade them to “protect” the half a million ethnic Russians who had settled there in the Soviet era.

Meanwhile, Lithuania has staked out the name ‘New Hawaii’ and Estonia is expected to take the name ‘New Delaware’ after the home state of US Vice President Joe Biden.

The future states of East Chicago, New Hawaii, and New Delaware are also considering changing their ethnic identities to ‘African Americans,’ although some local political leaders have proposed a change to ‘Mexican-Americans,’ which they believe may also help them gain support among moderate Republicans in the US.