Passed House, now in Senate. This must be stopped!
To the rest of the country: This could be coming to you.

The homosexual lobby is now putting a full-court press on the Massachusetts Legislature to pass H3909 which would change the state’s school “anti-bullying” law — to completely silence any negative discussion of those behaviors and threaten schools and administrators that do not comply.

They have made this a top priority. On Feb. 24, it quietly passed the House by a large margin (145-4!). It is now in the Senate Ways and Means Committee, and could go to the full Senate any day.

Part of a larger agenda

For years MassResistance has been exposing how the homosexual movement is using legitimate school bullying concerns across the country to hijack anti-bullying legislation and push laws that force their agenda on children and all school employees. This is just the latest on the homosexual movement’s obsession with the nation’s public schools.

What this bill would do

Their stated goal is to use the anti-bullying laws to “change the overall climate and culture” in the every school in the state by “addressing bigotry and discrimination.” In other words, the goal is not to reduce bullying per se, but topunish opinions by students and staff that are critical of homosexual or transgender behaviors, or of their movement.

(1) It would require the so-called “enumerated categories” of “sexual orientation” and “gender identity” to be written into the current anti-bullying law. This would allow all the sections of the law to focus on those behaviors, rather than just the general population of students.

(2) It would include special yearly diversity training (labeled “professional development”) for all school employees, as well as similar sessions for students, based on the “enumerated categories.” National homosexual groups such as PFLAG have already indicated they are ready to provide this training to schools!

(3) It would require the use of “school climate surveys” in every school. These are invariably created by national homosexual groups and are notoriously unscientific. But by “proving” there is a dangerous climate for “gays” in schools, the activists demand more “gay” programs (and funding) from state lawmakers.

(4) It would impose a very heavy requirement of record-keeping and reporting requirements of every “bullying” incident, real or suspected, for every school. Every school employee would be responsible for reporting this information. Since this is extremely subjective, and there are penalties for not reporting a possible incident, it would easily be used by activists to increase funding for agenda-driven programs.

The requirements of this bill also include any private schools and religious schools that accept “special needs” children through an agreement with the state.

After the House passed H3909 the liberal Boston media generally portrayed it as a positive next step, without exploring what it actually does. But the Boston Heraldeditors actually read the bill and saw how ridiculous it was — even though they had gone along with the original bill. On March 3 they published this surprisingly strong editorial against it.

That editorial attracted this revealing Letter to the Editor, published on March 5, from the homosexual group MassEquality and the Anti-Defamation League (ADL). The ADL has alienated a lot of the Jewish community by their shameful promotion of the homosexual agenda, and worked closely with the homosexual groups pushing the original law.

Note that the last line in the letter summarizes their true goal with this legislation:“The proposed updates will help schools to change the overall climate and culture by addressing bigotry and discrimination” (.e., punishing contrary opinions voiced in schools on homosexuality).

History of the law

In 2005 and 2007 there were several unsuccessful attempts by radical groups to pass politically motivated anti-bullying laws in the Legislature. Each timeMassResistance exposed their agendas and was able to stop the bills in committee.

Then in 2009, the Massachusetts homosexual lobby was determined not to be stopped. They teamed up with several radical state and national homosexual groups (and the ADL) and used the tragic suicides of two students in Massachusetts as the basis to introduce the most radical anti-bullying bill ever attempted.

They employed a massive well-financed, and sophisticated media campaign to arouse the public on this issue and the desperate need for legislation. It was very effective. Over several months they placed barrage of articles and feature stories of bullying incidents in newspapers, radio, TV, and magazines, that often dripped with emotion.

However, MassResistance fought hard to get the truth out. We were a major presence at the bill’s public hearing in November 2009 confronting the waves of activists and “experts” they brought in. And we warned the legislature that the bulk of the bill was taken from the websites of national homosexual advocacy organizations.

After the hearing, MassResistance continued to lead lobbying efforts in the State House. These efforts ultimately helped stop some of the most outrageous aspects of the bill. (In fact, the homosexual lobby acknowledged that they were “advised by key legislative leaders that the time wasn’t quite right” to include “enumerated categories” and other radical features in the law.)

But the climate of hysteria generated by the PR campaign could not be derailed, and in May 2010, after some changes and compromises, the final bill passed unanimously in both houses.

Here is basically what it does. Even though the homosexual lobby didn’t get everything they wanted, the (pro-gay) chairman of the Education Committee still (rightly) called it “the strongest anti-bullying legislation in the country.”

In return for the homosexual lobby’s concessions in the 2010 law, the politicians included a section that created a temporary 7-member “Special Commission on Bullying Prevention” headed by the Attorney General. This committee was to hold meetings across the state and “investigate” to see if any “updates” were needed to the anti-bullying law, and report back to the Legislature by June 30, 2011.

The “special commission” was a sham. Their public meetings were little more than a front to give the homosexual groups a forum to “officially” come up with their desired changes. Nevertheless, MassResistance submitted written testimony at a February, 2011 meeting so that we would be on the record describing whatshould be done.

Gay lobby comes back again for what they really wanted

Within days of the passage of the 2010 law, the homosexual lobby announced that they’d be back again for what they really wanted: enumerated categories and the ability to use the law to directly force their agenda on students and faculty.
At the beginning of the 2011-2012 session they filed a bill with their updates, but MassResistance and others fought hard and it died in committee.

This session, however, they’ve made it a top priority. In January, 2013, they filed bill H454, which later temporarily became H3721, and is now H3909.  They’ve framed this as the “official” recommendation of the Attorney General’s “Special Commission on Bullying Prevention.”

Text of the current anti-bullying law, with the changes that H3909 would make to it.

Full-court press at May 30, 2013 public hearing for new bill

On May 30, 2013, the Joint Education Committee held a public hearing for the new bill. Many of the same radical special interests flooded the hearing as in 2009 to get the original bill passed, with nearly identical emotional horror stories of bullying incidents that were happening to helpless children. 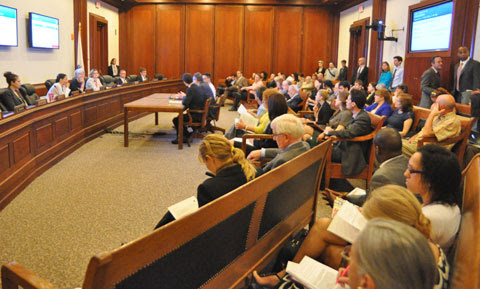 On May 30, 2013 the homosexual lobby filled the hearing room with their supporters and testifiers. MassResistance was there to represent the pro-family position.

It was an eerie feeling. The Massachusetts anti-bully law — “the strongest anti-bullying bill in the country” — had been in effect in every school for over three years. But it was as if it had never been passed at all. The legislators were told over and over again about terrible bullying going on across the state. And the “only” thing that would stop all this would to pass their new bill!

Leaders of the major homosexual groups in the state were there to testify.
[MassResistance photos]

President of PFLAG (Parents and Friends of Lesbians and Gays) radical national group that targets children in schools. 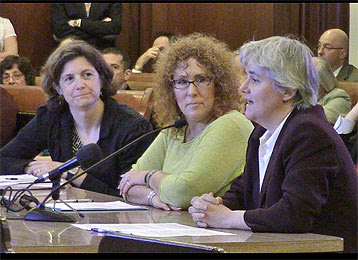 At right is mother of a “9-year-old transgender son” (i.e., a girl) who said the child gets “constant taunts and comments” at school — thus the need for the “enumerated category” of “gender identity.” 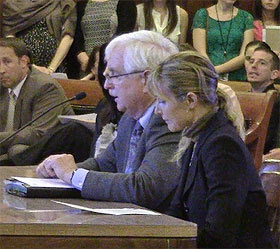 The committee was told over and over again how “enumerated categories” and the accompanying data collection is “very critical.” The “climate” of schools in the state towards homosexual and transgender behavior must be changed, they said. Even conversation that is “unkind” regarding homosexuality cannot be allowed!

The president of PFLAG described how they are ready to come in and conduct the mandated “training” sessions to students and faculty. “The current law does not go far enough” she told the committee, because teachers still do not properly address a boy wearing a dress as “she.”

The attorney from GLAD said that this bill will “take our bullying law and really make it work.” Specific enumeration and the gathering of statistics will greatly facilitate this, she said. GLAD representatives will be able to come in and “educate students about their rights.” And pro-homosexual teachers need the stronger law to effectively  “stand up” in ways they can’t now. It’s “inconceivable and inexcusable” that the law doesn’t have these things, she added.

Then Brian Camenker of MassResistance testified, and basically threw cold water on things.

Camenker also brought up the fact that the same weekend the 2010 bill passed, the Boston Globe published an article quoting behavioral scientists that these types of programs haven’t worked anywhere. That’s because they’re concocted by political activists to push a social agenda. And in this case, the 2010 bill passed without any amendments, by both houses unanimously with no substantial debate,during that period of media-induced anti-bullying hysteria.

Terrible vote as House passes H3909. As noted above, H3909, as horrible a bill as it is, sailed through the House on Feb. 24 by the lopsided margin of 145-4 (See the roll call vote HERE).  In other words, just about all of the Republicans voted for this monstrosity. Only Reps. Jim Lyons, Marc Lombardo, Keiko Orrall, and David Vieira had the sense enough to think for themselves and do the right thing. This ought to wake us all up.

The media PR campaign has started to come back — to arouse the public with emotional bulling stories and claim that “new legislation is needed.”  Here’s just one recent example.

The message that the legislature needs to hear:

The proponents of Bill H3909 are using the argument that the current anti-bullying law “isn’t working” and that it desperately needs to be “improved” by adding these new requirements and mandates.

If the current law is not working, then the public deserves to know exactly why. But to our knowledge, there have not been any actual studies of that.

And if changes need to be made, why aren’t actual behavioral scientists involved, instead of the same special-interest political groups that gave us the current law? These changes will only add more unfunded and unworkable burdens onto the public schools without any credible evidence that they will improve the bullying situation in any way.

Finally, it’s very disturbing that these changes are being predominately pushed by homosexual activist groups. This is clearly an attempt by the homosexual movement to hijack the anti-bullying law for its own narrow political ends. They do not appear to be the least bit interested in the general welfare of bullied children. It’s not worth risking the well-being of vulnerable children over this ill-gotten experiment.

This terrible bill must be completely rejected.

Right now the bill is in the Senate Ways and Means Committee. But any day now it could be sent to the Senate floor, where the danger of passing is greater! It needs to be “killed” in committee right now, before that happens.

Please feel free to contact MassResistance if you can volunteer more time to this, or if you need more information.