The battle to free 15-year-old Justina Pelletier from her custody — many have called it captivity — by the Massachusetts Department of Families and Children (DCF) bureaucracy has become even more heated over the past week. And it has continued to make news internationally and be documented across the Internet.

On Tuesday the Commissioner of DCF, Olga Roche, was forced to resign after three young children in DCF’s care were recently found dead through apparentnegligence by the department. The deaths of these children have shocked the region, and have taken some of the public’s attention off of the Justina Pelletier DCF case.

Governor continues to refuse to act

The Governor has continued to shamefully defend the process and claim that he can do nothing to stop it:

* Last week, Massachusetts Governor Deval Patrick stated that the decision to remove Justina from her parents was made “based on a detailed record of the history of neglect in the home.” That was blatantly false, and the local press wasted no time excoriating the Governor for this unwarranted attack on the family.

* But also last week, Governor told a family representative that he wanted to get Justina home and that his administration has “appeared in court to have her sent home to Connecticut” but that“the court has jurisdiction in this matter, not us.”

* On Thursday, the Governor’s Health and Human Services Secretary John Polanowicz wrote an email to the Connecticut media, where Justina’s family lives, saying that Massachusetts would like to release Justina, but “DCF does not have the authority to determine when and if custody should be returned to Justina’s parents” because of the judge’s ruling “that it is in the best interest of Justina to remain in DCF custody for now. “

Can the Governor free Justina? Given that she is a citizen of Connecticut, and given the other enormous irregularities of this case, and given that he controls DCF, it’s hard to believe that an executive order in that regard would not be possible. But if not, the Legislature can.

Bill to free Justina being temporarily blocked in Mass. House

The bill in the Massachusetts Legislature which would overrule the judge and free Justina immediately, HD 4212, written by MassResistance and filed on April 4, continues to be blocked by the Democratic leadership in the House, despite national outrage and a flood of calls and emails from across the country. (More about the bill can be found on our Free Justina Action Page.)

On Friday, the national conservative magazine Human Events reported on the bill,its blockage in the Legislature, and the controversy over whether the Governor has the power to free her himself:

“If Justina Pelletier dies in the state’s care, that’s on the hands of Gov. Deval L. Patrick,” said Brian Camenker, founder and executor director of Mass Resistance, a Waltham-based pro-family action center, who filed H.D. 4212 with the state House in early April. If signed into law, the measure would release 15-year-old Justina to her parents Linda and Lou Pelletier who reside in West Hartford, Conn.”

Members of the family describe Justina, who was an athlete and competitive skater in declining health and in a wheel chair, he said. “I don’t have the medical evidence but some say she could die.”

Protest at State House in support of bill to free Justina 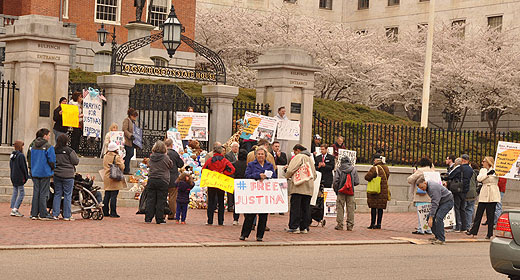 The demonstration for Justina outside of the State House.

On Tuesday, about two dozen people demonstrated outside of the Massachusetts State House to support Justina and demand the Legislature pass the bill to free her. They filled the outside steps with stuffed animals for Justina. Four Republican State Representatives who have been vocal on Justina’s behalf briefly came out and joined them in solidarity with their push to get the bill passed. 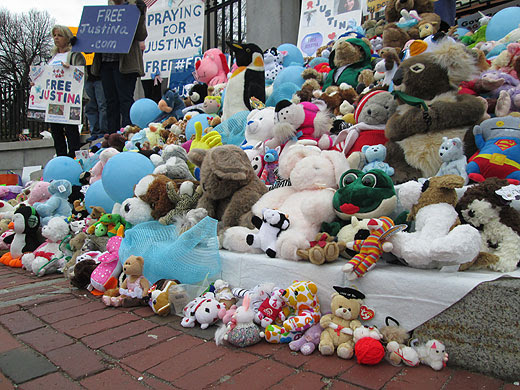 Over a hundred stuffed animals for Justina on the steps of the State House!

Administration’s claim to media shows why the Legislature must act!

The email sent by Massachusetts Health and Human Services Secretary John Polanowicz to the Connecticut media includes a number of disputed claims about Justina’s health and well-being while in DCF custody. However, it reflects the Governor’s position that no matter how he says he “feels” about the situation, he intends to let the Juvenile Court decision stand.

Thus, barring a successful court action by the family’s attorneys, such as the recent habeas corpus filing, Justina is at the mercy of the Juvenile Court judge, and by extension the DCF bureaucracy. But this is no “normal” case by any measure. The judge’s actions in this case have been excoriated even by liberal law professor Alan Dershowitz.

Besides a successful legal challenge there is only one other option: The Legislature can act to free Justina. But the Democratic leadership is bottling it up.

Continue pounding on the legislators to get this bill passed!

This week is being taken up by the budget deliberations in the Mass. House. But we’re not letting that stop us. Go to our Free Justina Action Page and keep the pressure up! (And to those in Massachusetts: If you are willing to go and lobby at the State House, let us know!)