As the international homosexual movement pushes “gay marriage” around the world, pro-family citizens in several countries are turning to MassResistance for help fighting back.

Last September – originally at the request of activists in Australia — we created our comprehensive 28-minute video, What “gay marriage” did to Massachusetts. It documents in chilling detail how “gay marriage” really changes society in less than a decade over a wide range of areas including schools, courts, businesses, churches, and more. The video is an expansion of our 2012 booklet, What same-sex “marriage” has done to Massachusetts. Thousands of copies of that booklet have poured across America — from Hawaii to Maine — and several foreign countries.

Here are some of the latest battles:

At the beginning of the year the well-funded international homosexual lobby begantheir lobbying push in Hong Kong to legalize “gay marriage.” Pro-family activists there began working with MassResistance in February.

They have just released a version of the MassResistance video with the audio in Cantonese (see above) . It is now being widely shown in Hong Kong. They told us that they are very pleased that now people can watch the video and it will “help them to understand” what they are really facing.

Last week the activists emailed us:

[This video] will definitely benefit more people to understand the seriousness of the issue involved. Without your kind support, we really cannot make this happen! Many thanks indeed!

Now they can see what may be on the horizon. On Monday, we received the following message from one of the Hong Kong activists:

The issue on Gender Recognition is creeping in as there is a recent court ruling to recognise the reassigned gender after sex reassignment surgery. I saw that Transgenderism is also forcing its way to school education at your side. The battle is getting increasingly tough…

We’ll be working hard for them as things develop.

The Finnish Parliament is about to begin debating a “gay marriage” bill. Back in February the homosexual movement submitted thousands of petitions to force the issue into Parliament.

In March a group of Finnish religious leaders contacted MassResistance. They began using our materials to educate their people. A few days ago they posted a version ofour MassResistance video with Finnish sub-titles and began promoting it across the country.

They have also distributed our materials to Parliament. This week religious leaders will be meeting with Members of Parliament on the issue.

Here’s what the Finnish religious leaders wrote us on Monday:

Your materials have helped us very much indeed. Finnish Parliament Law Committee have asked some church leaders to come in there on Wednesday the 7th of May for the interview concerning the same sex marriage legislation.

We have forwarded your materials all over the land and to all members of Parliament.

We have sent your video all over the country and people are surprised
to see it — many have woken up to understand serious consequences of that foolish legislation.

I am going to encourage the church leaders to stand firm on that issue.
Media is one of the worst enemies propagating solely the same sex marriage.

I will let you know what happens here. May God bless you and all of us who uphold traditional life values. Yours in common cause!

Here is one of their sites with information on the “gay marriage” fight.

They also informed us on Monday that one of the Finnish national televisionstations has agreed to broadcast the MassResistance video nationwide!

We have also just been informed that Swedish and Estonian language versions of the MassResistance video are being prepared for broadcast on national TV in those countries.

Back in the USA: Virginia

Back here in the US, pro-family citizens in Virginia are reeling from an outrageous federal court ruling in February where an activist federal judge struck down the state’s “gay marriage” ban voted by the people in 2006. One of the reasons the judge gave was that it conflicts with the phrase “all men are created equal” in the state’s constitution!

And Virginia’s Democrat Attorney General, Mark Herring, has refused to defend it in court, claiming that it violates the U.S. Constitution. Nevertheless, the ruling is being appealed by pro-family lawyers. The Federal Appeals Court in Richmond will hear oral arguments May 13.

In the meantime, pro-family activists are not letting up. Marriage activists contacted MassResistance in February and we’ve sent materials.

On April 24, Virginia activists released a powerful video on marriage to call together Virginians to a rally at the May 13 court hearing, and also a marriage rally in Washington, DC. Their video uses some of our MassResistance material, and is really worth watching. This is one of the best general “gay marriage” videos we’ve seen yet.

And many other battles over the last several months

For many across the country and around the world, MassResistance is the go-to place for pro-family activism and information. In addition to the above, in just the last several months we’ve worked with pro-family activists in Australia, Croatia, Jamaica, England, France, Ghana, Uganda, and Canada. And here in the U.S. we’ve worked with activists in Hawaii, Minnesota, Illinois, Utah, Idaho, Louisiana. We get more calls every week.

In addition, of course, we’re on the ground here in Massachusetts!

The homosexual movement is able to push “gay marriage” and its other agendas on a large scale because it receives millions of dollars from major US corporations, wealthy liberals, and in many places, your tax dollars.

Unfortunately, the front-line pro-family movement fighting back gets virtually no funding from corporations, conservative donors (who’ve chickened out on this issue – don’t get us started on that), and certainly not government. Even on good days we’re probably outspent by 500-1 (or worse).

Much of this is because the homosexual movement is constantly working to create a climate of fear. They are trying to make everyone afraid to even speak up, much less get involved. We’ve all seen that over and over.

Show your solidarity and help MassResistance keep fighting back

Hot off the press: We have brand new MassResistance stickers, suitable for car bumpers or anywhere else! Be a part of the not-so-silent majority. Show your solidarity with the international pro-family movement fighting back! Let the world know you’re not afraid. 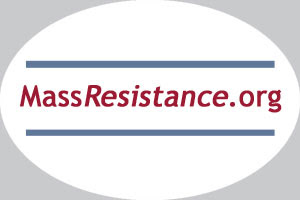 Over the next three weeks — until Memorial Day — in return for any size donation ($10 or more if using the credit card page) you will get two stickers.

We’re up against a funding behemoth, so front-line groups like MassResistance must get broad financial support from lots of ordinary people. It really makes a difference. We need your help to keep our fight going.

Especially if you haven’t donated before, this is the time to do it.

The big psychological weapon we have

Because our opponents thrive on our fear, one of the biggest psychological weapons the pro-family movement can use is to show that we’re not afraid of them — or of telling the truth. In our experience, that seemingly small thing is astonishingly effective.  It makes them uncomfortable and disoriented. It’s been a powerful tool against any totalitarian movement. In fact, Pope John Paul II attributed the ultimate fall of the Soviet empire to people’s acting without fear!