Exclusive report from MassResistance. Coming to your school soon.

What are the latest homosexual and transgender tactics targeting your schools? In the school “culture wars” nothing happens by accident. It is usually the result of careful planning and execution. Here is a look behind the scenes.

Homosexual teachers, school officials, and education activists (and their “allies”) — along with children as young as fifth grade — converged at GLSEN’s 2014 Annual Conference in Boston last month. At this “hands-on” event they to introduced and discussed their latest strategies for thoroughly pushing homosexuality and transgender issues and behaviors into the minds of kids. 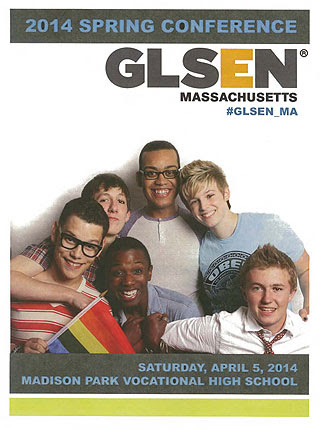 GLSEN (Gay Lesbian and Straight Education Network) is the nation’s largest homosexual and transgender activist organization working inside schools in all 50 states. It has set up “gay straight alliance” student clubs (GSAs) inside thousands of high schools (and even some middle schools) across the country. GLSEN pushes a wide range of psychologically penetrating homosexual and transgender programs activities into the schools, such as the controversial “Day of Silence”. It also directly organizes and trains teachers to integrate their techniques throughout the curriculum. Founded in the early 1990s by super-activist Kevin Jennings, it has a multi-million dollar budget, lavishly funded by corporate America and private foundations. The conference program.

In Massachusetts, much of GLSEN’s activities in the schools are funded with taxpayer dollars though the Massachusetts Commission for GLBT Youth. They are also closely coordinated through the State Department of Elementary and Secondary Education.

The all-day conference was held on Saturday, April 5, 2014, at Madison Park Vocational High School in Boston. It included keynote addresses outlining their overall plans and direction, and 21 workshops dedicated to specific topics and strategies, by both national and local experts.

It was attended by approximately 325 people. About two-thirds were students who were brought in from across the state — from middle schools, high schools, and (according to the conference organizers) some from elementary schools.

MassResistance was also there that day. We attended the keynote sessions, workshop sessions, and just about everything else.

The other objective: Using kids as the vanguard in schools

The GLSEN Conference is run by adults and is meant to train adults. But they go to great lengths to bring in as many students as possible, no matter how young. They come from schools across the state, and usually seem part of a “gay club” or affiliated with a homosexual activist on the school’s staff, such as a teacher or guidance counselor.

That’s because there are big roles for kids in the GLSEN strategies. Part of that is to be the “hands on” teaching of the new techniques. In the workshops, there is a fair amount of role-playing, for instance.

But even more important, the students are seen as the vanguard within the schools, to bring these ideas into the schools and interact with other kids and with authority figures in a way that other staff members can’t. For example, kids are trained to help form the gay clubs and other activities, how to talk about “coming out” to their friends, and how to deal with stubborn school administrators who resist these programs.

The Conference’s keynote speeches: Setting the tone for the kids

The opening session that morning included two keynote speeches, both directed at the students. In many ways, these set the tone for the rest of the day. A general message we got from both speeches was that there is no sense of truth, or reality, or of right and wrong. Any way you want to express yourself in life is fine.

The first keynote speaker was Eliza Byard, Executive Director of GLSEN, from their New York office. She told the kids about the necessity of being “out and proud.” She goes to a lot of schools, both here and overseas, and makes it a point to counsel kids and teachers to publicly “come out of the closet” and declare their homosexuality. And GLSEN will support you, she said. She’s also pushing the radical “pronoun” issue — taken from so-called Queer Theory and coming into schools — that people can decide for themselves whether they’re “he” or “she” or something else, and everyone else needs to adjust to that.

The second speaker was a student from western Massachusetts. who talked about her experiences as a GLSEN activist in her high school. She talked about “creating change” in the school, and how she does that, working with both students and adults. Small groups can make change, she said. But she said that “space must be available” for that to happen – i.e., accommodating teachers and school officials and “guidance by adults who allow youth to express themselves and not stifle themselves.”

Then, a middle school student spoke about how she helped organize the “Day of Silence” in her school. One teacher balked at having posters put up because of parent conferences that evening, saying that parents might not be comfortable that. The girl labeled the teacher “ignorant” and “no longer working at the school” (which caused a cheer). She said she’s a bisexual (in middle school!) and that her sister is a lesbian.

Below are some of the workshops from this year’s conference. This is what they’re training teachers and administrators to do, as well as the activist students. In one way or another, this is what you can expect to see coming up in your schools. A few of the topics had been introduced in past GLSEN conferences and are being refined. But all of them are about changing the schools and the minds of children in some way.

1.1 The Trevor Project: Empowering Youth to Save Lives!

Wondering how you can make an impact? Learn about The Trevor Project! We’ll discuss language, stereotypes and how to respond to signs of suicide. [Note: The “Trevor Project” steers kids to books portraying “gay” sex. See our MassResistance report.]

1.5 When a Teacher Makes a Gender Transition

We will share the successful experience of a faculty member’s gender transition at Milton Academy, K-12, as well as communications strategies, documents and lessons learned.

This workshop will provide participants with helpful tips for achieving healthy, successful collaborations between youth and adults in school and community based settings. [Note: The “youth and adult” connection in the homosexual movement is particularly disturbing.]

This workshop is a space for LGBTQ people to discuss the personal, professional, and political impact of being an LGBTQ teacher, particularly in a K-12 setting.[Note that this starts in Kindergarten!]

This workshop will serve as both a Trans* 101 and a resource for those looking for more knowledge about the rights of transgender students in schools.

2.2 When They Jump to Conclusions: Education on LGBTQ Topics

LGBTQ youth are often approached as “experts” on LGBTQ topics, by their parents and peers. Join QSA students in this engaging discussion on this multi-layered issue.

2.5 Reversing the Erasure of LGBT History

Using Los Angeles Unified School District and Lowell School District as case studies, this workshop examines strategies for introducing vital LGBT inclusive history curriculum into schools. [Note: The concept of “LGBT History” is an important psychological tool for legitimizing it to kids. It also introduces deviant figures such as Harvey Milk and NAMBLA activist Harry Hay as worthy of admiration.]

Practical advice and encouragement for students, staff, parents and community members who would like to establish a sustainable GSA in their local middle school.

3.2 Queering the Classroom: Providing a Safe Learning Environment for All

3.3 Coming out to Parents

Coming out to parents as LGBTQ is a big decision. Learn what to expect and get support. Interactive workshop and resources for participants.

This workshop will define partner abuse, the tactics of abuse, and discuss overcoming challenges for seeking support. The workshop will focus on Black/Latin@ LGBTQ communities. [Note: Abuse and violence in homosexual relationships has become such a problem in Massachusetts that it’s even discussed in “gay club” settings for kids and at “Youth Pride” activities.]

Participation in sports and Physical Education has positive effects health, self-esteem, sense of school belonging and academics. Unfortunately, some research suggests that LGBT students may not have access to these and they may be less likely than their non-LGBT peers to attend Physical Education classes or play sports teams. This session focuses on developing strategies to create inclusive conditions where all students can benefit from participation and learning. Note: This is the national homosexual movement introducing strategies for “queering” high school sports.]

Unfortunately, most people – and especially most parents – have no idea the extent of the radical homosexual and transgender psychological propaganda being pushed at children in their schools, much less what’s going on behind the scenes. We hope to begin to remedy that.

We’ve just scratched the surface on this Conference. In upcoming emails, we will be reporting in greater detail what took place in some of the workshops, as well as posting some of the handouts.