Experts in the world’s only settled science are up in arms today as a blunder committed by a staunch ally threatens their efforts to raise taxes and save the planet.

On a recent visit to Washington DC, French foreign minister Laurent Fabius told President Obama and Secretary of Climate John Kerry, “we have 500 days to avoid climate chaos.” The remarks came less than a week after the White House released its 829 page National Climate Assessment which introduced the term “climate disruption.”

“That French cretin wasn’t supposed to use ‘climate chaos’ yet!” screamed a government-funded climate scientist at a leading research facility, as he was polishing his hockey stick. “We just started using ‘climate disruption’ last week and hadn’t even come close to getting all the money and regulations we wanted from it yet. Dammit!” 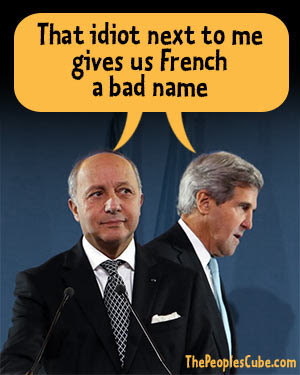 His colleague, a computer scientist, who was busy cooking fudge to mix with temperature data, concurred: “Fabius ruined our best new synonym by springing it far too early. The only good one we have left to use is ‘catastrophe.’ Good synonyms don’t grow on trees, you know. Thanks to morons like him, nothing else will either!”

Many in the climate science racket downplayed the damage. One expert, addressing a UN conference on sustainability via telephone from his 10,000 sq. foot mansion, told the only-mildly-inebriated delegates that there were still some good synonyms left to use, such as “calamity.”

“Besides,” continued Mr. Gore, “as someone once said, ‘What’s in a name? Bulls**t by any other name would still sell as sweetly.'”

“Climate science needs to start thinking out of the box on this,” stated Secretary of Climate Kerry. “Now Senator Reid, he suggested ‘Climate Koch Brothers’… I think he’s on the right track but I’m not sure it’s quite what we need at this crucial hour in earth’s history.”

Many in the movement are pushing the idea of using a phrase instead of a single word.

“The problem has gotten much too big for just one word,” said a state-approved media climate expert. “We’ve got to go bigger, something like ‘Climate Totally Bad F*cking Sh*tstorm’… that would get the deniers’ attention.”

But there are problems with that approach as well. “It wouldn’t fit on a bumper sticker” said one activist. “At least, not if you drive a Chevy Volt.”