Politely designed to be shown only after midnight to avoid the gaze of the kiddies, we feature in our very masterful masterpieces done by such masters of masterful mastering in the style of the late Anthony Trollope, a covey of well-larded British oldsters freckling in the gardens of the very posh town houses in which we set our bathetic dramas.

You will find them at least as casually masterful in their amorousness as they are in their equally masterful depictions of the glories of the English class system. Are these ancient crones mostly beyond mere puerile comeliness? Perhaps they are, what of it? Are they dead? Probably not. 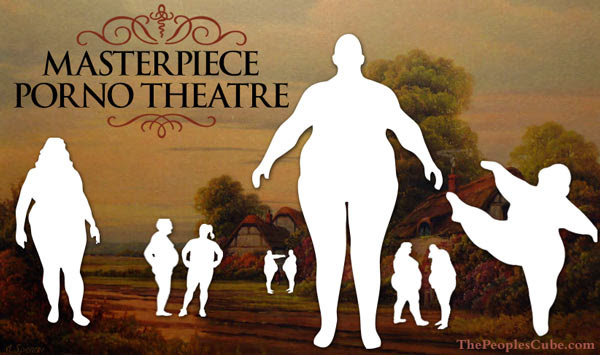 We are engaged here not in life or death, nor rank scholastic aesthetics, but in penetrating the America Public Broadcasting System to persuade the aging armies of formally educated innocents and dupes, rife in your swinish moors, bogs, and Academic baronies, that the American Revolution had never happened.

What better place to do it, after all, than planting our Tory faithful copulating within unctuous machines for pretense, wafting their electronic ecstasies on a supposedly prestigious television channel, one paid for amply, if hardly all that happily, by cozened American taxpayers?

You can’t blame us Brits for doing what we do well: among other things, pretense. You can’t even castigate us for pretending on American television that the American revolution never happened. If the Americans take up that pretense, why shouldn’t we?

We don’t ever give you Shakespeare or anyone who is a real English master in our most masterful masterpieces. We don’t even give you the reliably dogged Anthony Trollope. We give you cabbage-strewn fare worthy of Moe, Larry and Curly sporting obesely thick English accents.