I was in Miami yesterday afternoon and evening to attend the court hearing where six same-sex couples are suing the Miami Dade Clerk of Court asking the judge to strike down Florida’s Marriage Amendment which was passed by just under 5 million voters in 2008 when 62% of Floridians defined marriage between one man and one woman.

The courtroom was an older but beautifully ornate room that has been totally restored and is actually the same courtroom Al Capone was tried in years ago.   The courtroom was packed with about 60% supporters of marriage and about 40% gay rights activists.  There was an overflow courtroom with about another 150 people watching by video who were mostly our supporters.  Marriage supporters wore small signs saying “Respect my Vote”. 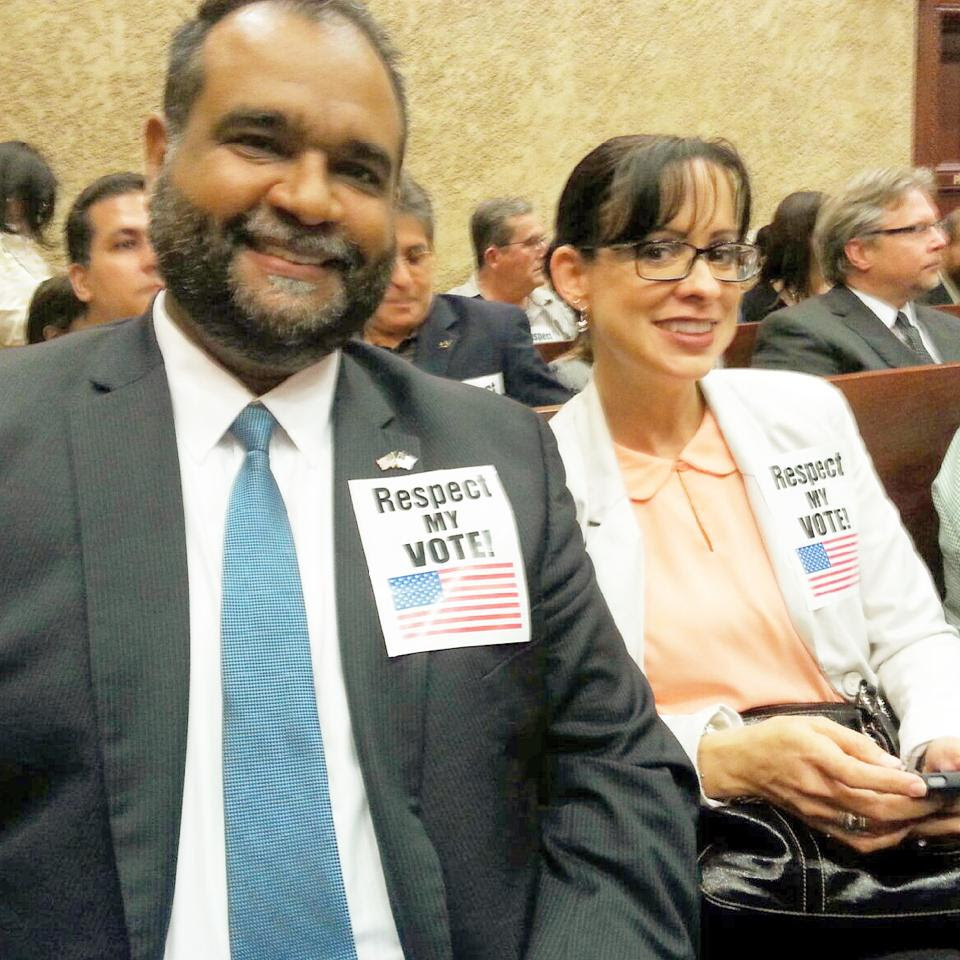 I appeared on behalf of Florida Family Action as “Amicus” (friend of the court) and Mat Staver of Liberty Counsel represented us.  I also presented an affidavit to the court which gave a very personal and detailed account of my motivation for leading the four year effort to pass the amendment.  The “Stemberger affidavit” was referred to several times during the hearing.

Overall, the legal arguments presented for same sex marriage were surprisingly weak.  After the first short legal argument, the other lawyers arguing spent a lot of time reading stories, citing antidotal evidence, misrepresenting the impact of multiple cases, and generally dispensing an assortment of inappropriate political rhetoric before the court.  In contrast, Mat Staver had a command of the law, the Constitution, legal procedure and the social science research.  His case was compelling and clear.  Not surprisingly, none of the plaintiff’s gay-rights lawyers ever cited let alone mentioned the only clear and controlling legal precedent before the court – Florida’s Constitution and its marriage definition.

One of the lawyers fo 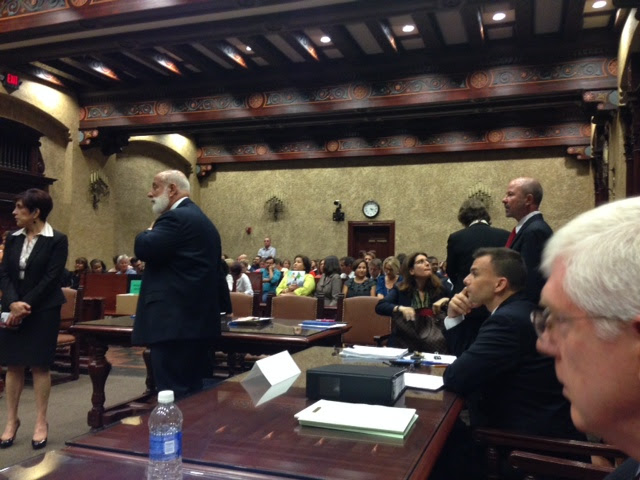 r the Plaintiff’s made the stunning statement that when we as voters amended the constitution to define marriage that this represented the “tyranny of the majority”. Seriously?  Amending the constitution is tyranny?  It was hard not to just LOL.

He then claimed that studies show “two parents are better than one” and that “gay people and straight people make equally good parents”.  But that is not the issue.  The comparison is not the mere quantityof parents — one vs two.  The issue is whether a mom and a dad are superior to two moms and what isbest for children.  And an enormous body of social science research is crystal clear.  Having both a mother and a father produces the highest levels of human flourishing for children.  And the absence of a mom or a dad produces significantly increased levels of social maladies.  This exposes the real weakness and problem with same sex marriage.  Their position devalues the uniqueness and importance of gender in the rearing of children.  Their Position has to be that two moms are just as good as a mom and a dad– and this is empirically false.  With all due respect to Mr. Mackelmore, (the white rapper) the love of a father is not the “same love” as a mother.  And law and policy should reflect the opportunity for children to have the best chance of having both a mom and a dad.

I was very thankful that the Attorney General’s office moved to intervene in the case and had a lawyer appear in person.  But it was disappointing that the lawyer only made one point in a couple of minutes and then quickly sat down.  Much was made by the other lawyers and the judge about the inadequacy of the AG lawyer’s response in the case but it was still good that they asserted the rights of states (through the people) to define marriage. 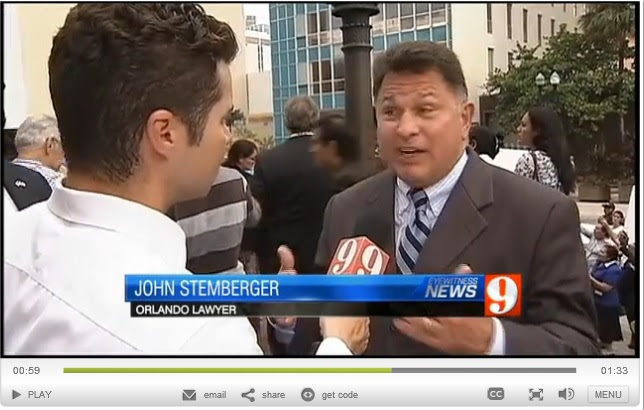 Lawyers for the Dade County Clerk of the Court who were sued as the Defendant stated that they were “neutral” in the matter and not taking a position.  But then in the next breath they reminded the court that Florida marriage license applications have the words “husband” and “wife” and asked the judge to tell them what to do if the court enters an order and same-sex couples go to get licenses with forms that are not “gender neutral”.  Neutral?  Not so much.

Even Orlando’s Mayor Buddy Dyer had a lawyer representing the City Council (using our local tax dollars) saying that they were in support of homosexuals marrying.  They argued that because Florida was an “anti-gay” state that we were losing “millions and millions” of dollars a year in revenue from same sex couples who might otherwise get married in Florida.  Between Disney “Gay Days”, Key West’s year round gay celebrations, no less than 25 gay-pride weeks and parades all over the state and the “gay-friendly everything” that goes on in Dade and Broward Counties, it was honestly hard for me to not just burst out in open court with laughter hearing this all argued with a straight face.  Anti-gay Florida?  The left plays fast and loose with the facts and indeed with reality itself. 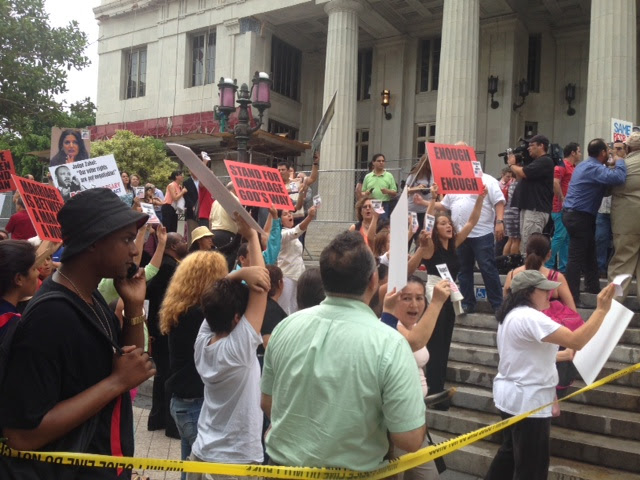 After the hearing there was a heated demonstration outside on the steps of the courthouse. Check out this video to the left linked into the image which shows the back and forth between the crowd.  The natural marriage supporters clearly out numbered and even dwarfed the homosexual rights protesters.  With the crowds shouting in the background I also did several TV and radio interviews and made statements in a press conference with Mat Staver.  The crowds were shouting back and forth to each other and were divided between yellow caution tape.  It was quite a circus and both emotions and security were high.

The high point of the whole day for me occurred after my last TV interview.  A young, neatly dressed reporter asked me several insightful questions and unusually inquisitive follow-up questions.  I did my best and gave him the most honest and sincere responses I could.  After the interview he pulled me aside and asked to speak with me privately.  He said, “Listen, I am an openly gay man.  But I want you to know how much I appreciate the answers you just gave to me and how respectful you were in talking about gay persons not even knowing that I am one of them.” Wow– Thank God for whatever grace he has given me to be able to make that kind of an impression on this young reporter.  Please pray for this man. 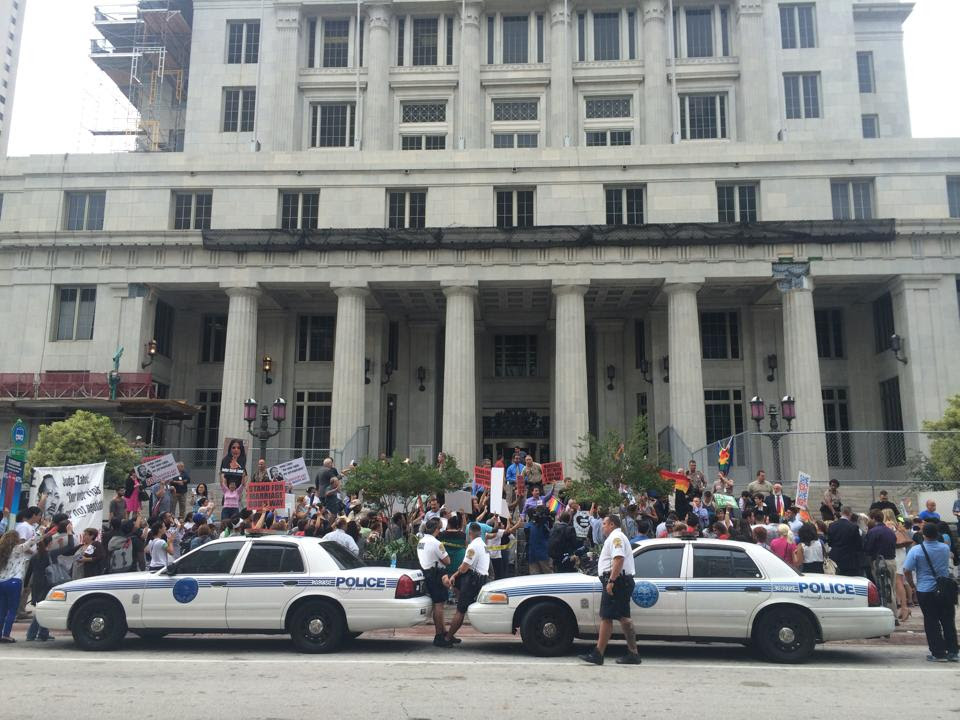 The judge did not rule from the bench after the hearing and it is unclear when she will rule.  The real concern here is that if the judge were to rule against our position (finding some new right of marriage out of thin air, defying the highest law of the land-Florida’s Constitution) then the six same sex couples could immediately run down to the courthouse and get marriage licenses.  Unless the Attorney General’s office files a motion to stay (halt) the judge’s order until the federal lawsuits are heard then the couples could be granted illegitimate marriage licenses based on a single judges opinion before any appeal and final hearing of the matter.

The judge sounded unapologetically warm and inviting to the plaintiff’s pro-gay rights positions.  Honestly, she sounded so biased it felt like she was coaching the oppositions attorneys and helping them to not forget certain points, etc… I was really taken back by how comfortable she felt just coddling the other side’s arguments in an open and public court.  Sadly, from my perspective she did not even try and attempt to appear neutral in her demeanor and questioning.  At this point we can only pray that she does the right thing.

But the bottom line is this–if the judge does her job and follows the law in Florida we will prevail.  If she ignores the constitution and ignores the will of the people, then she could rule against us and with a stroke of a pen strike down the vote and intentions of millions of Floridians.

Please continue to pray for us and for this case and follow us on Twitter and check out all of the photos of the hearing and rally on our Facebook page.  Stay tuned for further updates and news on this historic and developing story.  Thanks again for your faithful support of our mission to fight for life, marriage, family and liberty.