The day after its ruling in Hobby Lobby, the US Supreme Court granted review of the Thomas More Law Center’s petition on behalf of Eden Foods and its president Michael Potter, vacated the judgment, and remanded the case back to the Sixth Circuit Court of Appeals for further consideration in light of the Hobby Lobby decision.

The Thomas More Law Center (TMLC), a national public interest law firm based in Ann Arbor, MI, filed Eden Food’s initial challenge to the HHS Mandate in March 2013. After being denied a temporary injunction preventing enforcement of the HHS Mandate by a federal district court and the Sixth Circuit Court of Appeals, TMLC filed a petition for review with the Supreme Court.  That petition had been held in abeyance pending the decision in the Hobby Lobby case.

Eden Foods, co-founded by Potter in the late 1960s, is the oldest natural food company in North America and the largest independent manufacturer of dry grocery organic foods.  In 2009, Eden Foods was selected as the best food company in the world by Better World Shopping Guide, which also acknowledged the company’s outstanding record in social and environmental responsibility. The company employs 150 employees.

For years, Michael Potter, a Roman Catholic, President and sole shareholder of Eden Foods Corporation, for religious reasons, had arranged for the Blue Cross/Blue Shield insurance coverage he designed for his employees to specifically exclude coverage for contraception and abortifacients.  In accordance with his Catholic faith, Potter believes that any action which either before, at the moment of, or after sexual intercourse, is specifically intended to prevent procreation, whether as an end or means”—including abortifacients and contraception—is wrong.

The HHS Mandate forced Potter to make a choice between violating a foremost tenet of his faith or face fines up to $4.5 million per year.

Potter brought the lawsuit because he cannot compartmentalize his faith and his business practices.

Mr. Potter said in a statement, “We are grateful for the Hobby Lobby decision and look forward to further developments.” 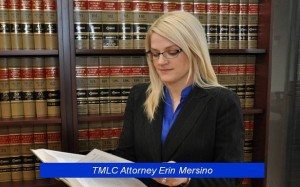 Erin Mersino, TMLC’s Senior Trial Counsel who is handling the Eden Foods case commented on yesterday’s Supreme Court order, “The Supreme Court’s ruling in Hobby Lobby preserves the religious freedom we are guaranteed under the Constitution.  The HHS mandate required business owners to directly violate their faith.  The Supreme Court relied upon the Religious Freedom Restoration Act (RFRA), which was signed into law by President Clinton and passed in a bipartisan effort to protect our First Amendment rights, to strike down the mandate.  Under RFRA, the government has to establish a basis for substantially burdening one’s religious faith.  Here, the government failed to do so.”

Mersino continued, “Justice Ginsburg’s dissent and proposed parade of horribles has no basis in reality.  No flood gates have been opened.  The truth is that the Supreme Court struck down an unjust law.”