We’ve all seen polls of professions that enjoy high credibility with the public – nurses, medical doctors, pharmacists and engineers top the list. At the bottom are car salesmen, Congressmen, advertising people, and stockbrokers. I used to believe that scientists had high credibility. Unfortunately, the group that call themselves “climate scientists” are destroying that credibility, for all scientists. They’re doing it so quickly I can hardly keep up.

There are three examples of reasons for skepticism:

U.S. Historical Climate Network data. For a larger view click on the graph.

Here’s an example from a leading claimant, Steven Goddard:

“NCDC is doing some impressive adjusting in President Obama’s home state, turning a measured cooling trend into a fake warming trend – by adjusting the data upwards at a spectacular three degrees per century.”

NCDC is the National Climatic Data Center; the data shown is from the US Historical Climate Network. Numerous other authors, after some initial questioning of Goddard’s methods, now agree that the “adjustments” being made are excessive, one sided, and cumulatively in the direction of an apparent “global warming.”

Let’s understand that adjustments to the raw data – the on-the-spot observation of temperature, mostly highly automated – are necessary. That’s because, over many years, our weather observing network has become surrounded by cities and major airports. A study conducted by Anthony Watts and a group of volunteers found that 90% of NOAA weather stations don’t meet NOAA standards for an observing site. You can read Watts’ report on the weather stations they investigated at. Perhaps the worst is the site now located in the parking lot of the University of Phoenix. The standard requires the observing site to be on a natural grass surface, several yards away from buildings or any source of heat. We have observing sites located next to a brick building, next to the outflow from the building air conditioner. At airports, we have observing sites out by the runway, where they get a blast of jet exhaust every few minutes. Those are the gross problems, but the whole phenomenon goes by the moniker of “urban heat island (UHI).” Concrete, asphalt, and brick buildings store heat during the day, and release it during the night; multi-story building air conditioners, cars, buses, pump heat into the urban air.

Remember, we’re trying to rely on data, with a precision of a few tenths of a degree, from this Historical Climate Network to make major policy decisions that will affect – and perhaps seriously damage – our economy for years to come. In addition, the USA, as a major financial supporter of the Third World, controls access to fossil fuel electricity generation in large parts of the world, such as sub-Saharan Africa. Such distortion of scientific fact dooms millions of poor African people to continuing poverty, hardship, and a shorter life span. Serious stuff.

So, it’s time to seriously rip those liars at NOAA and NCDC, right? Well, maybe not. NOAA is a Federal bureaucracy, and is subject to some amount of political pressure. I’d like to give NOAA some credit for trying to overcome the handicaps they have to deal with; the Urban Heat Island distortion of the data is serious. They have made a commendable effort to overcome it; it’s called the Climate Reference Network (USCRN). NOAA has completed a triply-redundant, pristine, state-of-the-art climate network nationwide that doesn’t require the adjustments and corrections that confuse older measurements. Here’s the network – you can read documentation and results here. There are 114 locations in the continental U.S., with 10 more in Alaska and Hawaii (see map on the right). As you see, there are five in or on the borders of Florida; all are completely automated, in pristine locations, but close enough to existing stations to be easily compared. Credit to NOAA; this is as good as it gets, and this network has been in operation for 10 years now. So, you ask, what does the data show? Glad you asked!

I’ve deliberately left off any trend line. The chart on the left is the U.S. temperature anomaly (the difference from average) over the last ten years, January 2005 to April 2014, plotted by NOAA. Sometimes the US average temperature is 4 C above normal (even around February 2012). Sometimes average U.S. temperature is below normal (such as around February 2010). See a trend? Neither do I. It’s weather. Kudos to NOAA for creating such a highly accurate network and to NCDC for putting the data out there. Hmmm, I wonder if Barack knows? It puts the lie to his assertions about climate change.

Earlier this year, it was expected an El Nino was developing in the Pacific Ocean. In such a situation, the tropical Western Pacific warms, the warming moves east, the storm track into the US drops south, the Santa Monica Pier gets wiped out, California and Arizona and New Mexico and west Texas and Florida get rain.

That forecast was wrong. The El Nino seems to be failing. Unfortunately, the failure of that warm, wet regime makes the long-range forecast worse. 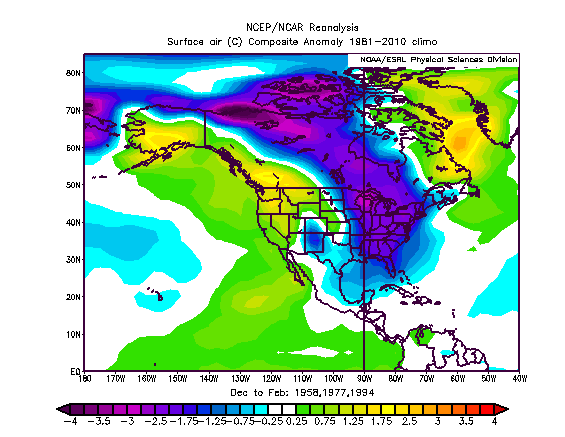 The conditions – mostly oceanic temperatures – that brought the U.S. the “polar vortex” last year are still in place. The Midwest is having a taste of polar vortex this week; Chicago is enjoying the coolth, and there will be remarks about the cool weather at the All-Star baseball game this evening in Minneapolis. It won’t be so enjoyable next December-January-February. Like to see a picture? This chart (right) is from the Icecap.us website, but the proprietor, Joe D’Aleo, is a principal in Weatherbell.com.

You’re seeing a preview of the information he sells to major companies. Doesn’t look good for Florida oranges.