As deadline passes, ALL radical bills in Massachusetts Legislature stopped cold — after heavy lobbying by both sides. This is what hard-hitting pro-family activism looks like!

At the close of the day on Thursday, July 31, the Massachusetts Legislature –- arguably the “bluest” in the country –- finished its formal sessions. All week the House and Senate were meeting and passing bills to beat the deadline.

Right up until the end, the homosexual/transgender movement and Planned Parenthood were lobbying hard to push their contentious, radical legislation still pending. Some bills were in a committee and could have been brought to the floor at any time; others were in a “study” but could have been lifted and brought to the floor if the leadership so decided.

MassResistance was fighting till the end to make sure all of those bills stayed off of the House floor. It’s been a rough week! A lot of people -– from all around the country-– got involved.

(We know what that “last-minute” fight to pass a bill is like! Back in 1995, despite the homosexual lobby’s efforts, we got our Parental Notification Law passed on the final day -– July 31 -– thanks to fierce lobbying from parents.)

We’re happy to say that we were 100% successful! All the radical bills got stopped.

Here are the top bills that (thankfully) didn’t make it:

(1) H3907 – Would have banned therapy for youth on homosexual issues

Passing this was the major goal of the homosexual movement in Massachusetts for this year.  MassResistance lobbied hard against it. This was a terrible bill that the national homosexual movement has been attempting to pass around the country.  It would have banned counseling for youth under 18 concerning sexual-orientation or sexual-identity issues. This could have caused horrific problems for innocent, vulnerable youth — many of whom were molested or experienced some sort of sexual trauma and who need professional help to heal and properly cope. Children and teenagers who desperately want and need counseling would have beed denied it if this had become law.

MassResistance had temporarily derailed the bill back in June. But last week the Ways and Means Committee announced the bill was back in play. So we immediately got back to work on it.

More about the bill and MassResistance’s effort to temporarily derail it. 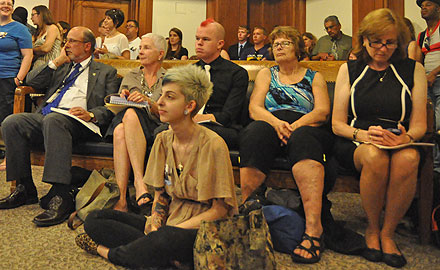 Well organized. Homosexual and transgender activists filled the room at the public hearing last August. At right is Arline Isaacson, lesbian lobbyist and organizer of the testimony. Waiting to testify, at left is Dr. Norman Spack, who runs a “gender-change” clinic for children at Boston Children’s Hospital. [MassResistance photo]

Planned Parenthood was determined to push this through and set up a special web page to help their people lobby for it.

This bill would have forced all schools to teach sexuality, birth control, abortion issues, homosexual and transgender issues, and similar subjects, in grades K-12, according to the “Massachusetts comprehensive health framework” – a document written by radical activists for the Department of Education.  Right now, using that document is only voluntary for schools. This law would have made it mandatory.

Even worse, this bill also re-wrote – and watered down — the current Parental Notification Law, which we worked so hard to pass back in 1995! 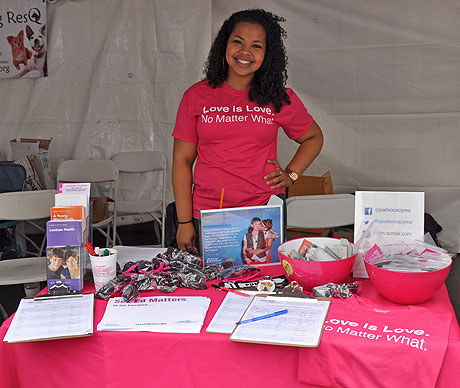 Planned Parenthood was VERY serious about this. They had a special
table at the Boston Gay Pride Parade Festival just to sign up volunteers to lobby for this bill. Their sign-up sheets were labeled “Sex Ed Matters.” [MassResistance photos]

(3) H1589 – Update to “transgender rights” bill to include public accommodations

This bill was the #1 goal of the transgender movement in Massachusetts this session. MassResistance lobbied hard against it. It would have extended the outrageous mandates and harsh punishments of the current “transgender rights and hate crimes” law to include restaurants, stores, health clubs, rest rooms, amusement centers, and all other places of “public accommodation.” For example, restaurants would have been forced to let men wearing dresses be “waitresses”, health clubs would have been forced to allow men to use the female locker rooms and showers, etc.

Titled “An Act relative to LGBT awareness training for aging services providers”, it would have mandated that all elder care workers in the state to undergo diversity training in “lesbian, gay, bisexual, and transgender” as a requirement for state certification.

This was yet another part of the latest LGBT efforts across the country to force everyone to accept their behaviors or be denied employment.

Titled, “An Act providing housing and support services to unaccompanied homeless youth,” this bill sounded innocuous enough. But it was being heavily lobbied for by homosexual groups — because it was actually a front for something much more devious:

If a middle school or high school youth decided to “come out” as a homosexual (or transgender) and his parents didn’t approve, radical activists planned to place him in alternative housing (with other homosexuals) paid for by the state, and legally take him from his parents’ home.

Current Massachusetts law describes homosexuality as “the abominable and detestable crime against nature.” Of course, that really angers certain special interests.  But we don’t think it’s a conversation most legislators wanted to engage in, and we weren’t going to let it go without a fight. The activists will have to try again next year.

Pro-family citizens can make a difference!

All this shows that pro-family citizens can make a difference. As you can see, some of these bills would have been devastating if passed. But many legislators simply follow the lead of the radical lobbies, and others just don’t pay attention. It’s absolutely necessary that pro-family people (1) educate the politicians, and (2) pressure them relentlessly. It’s quite amazing what that combination can accomplish. And it’s often horrible what happens when we don’t do it.

We won’t always win in the State House, of course, especially if enormous amounts of money,  political power, and/or a flood of media pressure are brought to bear. Examples of that are the new buffer zone law and also the transgender rights law, which we had stopped for three sessions in a row until the homosexual lobby brought in overwhelming political force.

But we’re getting better at this. And with your help our movement is making more and more of a difference.