More than eight out of ten Americans say that the misuse of guns in violent crimes is a matter for the criminal justice system, not a public health issue, and that the Centers for Disease Control (CDC) should not spend resources on the study of “gun violence” but instead concentrate on viruses and disease.

These findings are among the results of a national scientific poll of 1055 likely voters conducted live by telephone Sept. 30-Oct. 2. The National Shooting Sports Foundation (NSSF) commissioned this survey to determine whether adults share the view of some gun control organizations and activists that the use of guns in crime, for which they use the short-hand “gun violence,” is a public health issue. Some 71 percent of respondents said that the federal government should not classify gun violence as a public health issue in the manner of viruses and diseases.

When asked whether the definition of gun violence should be expanded to include accidents and instances of self-defense, nearly three-quarters of respondents said gun violence is a crime committed using a firearm with the intent to injure another person.

The survey was conducted by Harper Polling. The margin of error is +/-3.02 percent. Respondents self-identified as 38 percent Democrat, 33 percent Republican and 30 percent independent. As to ethnicity, 74 percent of respondents said they were White, 11 percent African-American, 8 percent Hispanic; and 7 percent, other. As to age, 25 percent of respondents said they were 18-39; 27 percent, 40-54; 23 percent 55-65; and 25 percent, 66 or older. 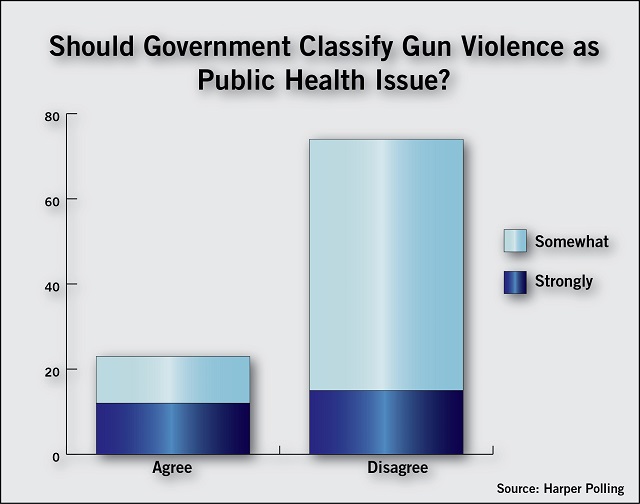 “As the significant challenges posed by the Ebola epidemic demonstrate, the emphasis of the Centers for Disease Control should remain on the study, prevention and containment of viruses and infectious disease,” said Lawrence G. Keane, NSSF senior vice president and general counsel. “For political reasons, many involved in gun control activism would like to re-define the criminal misuse of guns into a public health issue. We commissioned this survey to help determine where Americans stood on this issue. To put it plainly, they don’t buy it. And given the 20-year reduction in violent crime that the FBI reports, even as the number of firearms in the hands of law-abiding citizens has increased, they shouldn’t buy it.”

The National Shooting Sports Foundation is the trade association for the firearms industry. Its mission is to promote, protect and preserve hunting and the shooting sports. Formed in 1961, NSSF has a membership of more than 10,000 manufacturers, distributors, firearms retailers, shooting ranges, sportsmen’s organizations and publishers. For more information, visit www.nssf.org.