Most of us have probably seen Obama’s recent video in which he makes faces, poses in front of the mirror, blames himself over cookies, and draws a picture of Michelle Obama.

It is a little known fact, however, that when the President first took the pencil and focused on random visual ideas, he accidentally drew a picture of Mohammed. The filming stopped. The ruined sheet was ripped out of the sketchbook and tossed into the waste basket.

On the second attempt, as Obama sat in front of the blank sheet and tried not to think about Mohammed; his hand moved making random lines, which in the end, taken together, looked like Mohammed. That sheet also went into the waste basket. 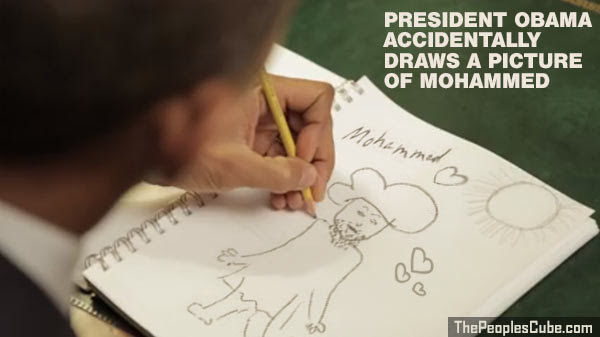 On the third, fourth, and fifth attempts Obama kept drawing Mohammed, in spite of his sincere efforts to draw just some random doodle. When on the sixth try Obama drew another picture of Mohammed, he asked for a break. The filming crew and the President had some milk and cookies, chatting about random things, like Tourette syndrome, Freudian slips, Rorschach blots, and obsessive-compulsive behavior exhibited by various random folks.

When, after the break, Obama drew the seventh picture of Mohammed, one of the filmmakers volunteered to draw a different picture for the President. This man was a storyboard artist, and even though he was not a real artist, he could still trace an image from a photograph. The only photograph in the room was that of Michelle Obama, and that’s what the man drew in the President’s sketchbook.

Obama then took the pencil and pretended that he was drawing his wife for the camera, but everyone in the room knew that he didn’t draw that.

A similar story happened with a different scene in the film, in which Obama was directed to try to dip an oversized oatmeal cookie into a narrow glass of milk. According to the script, the cookie wouldn’t fit and Obama was supposed to say sarcastically, “Thanks, Obama!” thereby gently mocking his critics who tend to blame everything on the President.

Instead, Obama kept trying to dip the cookie into the glass over and over for eleven minutes without saying anything. “No, Mr. President,” said the film director. “Try to dip it twice, then say sarcastically, ‘Thanks, Obama!'” The camera started rolling again. Obama tapped the cookie on the rim of the glass and said, “I know, this is Bush’s fault.” 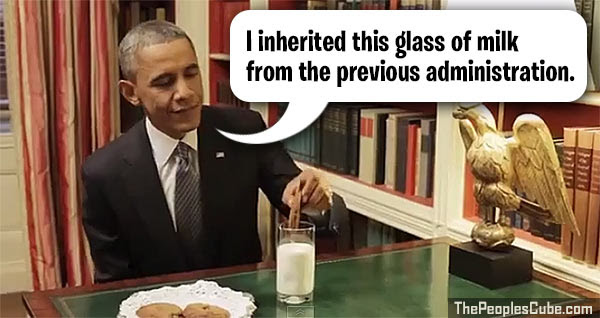 It took seven more takes for the film crew to finally tape the President dipping the cookie correctly while saying the scripted sarcastic words “Thanks, Obama!” instead of blaming Bush and insisting that he inherited this glass of milk from the previous administration.

It was already getting late, so the film director decided to abandon the script and asked the President to simply do random things he usually does when no one can see him. “I like to play air basketball and make faces in front of the mirror. Oh, and I also like to wear sunglasses and pretend to be a cool dude shooting random folks,” said Obama. 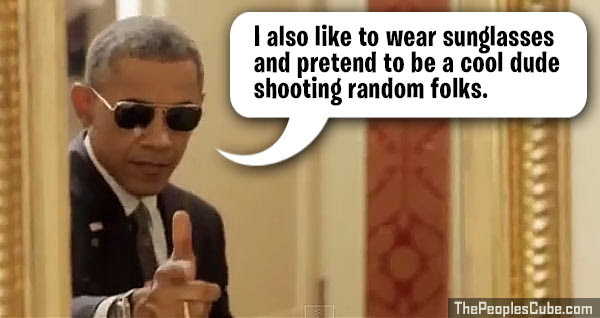 And that’s what they did, so the rest of the film was improvised and everyone had a lot of fun doing it.

And now you know the rest of the story.

WATCH THE VIDEO: Hilarious video reveals what President Obama does when he thinks no-one else is around