This Obamacare architect’s propaganda piece is a comic of errors by MATT PALUMBO:

In one of life’s bitter ironies, I recently found a book by Jonathan Gruber in the bin of a bookstore’s going-out-of-business sale. It’s called Health Care Reform: What It Is, Why It’s Necessary, How It Works. Interestingly, the book is a comic, which made it a quick read. It’s just the sort of thing that omniscient academics write to persuade ordinary people that their big plans are worth pursuing. 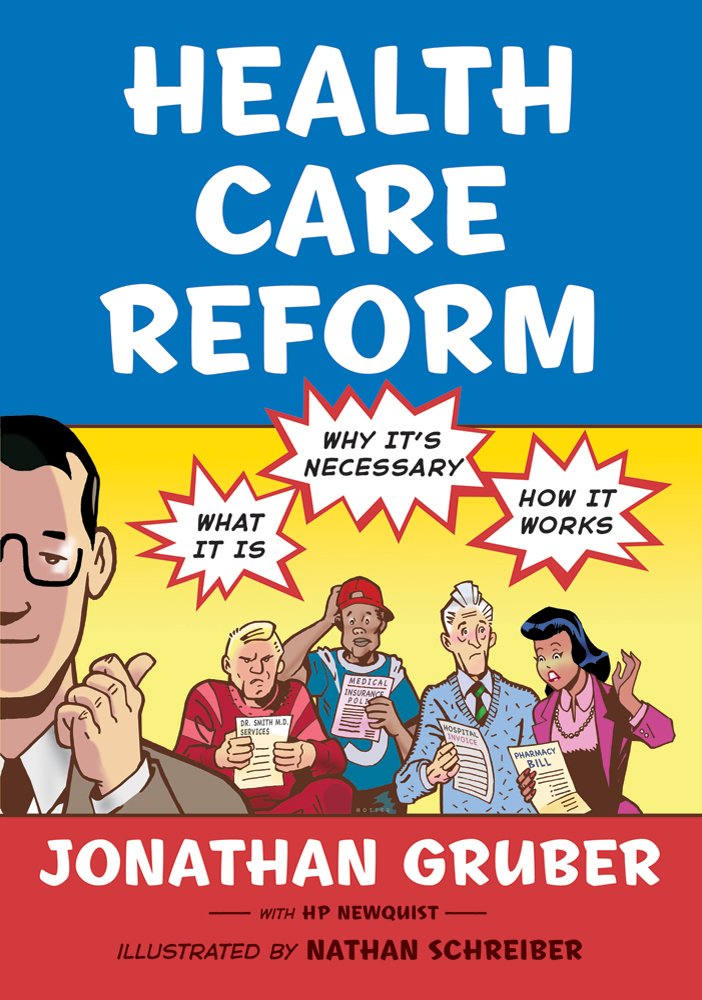 In case you’ve forgotten — and to compound the irony — Gruber is the Obamacare architect who received negative media attention recently for some controversial comments about the stupidity of the average American voter. In Health Care Reform, Gruber focuses mainly on two topics: an attempted diagnosis of the American health care system, and how the Affordable Care Act (the ACA, or Obamacare) will solve them. I could write a PhD thesis on the myriad fallacies, half-truths, and myths propounded throughout the book. But instead, let’s explore eight of Gruber’s major errors.

Error 1: The mandate forcing individuals to buy health insurance is just like forcing people to buy car insurance, which nobody questions.

This is a disanalogy — and an important one. A person has to purchase car insurance only if he or she gets a car. The individual health insurance mandate forces one to purchase health insurance no matter what. Moreover, what all states but three require for cars is liability insurance, which covers accidents that cause property damage and/or bodily injury. Technically speaking, you’re only required to have insurance to cover damages you might impose on others. If an accident is my fault, liability insurance covers the other individual’s expenses, not my own, and vice versa.

Gruber wants to compare health insurance to car insurance primarily because (1) he wants you to find the mandate unobjectionable, and (2) he wants you to think of the young uninsured (those out of the risk pool) as being sort of like uninsured drivers — people who impose costs on others due to accidents.

But not only is the comparison inapt, Gruber’s real goal is to transfer resources from those least likely to need care (younger, poorer people) to those most likely to need care (older, richer people). The only way mandating health insurance could be like mandating liability car insurance is in preventing the uninsured from shifting the costs of emergent care thanks to federal law. We’ll discuss that as a separate error, next.

Error 2: The emergency room loophole is responsible for increases in health insurance premiums.

In 1986, Reagan passed the Emergency Medical Treatment and Active Labor Act, one provision of which was that hospitals couldn’t reject emergency care to anyone regardless of their ability to pay. This act created the “emergency room loophole,” which allows many uninsured individuals to receive care without paying.

The emergency room loophole does, indeed, increase premiums. There is no free lunch. The uninsured who use emergency rooms can’t pay the bills, and the costs are thus passed on to the insured. So why do I consider this point an error? Because Gruber overstates its role in increasing premiums. “Ever wonder why your insurance premiums keep going up?” he asks rhetorically, as if this loophole is among the primary reasons for premium inflation.

The reality is, spending on emergency rooms (for both the uninsured and the insured) only accounts forroughly 2 percent of all health care spending. Claiming that health insurance premiums keep rising due to something that accounts for 2 percent of health care expenses is like attributing the high price of Starbucks drinks to the cost of their paper cups.

Error 3: Medical bills are the No.1 cause of individual bankruptcies.

Gruber doesn’t include a single reference in the book, so it’s hard to know where he’s getting his information. Those lamenting the problem of medical bankruptcy almost always rely on a 2007 studyconducted by David Himmelstein, Elizabeth Warren, and two other researchers. The authors offered the shocking conclusion that 62 percent of all bankruptcies are due to medical costs.

But in the same study, the authors also claimed that 78 percent of those who went bankrupt actually had insurance, so it would be strange for Gruber to claim the ACA would solve this problem. While it would be unfair to conclude definitively that Gruber relied on this study for his uncited claims, it is one of the only studies I am aware of that could support his claim.

More troublingly, perhaps, a bankruptcy study by the Department of Justice — which had a sample size five times larger than Himmelstein and Warren’s study — found that 54 percent of bankruptcies have no medical debt, and 90 percent have debt under $5,000. A handful of studies that contradict Himmelstein and Warren’s findings include studies by Aparna Mathur at the American Enterprise Institute; David Dranove and Michael Millenson of Northwestern University; Scott Fay, Erik Hurst, and Michelle White (at the universities of Florida, Chicago, and San Diego, respectively); and David Gross of Compass Lexecon and Nicholas Souleles of the University of Pennsylvania.

David Dranove and Michael L. Millenson at the Kellogg School of Management reexamined the Himmelstein and Warren study and could only find a causal relationship between medical bills and bankruptcy in 17 percent of the cases surveyed. By contrast, in Canada’s socialized medical system, the percentage of bankruptcies due to medical expenses is estimated at between 7.1 percent and 14.3 percent. One wonders if the Himmelstein and Warren study was designed to generate a narrative that self-insurance (going uninsured) causes widespread bankruptcy.

Error 4: 20,000 people die each year because they don’t have the insurance to pay for treatment.

If the study this estimate was based on were a person, it could legally buy a beer at a bar. Twenty-one years ago, the American Medical Association released a study estimating the mortality rate of the uninsured to be 25 percent higher than that of the insured. Thus, calculating how many die each year due to a lack of insurance is determined by the number of insured and extrapolating from there how many would die in a given year with the knowledge that they’re 25 percent more likely to die than an insured person.

Even assuming that the 25 percent statistic holds true today, not all insurance is equal. As Gruber notes on page 74 of his book, the ACA is the biggest expansion of public insurance since the creation of Medicare and Medicaid in 1965, as 11 million Americans will be added to Medicaid because of the ACA. So how does the health of the uninsured compare with those on Medicaid? Quite similarly. As indicated by the results from a two-year study in Oregon that looked at the health outcomes of previously uninsured individuals who gained access to Medicaid, Medicaid “generated no significant improvement in measured physical health outcomes.” Medicaid is more of a financial cushion than anything else.

So with our faith in the AMA study intact, all that would happen is a shift in deaths from the “uninsured” to the “publicly insured.” But the figure is still dubious at best. Those who are uninsured could also suffer from various mortality-increasing traits that the insured lack. As Megan McArdle elaborates on these lurking third variables,

Some of the differences we know about: the uninsured are poorer, more likely to be unemployed or marginally employed, and to be single, and to be immigrants, and so forth. And being poor, and unemployed, and from another country, are all themselves correlated with dying sooner.

Error 5: The largest uninsured group is the working poor.

Thus, the largest group of uninsured is not the working poor. It’s the middle class, upper middle class, illegal immigrants, and the young. The working poor who are uninsured are often eligible for assistance but don’t take advantage of it. I recognize that some of these numbers may seem somewhat outdated (the sources for all of them can be found here), but remember: we’re taking account of the erroneous ways Gruber and Obamacare advocates sold the ACA to “stupid” Americans.

Error 6: The ACA will have no impact on premiums in the short term, according to the CBO.

Interesting that there’s no mention of what will happen in the long run. Regardless, not only have there already been premium increases, one widely reported consequence of the ACA has been increases in deductibles. If I told you that I could offer you an insurance plan for a dollar a year, it would seem like a great deal. If I offered you a plan for a dollar a year with a $1 million deductible, you might not think it’s such a great deal.

A report from PricewaterhouseCoopers’ Health Research Institute found that the average cost of a plan sold on the ACA’s exchanges was 4 percent less than the average for an employer-provided plan with similar benefits ($5,844 vs. $6,119), but the deductibles for the ACA plans were 42 percent higher ($5,081 vs. $3,589). The ACA is thus able to swap one form of sticker shock (high premiums) for another (high deductibles). Let us not forget that the ACA exchanges receive federal subsidies. Someone has to pay for those, too.

Error 7: A pay-for-performance model in health care would increase quality and reduce costs.

This proposal seems like common sense in theory, but it’s questionable in reality. Many conservatives and libertarians want a similar model for education, so some might be sympathetic to this aspect of Gruber’s proposal. But there is enormous difficulty in determining how we are to rank doctors.

People respond to incentives, but sometimes these incentives are perverse. Take the example of New York, which introduced a system of “scorecards” to rank cardiologists by the mortality rates of their patients who received coronary angioplasty, a procedure to treat heart disease. Doctors paid attention to their scorecards, and they obviously could increase their ratings by performing more effective surgeries. But as Charles Wheelan noted in his book Naked Statistics, there was another way to improve your scorecard: refuse surgeries on the sickest patients, or in other words, those most likely to die even with care. Wheelan cites a survey of cardiologists regarding the scorecards, where 83 percent stated that due to public mortality statistics, “some patients who might benefit from angioplasty might not receive the procedure.”

Error 8: The ACA “allows you to keep your current policy if you like it… even if it doesn’t meet minimum standards.”

What, does this guy think we’re stupid or something?

Matt Palumbo is the author of The Conscience of a Young Conservative and In Defense of Classical Liberalism.