Former Top NASA Scientist James Hansen Predicts Catastrophic Rise In Sea Levels – ‘Projects sea levels rising as much as 10 feet in the next 50 years.’ The paper has already ruffled some, including Associated Press science writer Seth Borenstein, who said on Twitter that he would not cover it — primarily because it had not yet been peer-reviewed, a process that allows other scientists to critique the work. The Washington Post’s Chris Mooney asked other climate experts to weigh in on the paper. While many said it raised key discussion points, Kevin Trenberth of the National Center for Atmospheric Research called it “provocative and intriguing but rife with speculation and ‘what if’ scenarios.”

“James Hansen’s new paper ratcheting up future sea level rise numbers is consistent with the new strategy of the global warming activists. Given that current sea level rise rates are not alarming, the only way climate activists can claim anything is ‘worse than we thought’ is to make more dire predictions of the future.

Simply making scarier predictions of the future in order to alarm policymakers is not ‘good science.’ Claiming that climate change impacts are ‘worse than we thought’ because predictions are now more frightening is a well worn playbook of the climate movement.

It is not surprising that James Hansen — a man who has been arrested nearly half a dozen times protesting ‘global warming’ and who has endorsed a book calling for ridding the world of industrial civilization — would continue to make scary predictions. The world needs to take a collective yawn at Hansen’s latest claims and ask how in the world was this man ever allowed to be in charge of the NASA temperature datasets!” – End Morano statement. 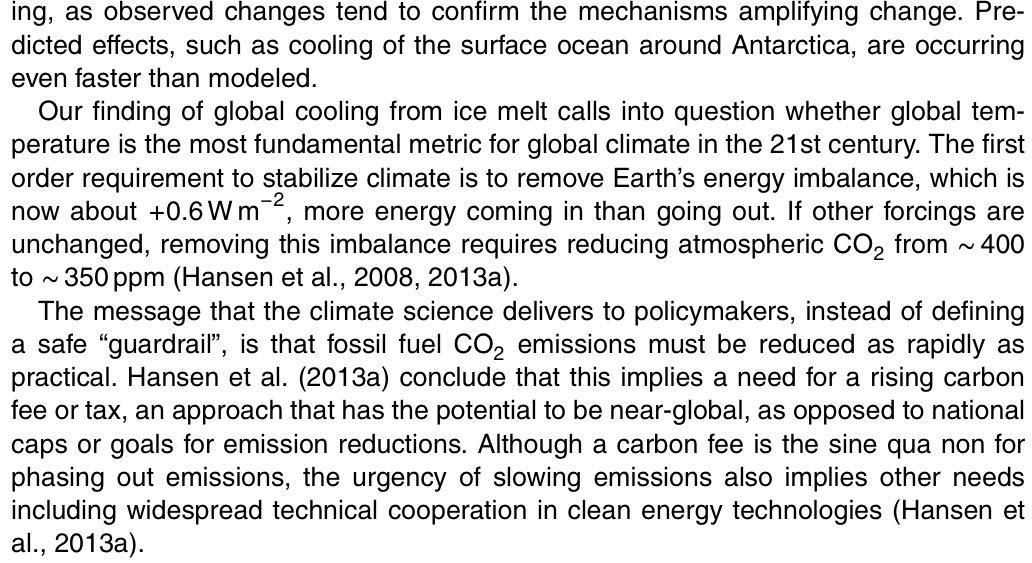 Warming leads to Cooling: Sea level rise could lead to a cooler, stormier world — Says unpublished work from NASA’s Jim Hansen – ‘A catastrophic rise in sea level before the end of the century could have a hitherto-unforeseen side effect. Melting icebergs might cool the seas around Greenland and Antarctica so much that the average surface temperature of the entire planet falls by a few degrees’.

NASA scientist James Hansen endorses book which calls for ‘ridding the world of Industrial Civilization’ – Hansen declares author ‘has it right…the system is the problem’ – Book proposes ‘razing cities to the ground, blowing up dams and switching off the greenhouse gas emissions machine’

Hansen Arrested (Again) — ‘For over a month now, much of the GISS website has been down due to technical problems. But apparently James Hansen has time to get himself arrested

Flashback 2010: David Roberts of Grist: ‘I know I’m not supposed to say this, but Hansen managed his transition from scientist to activist *terribly*. All influence lost’

Hansen Back in Jail! NASA’s James Hansen Arrested (Again) Outside White House at Pipeline Protest — Implores Obama to act for ‘sake of your children and grandchildren’

NASA scientist Hansen wants Obama arrested: ‘No news on whether Secret Service will be raiding NASA…Why bother going to moon when the moonbats already work for you?’

Debunking here  – Also see: Claim: ‘No change in sea level until modern times – but that change is dwarfed by sea levels of the past‘

Regardless, even the IPCC concedes that there was no significant anthropogenic influence on climate prior to 1950, thus man is not be responsible for sea level rise beginning 150-200 years ago, at the end of the Little Ice Age.

NASA’s James Hansen to Retire – Marc Morano Statement: ‘Celebrate! It’s A Happy Day for Science! Hansen’s sad legacy will serve as a cautionary tale for future scientists. Hansen chose ideology, activism, stagecraft and handcuffs over science. He will be sorely missed by global warming skeptics, as he made our life so much easier by just being himself. NASA & Science deserved much better than James Hansen.’

Background on Hansen: 1) NASA’s James Hansen, a muse to Eco-Terrorists?! Watch Now:Morano on Fox News: ‘NASA’s resident ex-con James Hansen is inspiring these people to potential acts of eco terrorism’ — Morano: ‘He was arrested for the 3rd or 4th time this past week protesting the pipeline. Hansen has endorsed a book calling for ridding the world of industrial civilization, for blowing up dams and razing cities to the ground and turning off our greenhouse gas machine’  —

2) Flashback: NASA scientist James Hansen endorses book which calls for ‘ridding the world of Industrial Civilization’ – Hansen declares author ‘has it right…the system is the problem’ — Book proposes ‘razing cities to the ground, blowing up dams and switching off the greenhouse gas emissions machine   —

3) Flashback: Greenie David Roberts of Grist turns on NASA’s Hansen: ‘I know I’m not supposed to say this, but Hansen managed his transition from scientist to activist *terribly*. All influence lost’ —

6)  Watch Now: Morano rips NASA’s James Hansen: ‘Hansen said we only have 4 years left to save the planet in Jan.2009, We passed another Mayan calendar deadline’  —

7) Flashback 2008: Don’t Panic Over Predictions of Climate Doom -Get the Facts on James Hansen— ‘High Crimes Against Humanity’ Trial for Climate Skeptics?

New York Times – June 11, 1986: “Average global temperatures would rise by one-half a degree to one degree Fahrenheit from 1990 to 2000 if current trends are unchanged, according to Hansen’s findings. Dr. Hansen said the global temperature would rise another 2 to 4 degrees in the following decade.”

In 1986, The World’s Greatest Climatologist James Hansen Predicted Nine Degrees US Warming By The 2020′s

Hansen to CNN: Selling nuclear energy to environmentalists is a tough pitch. Hansen acknowledged that many of them won’t easily buy into it. Parts of the community operate like ‘a religion of sorts, which makes it very difficult,’ Hansen said. ‘They’re not all objectively looking at the pros and cons.’

‘Only NUCLEAR power can SAVE HUMANITY’, say Global Warming high priests – Schism within the environmental ‘religion’

James Hansen denounces ‘big green’: ‘Large environmental orgs have become one of the biggest obstacles to solving the climate problem’ – Hansen: ‘After I joined other scientists in requesting the leaders of Big Green to reconsider their adamant opposition to nuclear power, and was rebuffed, I learned from discussions with them the major reason: They feared losing donor support. Money, it seems, is the language they understand. Thus my suggestion: The next time you receive a donation request, doubtless accompanied with a photo of a cuddly bear or the like, toss it in the waste bin and return a note saying that you will consider a donation in the future, if they objectively evaluate the best interests of young people and nature.’

EDITORS NOTE: Marc Morano is no only the publisher of Climate Depot but also the producer of the upcoming film ‘Climate Hustle’ (www.ClimateHustle.com).