A new record Pause length: no warming for 18 years 7 months

By Christopher Monckton of Brenchley

For 223 months, since January 1997, there has been no global warming at all (Fig. 1 below). This month’s RSS temperature shows the Pause setting a new record at 18 years 7 months.

It is becoming ever more likely that the temperature increase that usually accompanies an el Niño will begin to shorten the Pause somewhat, just in time for the Paris climate summit, though a subsequent La Niña would be likely to bring about a resumption and perhaps even a lengthening of the Pause.

The hiatus period of 18 years 7 months is the farthest back one can go in the RSS satellite temperature record and still show a sub-zero trend. The start date is not cherry-picked: it is calculated. And the graph does not mean there is no such thing as global warming. Going back further shows a small warming rate.

The Pause has now drawn blood. In the run-up to the world-government “climate” conference in Paris this December, the failure of the world to warm at all for well over half the satellite record has provoked the climate extremists to resort to desperate measures to try to do away with the Pause.

Other Climate Depot news items of this week:

Fmr. NASA Scientist James Hansen: Obama’s climate policy is ‘practically worthless’ – ‘You’ve got to be kidding’ – Hansen on Obama EPA climate regs: ‘The actions are practically worthless. They do nothing to attack the fundamental problem.’ “You’ve got to be kidding,” Hansen wrote, when asked if the plan would make continued climate activism unnecessary. Obama’s plan, and for that matter the proposed plan Democratic front-runner Hillary Clinton, he continued, “is like the fellow who walks to work instead of driving, and thinks he is saving the world.”

Watch: Morano on Fox on EPA ‘Climate’ Plan: ‘This is a nonsensical plan when it comes to climate with a lot of economic pain’ – Fox Business Host Stuart Varney – ‘Varney & Company’ – August 5, 2015 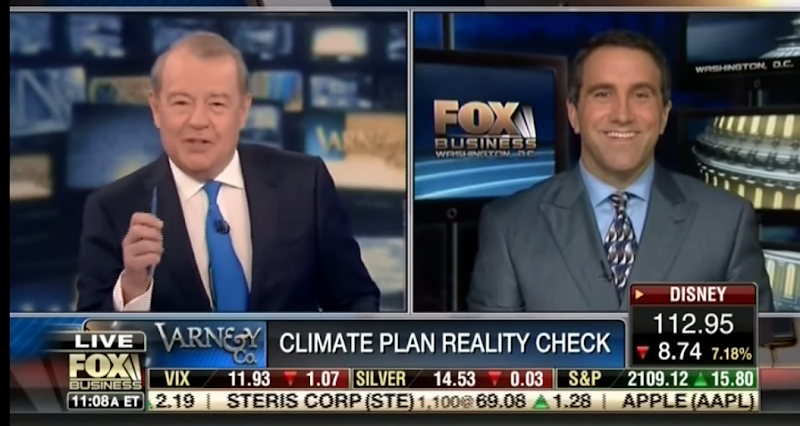 Morano on Obama’s EPA ‘Climate’ Plan: ‘They are selling us a bill of goods. Even if you believed it, this is a nonsensical plan when it comes to climate with a lot of economic pain.’ – ‘NASA’s former lead global warming scientist James Hansen came and said this plan is ‘practically worthless’ and he said ‘you’ve got to be kidding me’. Obama’s own EPA chief admitted it would have no impact on global temperature let alone impacts on global CO2 levels. It’s pure symbolism.’ 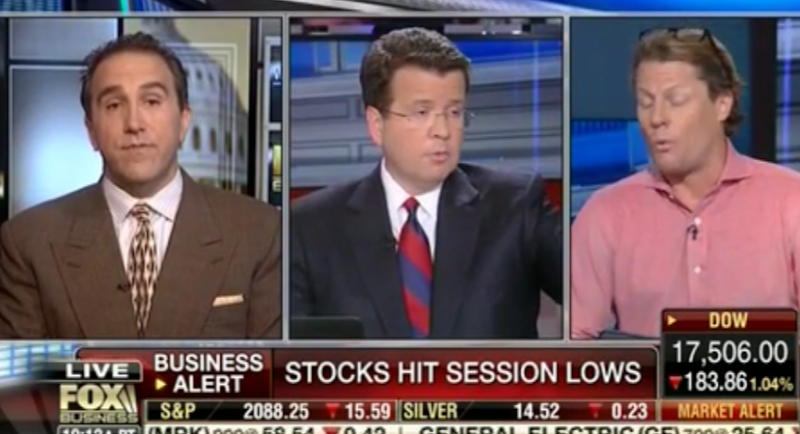 MORANO: “The EIA (U.S. Energy Information Agency – 2013) estimates that wind is about 4% of our energy and solar is about .25 of one percent! So you are asking for less than 5% of energy to somehow cover all of these carbon based regulations. We have Obama administration officials like White House Science Czar John Holdren who openly talk about cheap energy being a threat or a hazard to a free society.”

MORANO: “We do know one thing that there will be no climate impact form these bills.”

Chip Knappenberger on CNN: Obama plan’s ‘impact on climate turns out to be largely undetectable and the public health benefits tenuous, at best’ – ‘The human health benefits of the President’s plan do not largely stem from the reduction in carbon dioxide emissions. After all, carbon dioxide is a colorless, odorless gas that is not dangerous to breathe. Instead, they are to come from the “co-benefits” of reducing some forms of air pollution that are emitted when fossil fuels are burned. But these by-product emissions are already subject to existing regulations and are being double-counted by the President. Further, direct health impacts from climate change are difficult to pin down — and ethereal — as adaptive measures can more than erase them.’

Analysis: EPA ‘climate’ plan will take ‘33% of productive electrical capacity off the grid by 2020′

Key Points: ‘Report shows that the plan would close 48% of all coal-fired plants in the country.’

This plan is “regulation without representation.”

‘The president’s rules would usurp the traditional role of states in managing their own electrical generation and saddle the economy with enormous costs while empowering the EPA to control vast swaths of the American economy.’

‘Coal-fired power will be the first to be shot, but the EPA is targeting all sources of carbon energy.’

Climate Scientists Rip Apart EPA’s Global Warming Rule – “Well the one thing you don’t hear President [Barack] Obama mention is how much his proposed emissions reductions will reduce global warming,” wrote Dr. Judith Curry, a climatologist at Georgia Tech. “It has been estimated that the U.S. [climate plan] of 28% emissions reduction by 2025 will prevent 0.03 [degrees Celsius] in warming by 2100.” “And these estimates assume that climate model projections are correct,” Curry wrote, “if the climate models are over-sensitive to CO2, the amount of warming prevented will be even smaller.”

Environmentalists, EPA Force The 200th US Coal Plant To Retire

Asthma prevalence has increased in the U.S. while major air pollutants like ozone, particulate matter and carbon monoxide have fallen dramatically, according to government data.

A study by John’s Hopkins Children’s Center published in January found there is no link between air pollution and childhood asthma.

Global warming threat? Now it’s asthma: Morano: ‘This is pure propaganda’ – ‘Obama has shifted the debate to children and asthma because he knows the public is not buying global warming’

Watch Now: Prof. Ross McKitrick on Obama EPA regs: The health claims ‘are groundless’ – ‘Carbon dioxide is not a factor in smog or lung issues’ – Rips Obama for deceptive language: ‘Instead of calling it carbon dioxide, we are just going to call it ‘carbon pollution’

McKitrick on Sun News on June 2, 2014 – McKitrick on Air Pollution: The models get ‘more deaths from air pollution than you were death from all causes’- ‘Particulates and soot are at such low levels in the U.S. — levels well below what they were in the 1970s. The health claims at this point are groundless coming from this administration. I noticed these numbers coming up for Ontario for how many deaths were caused by air pollution. What struck me — was knowing that air pollution levels were very low in Ontario — but they were extremely high in 1960s. So I took the same model and fed in the 1960s air pollution levels into it: How many deaths would you get? I did the calculations and you quickly get more deaths from air pollution than you were death from all causes. In other words, the streets would have been littered with bodies from air pollution if it was actually that lethal. The problem with all of these models is they are not based on an actual examination of death certificates or looking at what people actually died of — these are just statistical models where people have a spreadsheet and they take in an air pollution level and it pops out a number of deaths. But there are no actual bodies there, it is all just extrapolation.’

Obama Moves To Regulate CO2 From Airplanes – First tailpipes, then power plants and now airplanes. The Obama administration announced another major effort to regulate carbon dioxide emissions from airplanes after the Environmental Protection Agency linked airliners to global warming. The EPA issued a proposal Wednesday declaring that CO2 from airliners threatens public health because it contributes to global warming. The agency says it’s doing this in conjunction with an international effort to bring the airline industry under global carbon dioxide standards for commercial jets.

Obama Harvard Law School Prof Lawrence Tribe on EPA Climate Regs: ‘BURNING THE CONSTITUTION CANNOT BE PART OF OUR NATIONAL ENERGY POLICY’ – Laurence Tribe, a liberal constitutional scholar at Harvard University: “EPA possesses only the authority granted to it by Congress,” Tribe told lawmakers in a hearing Tuesday. “Its gambit here raises serious questions under the separation of powers… because EPA is attempting to exercise lawmaking power that belongs to Congress and judicial power that belongs to the federal courts.”

The term ‘carbon pollution’ is unscientific and misleading: ‘Phrase conflates carbon dioxide with noxious chemicals like carbon monoxide and black carbon’ – ‘The phrase ‘carbon pollution’ is scientifically inaccurate because there are more than ten million different carbon compounds, and the word ‘carbon’ could refer to any of them. Some of the more notorious of these compounds are highly poisonous, such as carbon monoxide (a deadly gas) and black carbon (the primary ingredient of cancerous and mutagenic soot). Using a phrase that does not distinguish between such drastically different substances is a sure way to misinform people.’

EPA regulations on CO2 will accomplish nothing for climate or public health: Obama using ‘diversionary tactic to conflate CO2 with the actual ‘carbon pollution’ of atmospheric particulate matter, to deflect criticism from Obama’s draconian CO2 proposals’

Warmists: ‘Obama Wants You to Think His Climate Plan Is Bold. It’s Not.’ – By Eric Holthaus – Vox’s Brad Plumer has calculated that the president’s rule would shave just 6 percent from U.S. carbon emissions by 2030. Climate science and international equitydemand the U.S. cut emissions 80 percent by then. We’re nowhere near that pace. Still, this plan is not nothing. In its coverage, the Times includes this hopeful gem: But experts say that if the rules are combined with similar action from the world’s other major economies, as well as additional action by the next American president, emissions could level off enough to prevent the worst effects of climate change. That’s a lot of hedging on which to base a climate legacy.  In fact, when compared with the climate plans of his would-be successors on the left—Hillary Clinton, Bernie Sanders, and Martin O’Malley—Obama ranks last in terms of ambition. Clinton, who has frequently aligned herself with the president on climate, announced a preview of her own climate plan last week. It’s fractionally more ambitious than Obama’s, but it essentially just kicks the can forward another few years.

Watch: Morano on Fox on new Fed fracking regs: ‘They are going after the foundation of fracking’s success’ – Watch Video here: Fox Business ‘Varney & Co.’ w/ Stuart Varney – March 20, 2015 – ‘Will new fracking regulations kill the industry?’ (See: Obama Admin Imposes New Regulations On Fracking) – Morano selected excerpts: It’s the first step to the death of a thousand cuts, and this is probably the first 200 or 300 blades being introduced by the federal government — but it’s not going to kill fracking now. This will impose a one size fits all federal government solution.

They are going after the foundation of fracking’s success. Obama is already taking out coal, they’ve stopped keystone pipeline, they are preventing oil drilling in places like Alaska. What’s left? Fracking. Solar is .23% of our electricity (EIA 2013), wind power is barely over 4% and their implication is they will replace carbon based fuels with solar and wind.

Morano: ‘It’s the agenda here: John Holdren said in 1970s that energy that is too cheap is one of the greatest hazards to society and the more we get away from energy, the more jobs we will have. (See: Flashback 1975: Obama Science Czar John Holdren warned U.S. ‘threatened’ by ‘the hazards of too much energy’ – Holdren: ‘Less energy can mean more employment.’)

The Energy Sec. Moniz has said he wants to make ‘dirty fuels’ three times more expensive. This is the first step towards that. (See: Obama Energy Dept. nominee favors TRIPLING the cost of fossil fuels – Energy Nominee Moniz: We Need Carbon Price To Double Or Triple Cost Of Dirty Energy) 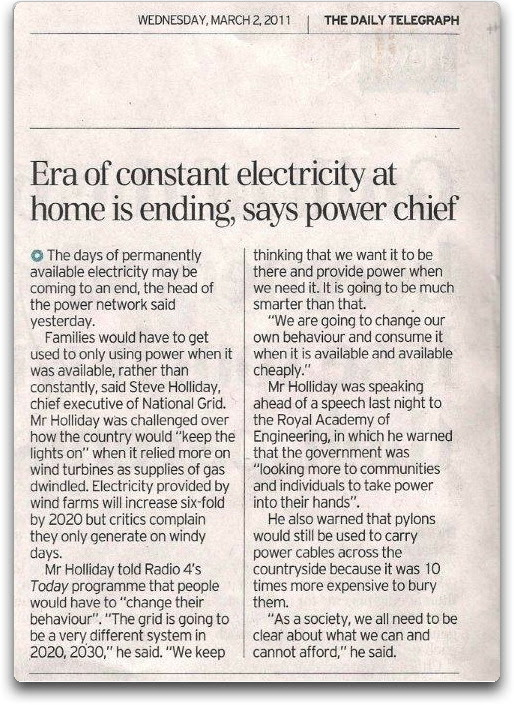 Flashback 2011: ‘Era of Constant Electricity at Home is Ending, says UK power chief’ — ‘Families would have to get used to only using power when it was available’

How Economic Control Threatens Political Liberty, Free Speech and the Rule of...
Scroll to top