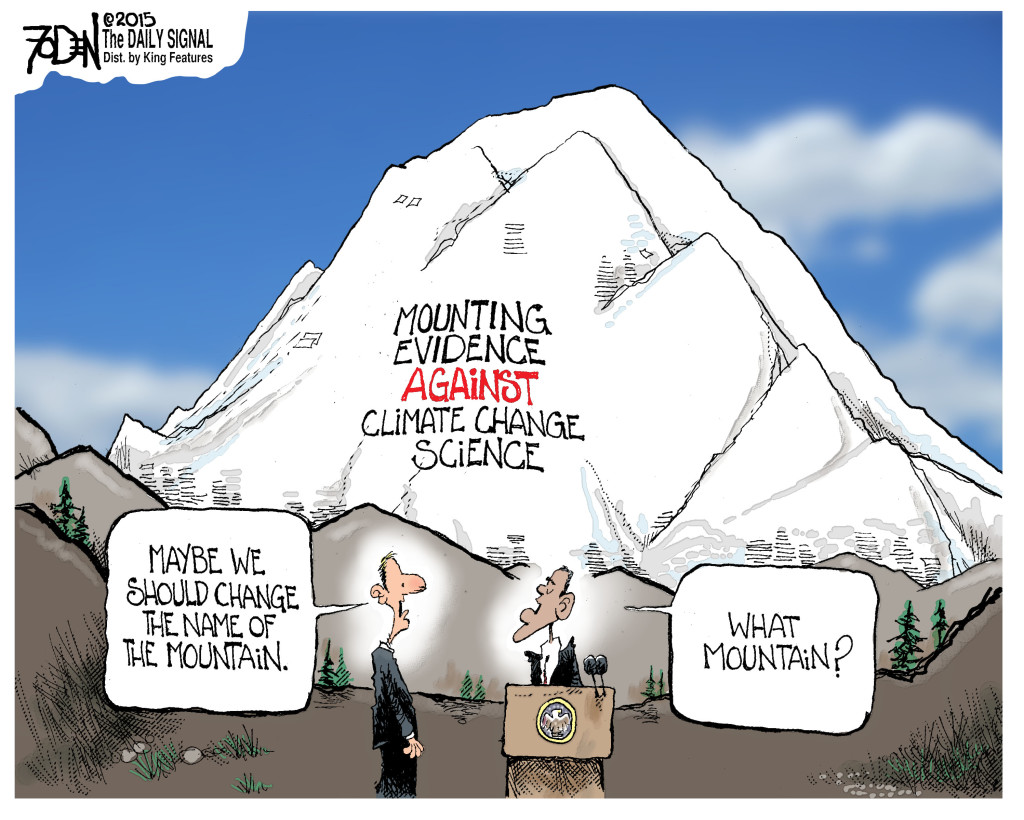 President Obama seems to have missed the three absolutes about the climate: 1) the climate changes; 2) the changes are cyclical; and 3) there is nothing mankind can do to change these natural cycles.

The only thing mankind can do about climate change is prepare for the changes.

Paul Driessen, TownHall, in a column titled “Climate issues we do need to address” writes:

We need to fix the climate of fraud, corruption, and policies that kill jobs, hope and people.

EPA’s 2,691-page Clean Power Plan is designed to eliminate coal mining and coal-fired power plants – and minimize natural gas substitutes. The CPP requires that gas use can increase by only 22% above 2012 levels by 2022, and just 5% per year thereafter. On top of that, new natural gas-fueled generating units that replace coal-fired power plants absurdly do not count toward state CO2 reduction mandates.

President Obama gave a doom and gloom speech yesterday at the Global Leadership in the Arctic (GLACIER) conference in Alaska to build momentum for the U.N. climate deal in Paris this December.

So far less than one third of countries have submitted plans to cut carbon dioxide emissions by the Wall Street Journal’s count.

According to Obama, “Climate change is happening faster than we’re acting” and the world is facing a future of more fires, more melting, more warming, more suffering.

But there are at least two major problems with his focus on global warming as he’s presented it in Alaska.

Obama continues to ignore science that doesn’t fit his narrative and has ignored sound evidence from people who disagree with him. Many of the environmental trends Obama has warned of do not appear to fit current realities.

In his speech he warned that,

“If [current] trend lines continue the way they are, there’s not going to be a nation on this earth that’s not going to be impacted negatively…More drought, more floods, rising sea levels, greater migration, more refugees, more scarcity, more conflict.”

Click on the image for the full Heartland Institute report.

However, Judith Curry, professor at Georgia Institute for Technology and participant in the International Panel on Climate Change and National Academy of Sciences, writes that when politicians talk about an undeniable climate “consensus” they are brushing over “very substantial disagreement about climate change that arises from:

All this leaves multiple ways to interpret and reason about the available evidence.”

Mt. Baker glaciers disappearing? A response to the Seattle Times

Report: The Top 10 Global Warming Lies of the Left