The media is once again attempting to portray the current California drought as historically unprecedented. See: Californian water source at 500-year low: “We should be prepared for this type of snow drought to occur much more frequently because of rising temperatures,” lead author Valerie Trouet, a professor at the University of Arizona, said in a statement. “Anthropogenic” –- or manmade –- global warming “is making the drought more severe,” she added.

Two new studies show that global warming is not behind California drought – there is a gigantic warm blob in the Pacific Ocean that is fueling California’s four-year-long drought, and it has nothing to do with global warming. Two new studiesreleased in the journal “Geophysical Research Letters”, explain how this large expanse of warm ocean water is affecting California’s weather as well as the East Coast’s past two brutal winters. Read more here.

Other studies counter the notion that California is experiencing unprecedented drought.

AMS Journal study finds California drought is ‘not unprecedented’ over past 440 years: 9 other droughts as bad or worse – Published in American Meteorological Society journal – Study: ‘An analysis of the October 2013–September 2014 precipitation in the western United States and in particular over the California-Nevada region suggests this anomalously dry season, while extreme, is not unprecedented in comparison with the ~120-year long instrumental record of water year (WY, October–September) totals, and in comparison with a 407-year WY precipitation reconstruction back to 1571. Over this longer period nine other years are known or estimated to have been nearly as dry or drier than WY 2014. The three-year deficit for WY’s 2012–2014, which in the California-Nevada region exceeded the annual mean precipitation, is more extreme but also not unprecedented, occurring three other times over the past ~ 440 years in the reconstruction.’

NOAA Study: Causes of Calif. drought are natural, not man-made – Natural weather patterns and climate variability, not man-made global warming, are causing the historic drought that’s parching California, says a study out today from federal scientists. “It’s important to note that California’s drought, while extreme, is not an uncommon occurrence for the state,” said Richard Seager, report lead author and professor with Columbia University’s Lamont Doherty Earth Observatory. The report, “Causes and Predictability of the 2011-14 California Drought,” was sponsored by the National Oceanic and Atmospheric Administration (NOAA).

E&E News on 2012 U.S. drought: ‘For the scientists who take the long view of history, it’s merely a climatological blip’ — 1930s ‘Dust Bowl & 1988 both eclipse 2012 drought, scientists say’ – ‘Scientists say [2012] drought is practically embryonic compared with severity & extent of others in America’s past…The Dust Bowl held on for as many as 8 years in some parts of Great Plains, with successive dry spells hitting in 1934, 1936 & 1939-1940. The multiyear drought of 1950s began in SW but eventually spread to cover 10 states before it ebbed in 1957. The current drought, in contrast, is just about 2 months old’

In addition, many other peer-‘reviewed studies and data refute the notion of unprecedented drought in California or elsewhere.

NPR: 3 new papers make the case that forest fires in the West today burn less than in historical times

Climatologist Dr. John Christy in testimony to Congress: ‘Extreme events, like the recent U.S. drought, will continue to occur, with or without human causation’ — ‘These recent U.S. ‘extremes’ were exceeded in previous decades’ — ‘The expression of ‘worse than we thought’ climate change as documented in [James] Hansen’s OpEd does not stand up to scrutiny’

Prof. Pielke Jr. on new Nature drought study: ‘It means that a widely accepted and oft-repeated consensus position expressed in IPCC 2007 now appears to have been incorrect’ — Pielke Jr.: ‘This should not be unexpected as a consensus position is a snapshot of perspectives, and in science, perspectives can change based on new evidence and study…This places drought into a category with tropical cyclones, floods, tornadoes & other phenomena where the evidence does not support claims that things are progressively getting worse — with more frequent and intense extreme events on climate time scales’

Prof. Pielke Jr. on new Nature drought study: ‘Once again the lesson is that if you are looking for a signal of human-caused climate change, it is best not to look at such extremes’ — Pielke Jr.:’There is very little evidence to support claims that the influence of such changes can be observed
in the observational record of extreme events. Advocates who justify action on climate change by appeals to the latest extreme event go well beyond what science can support, and in the process undercut the very cause that they are advocating for’

Nature paper: Global droughts unchanged in 60 years: ‘Worldwide drought is about the same now as it was in 1950′ — ‘Researchers finally accounting for fact that warmer world usually means more evaporation (especially from oceans) & thus more rain’ — ‘How many images have we seen of drought-stricken cracked land, or been told this is future?…Since end of WWII humans have produced 85% of all their CO2 emissions, but here is a new study showing that for all those emissions, & for all that warming, droughts back then were just as bad globally as they are today’

Prof. Roger Pielke Jr.: Over the climate time scales ‘droughts have, for the most part, become shorter, less frequent, and cover a smaller portion of the U. S. over the last century’ — ‘Some places have become dryer, others wetter, and not much confidence in asserting the presence of any trends at the global scale.’ — Pielke Jr. summarizing the bottom-line conclusions of two of the most recent major scientific assessments of extreme events and climate change, one by the US govt. released in 2008 then reaffirmed in the CCSP Unified Synthesis under the Obama Admin., and the 2nd from the UN IPCC.

Article in Nature says extreme weather events can’t currently be attributed to global warming — An editorial published in the current issue of nature notes that ‘Better models are needed before exceptional events can be reliably linked to global warming.’ — ‘One critic argued that, given the insufficient observational data and the coarse and mathematically far-from-perfect climate models used to generate attribution claims, they are unjustifiably speculative, basically unverifiable and better not made at all.’

1974: Flooding, Drought, Crop Loss And Mild Winters Blamed On Global Cooling: TIME Magazine June 1974: ‘Another Ice Age?’: ‘In Africa, drought continues for the sixth consecutive year, adding terribly to the toll of famine victims. During 1972 record rains in parts of the U.S.,
Pakistan and Japan caused some of the worst flooding in centuries. In Canada’s wheat belt, a particularly chilly and rainy spring has delayed planting and may well bring a disappointingly small harvest’

1976 CIA Shock News: Global Cooling To Kill Us All – ‘The CIA warned in 1976 that global cooling will increase the frequency of droughts’ 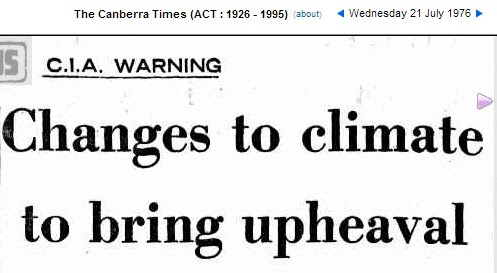 We have heard it all before! 1950 Shock News: ‘The world’s weather is just crazy’ — Strange Atmospheric Events Causing Floods, Droughts, Polar Melting, Global Warming
1975: Newsweek Explained How Global Cooling Causes Extreme Droughts, Floods, Dry Spells And Heatwaves -Global cooling ’causes an increase in extremes of local weather such as droughts, floods, extended dry spells, long freezes, delayed monsoons and even local temperature increases – all of which have a direct impact on food supplies’
Scientists reject notion that human-caused climate change led to war in Syria – ‘Human-influenced climate change impact on the drought conditions was almost certainly too small to have mattered’

2014 Study: ‘The humanitarian crisis of the late 2000s largely predated the drought period.Focusing on external factors like drought and climate change in the context of the Syrian uprising is counterproductive as it diverts attention from more fundamental political and economic motives behind the protests and shifts responsibility away from the Syrian government.

Study: Drought Of 1934 In North America, During The Dust Bowl, Was The Worst In Thousand Years – ‘The drought of 1934 in North America was the driest and the most widespread of the last millennium, according to a new study based on a reconstruction of North America’s history of drought over the last 1,000 years. – Study published in the Oct. 17 edition of Geophysical Research Letters by researchers from NASA and Lamont-Doherty Earth Observatory.

“It was the worst by a large margin, falling pretty far outside the normal range of variability that we see in the record,” Ben Cook, a climate scientist at NASA and the study’s lead author, said in a statement.