Georgia Public Schools are teaching key components of Islamic dawah: “schools are reportedly forcing students to learn the Five Pillars of Islam—the creed one must learn to convert—and teaching students that Allah is the same God worshipped by Christians.” So far, unlike in Tennessee, they haven’t [yet] forced the students to actually recite the Shahada, the Muslim confession of faith.

Further, homework assignments are designed to indoctrinate students into accepting this assertion as fact, when it is a strongly contested point which many traditional Christians flatly reject, and with compelling reason.  In addition, the volume of Georgia school materials on Islam outnumber those on Christianity by up to 10 to 1, further highlighting the preferential treatment accorded Islam “in a way that could violate the U.S. Constitution.”

The “Same God” assertion is indeed a primary plank of Islamic dawah (proselytizing), and together with Islam’s claim to be an “Abrahamic Faith” is one of the main tools used by Muslim apologists to advance their agenda within unsuspecting Christian and Jewish communities.

Besides the theological issues with the “Same God” claim itself, Mark Durie explains some of the many dangers this and the “Abrahamic Faith” assertion conceals:

This historical negationism—appearing to affirm Christianity and Judaism whilst in fact rejecting and supplanting them—is a lynchpin of Muslim apologetics.

What is being affirmed is in fact neither Christianity nor Judaism, but Jesus as a prophet of Islam, Abraham as a Muslim, Moses as a Muslim, etc. This is intended to lead to ‘reversion’ of Christians and Jews to Islam, which is what [Shamim A.] Siddiqi  [author of the Muslim proselytizing guide, ‘Methodology of Dawah‘, which explicitly teaches Muslim preachers to withhold from potential converts the full truth about Islam’s violent and supremacist aspects until after they have professed the faith] refers to when he speaks of “the joint responsibility” of Jews and Christians to establish “the Kingdom of God”. By this he is asserting that American Christians and Jews should embrace Islam and work together to establish Sharia law and the dominance of Islam in the United States.

The traditional Islamic view is that if you want to know what the God of the Bible is like, then read the Koran. Not only must Muslims believe that “we worship the same God”, but this message is always a central component of the presentation of Islam to Christians and Jews.

[This message] provides the lynchpin of Muslims’ efforts to convert the “People of the Book” to the faith of Muhammad. In addition, this belief, once accepted, can lead Christians to support Islamic perspectives in ways other than conversion. For example, embracing this Islamic doctrine wins a measure of respect and even support for Islam from Christians. 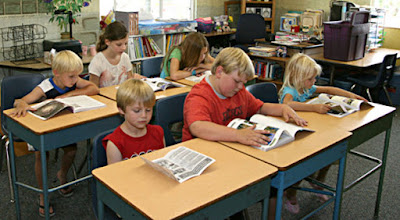 Islamic indoctrination in public school is occurring right here in our backyard. As we previously reported, the core tenets of Islam are being taught in public schools in a way that could violate the U.S. Constitution. Other religions, such as Christianity, are barely covered. Recently, reports out of Georgia paralleled what has happened in Florida, Wisconsin, and Tennessee.

Georgia schools are required by the Georgia Department of Education to teach about Islam. For example, the Georgia Performance Standards mandate that students be able to “Compare and contrast the prominent religions in Southwest Asia (Middle East): Judaism, Islam, and Christianity.” Much like other states, the Georgia Department of Education sets state-wide education standards and the local schools decide the curriculum. Local schools in Georgia, however, are reportedly adopting curriculums that appear aimed at indoctrinating—rather than educating—students.

The Atlanta Journal Constitution reported on one local middle school that is taking their curriculum too far. The AJC reports:

“It is important that students understand the differences between each of these religions to help them understand the tensions that exist in the region,” the state standards, known as the Georgia Performance Standards, say.

In Walton County, that manifested itself in a homework assignment one parent found objectionable: “Allah is the [blank] worshiped by Jews & Christians,” the document said. The child filled in the blank with “same God.”

This is outrageous. State education standards require education on Islam, not indoctrinationinto the religion. Rather than explain the history of world religions, schools are reportedly forcing students to learn the Five Pillars of Islam—the creed one must learn to convert—and teaching students that Allah is the same God worshipped by Christians.

Unfortunately, this practice has been happening in schools for years. A spokeswoman for Walton County Public Schools stated that:

“We are teaching the same stuff that everyone else is teaching,” she said, adding that the district hasn’t changed its curriculum on the topic in nine years. Her son, a senior in high school, told her he remembers doing a quiz along the lines of the Allah is the “same God” back when he was in seventh grade.

“The same stuff that everyone else is teaching…”  That could work as the epitaph on the tombstone of American Education, and epitomizes the sheer ignorance of many of those trusted with public education, and their complicity in the accelerating Islamization of generations of American students, not to mention the progressive crippling of the intellectual vibrancy of the United States.

Parents are understandably outraged. As one frustrated parent told the local news, “We are seeing one page, five statements of Christian faith and 5 or 10 pages of Islamic faith, so there is no accountability to make sure it is equal.”

Something needs to be done. We at the ACLJ are working hard to investigate, expose, and end these unconstitutional practices, and are committed to fighting for the constitutionally protected rights of all public school students. We continue to receive contact from concerned parents and citizens.  We are working directly with our clients—parents of students in local schools—and preparing to send out demand letters to these schools if necessary. Moreover, we recently sent open records requests to every school district in Tennessee to find out exactly what is being taught in our schools.

The ACLJ will not stop until our students’ constitutionally protected rights have been restored.

Australia: Jihad murderer got his gun at mosque