When the history is written of the successful effort to achieve Congressional term limits via an Article V convention, recall that it started right here.

At their Oct. 14 meeting, the Palm Beach County Republican Executive Committee made a resounding call for an Article V convention limited to the issue of Congressional term limits. The resolution was approved 79-1. 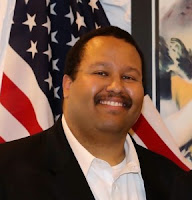 Chairman Michael Barnett (photo, right) presided over the vote. Two weeks earlier, the board approved the resolution for a floor vote by a vote of 12-0.

In taking this action, the Palm Beach County Republicans are speaking for the 83 percent of Republicans nationwide that told Gallup pollsters in 2013 that they want to see the terms of Congress limited by a Constitutional amendment.  Ironically, they are also standing up for the 65 percent of Democrats that share their view.

For Florida to make an official call — or ‘application’ — for an Article V convention, a bill to do so must pass each of Florida’s legislative chambers, both currently dominated by Republicans. The bill has just emerged from drafting and is starting its journey through the legislative maze. Hence, this resolution by one of Florida’s largest and most respected county RECs is both timely and powerful.

Here is the text of the resolution in its entirety:

WHEREAS, legislative term limits improve citizen access to office, broaden the range of experience in a political body, improve incentives faced by lawmakers, and mandate competitive elections at regular intervals;

WHEREAS, recent national polling (Gallup 2013) indicates 75% of voters of all parties continue to support term limits, including 83% of Republicans and 65% of Democrats;

WHEREAS, Florida voters imposed term limits on their Congressional delegation in 1992 with 77% of the vote, and more recent polling (Quinnipiac, 2009) shows that 82% of Floridians continue to support term limits on public officials;

WHEREAS, the Supreme Court of the United States (U.S. Term Limits v Thornton, 1995) declared that term limits could only be imposed by a constitutional amendment;

WHEREAS, the U.S. Congress has steadfastly refused to send a Congressional term limits amendment to the states for ratification in spite of broad popular support;

WHEREAS, Article V of the U.S. Constitution provides an alternate means of proposing constitutional amendments via a convention of the states that does not require a Congressional vote;

WHEREAS, upon receiving official calls from two-thirds of the states, Congress must call a convention for the purpose of proposing amendments;

THE REPUBLICAN PARTY OF PALM BEACH COUNTY HEREBY RESOLVES that the Florida legislature make an official Article V call to convene an amendment convention for the specific purpose of limiting the terms of the U.S. Congress.

This resolution will be even more effective if amplified by the resolutions of other RECs across the state. If you are a member of a local REC, please take this resolution to your board and ask for a vote.