This is a post about a fourth-grade assignment for a Louisiana student, and given that Louisiana is under Common Core for 2015-16, it is logical to conclude that the assignment below is McGraw Hill’s effort at a Common Core math assignment for fourth grade. (I write “effort” since the worksheet appears to try to offer traditional math and satisfy Common Core at the same time.)

The assignment is about carrying in subtraction. However, the explanation of how carrying works when one cannot borrow from the next column and must “borrow in order to borrow” is a lesson in frustration.

Note that at the top of the worksheet page (posted below), McGraw Hill offers help via ConnectED, a login service offered by by McGraw Hill for its math products.

Interestingly, in July 2015, McGraw Hill decided to sell its summative (“high stakes”) testing division to Data Recognition Corp (DRC) and concentrate on classroom materials– like the math worksheet and online help featured in this post:

McGraw-Hill officials say leaving the summative and shelf testing markets will allow them to focus on products and services that more directly serve teachers and students in the classroom.

David Levin, McGraw-Hill Education’s president and CEO, said in an interview that the company’s major emphasis will be on “instructional materials, and the tools and software to make the most” of resources for students and teachers.

If we go back in time, to 2004, McGraw Hill intended to become “the leader in assessment reporting” as it acquired Common Core “architect” David Coleman’s assessment company, Grow Network, and kept Coleman on as CEO until 2007.

Let us now turn our attention to an example of the McGraw Hill math product: that fourth-grade worksheet in subtraction by carrying.

In characteristic Common Core math fashion, the explanation on the worksheet is confusing; it lacks detailed directions/illustration and therefore appears to require many parents to log in online for “homework help” (click on image to enlarge): 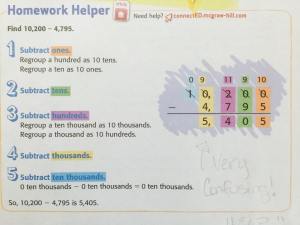 (The above reads like some effort to cross Common Core and traditional math. Here are the Common Core math standards for grade 4, “Number and Operations in Base Ten,” for those who wish to view and compare to McGraw Hill’s worksheet.)

But let us now leave McGraw Hill, for the explanation of the same concept, for example, on dummies.comunder “How to Borrow when Subtracting” is much clearer:

In some cases, the column directly to the left may not have anything to lend. Suppose, for instance, you want to subtract 1,002 – 398. Beginning in the ones column, you find that you need to subtract 2 – 8. Because 2 is smaller than 8, you need to borrow from the next column to the left. But the digit in the tens column is a 0, so you can’t borrow from there because the cupboard is bare, so to speak:

When borrowing from the next column isn’t an option, you need to borrow from the nearest non-zero column to the left.

In this example, the column you need to borrow from is the thousands column. First, cross out the 1 and replace it with a 0. Then place a 1 in front of the 0 in the hundreds column:

In the spirit of promoting practical solutions necessary for efficiently navigating life, perhaps Louisiana school districts should ditch the expense of McGraw Hill and its Common Core confusion and invest in straightforward explanations.