In response to the latest string of terrorist attacks in Egypt, Paris and Mali, President Obama has vowed to “never, ever, ever” discuss terrorism anymore, stating that “if we acknowledge terrorism exists, then the terrorists will have won.”

Speaking from the White House Press Room, the President gave an example of the Eagles of Death Metal, an American rock band whose concert in Paris became a scene of a bloody terrorist attack earlier this month. “Those folks should have kept playing,” he said. “When they stopped playing and ran for their lives, the terrorists won. I am encouraging all citizens: if you see anything suspicious, just ignore it and keep doing what you’re doing, or the terrorists will have won.”

Taking his point further, President Obama presented his new plan to combat terrorism. “What we are determined to do is to create a safe space – right here in the White House Press Room – where we are free from the tyranny of offensive ideas, facts, and actions. So from now on, no more questions about politics, ISIS, or Donald Trump. None of that stuff. We can talk about basketball, nutrition, or beer. I’ve got some some new jokes too, if you want to hear them.”

An awkward silence that followed was interrupted by a question from the back of the room about intelligence reports concerning the Mali bombings.

President Obama responded to it by placing his index fingers in his ears and humming loudly, saying he couldn’t hear anything due to the loud noise he was making. He then stopped abruptly and invited everyone in the room to try it and see how easy it is not to hear anything.

The President then ended the press conference by saying that there was a group of random protesters outside the White House and he couldn’t wait to usher them in and meet their demands. 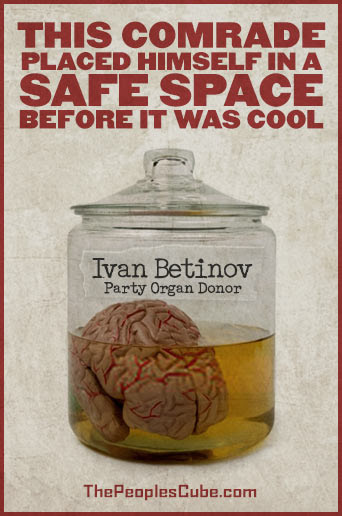 From the start Obama was credited by the media with bringing a touch of academic refinement to the White House. They didn’t mention that the biggest achievement of academia in recent years was the creation of “safe spaces” for students. In terms of foreign policy, that translates into creating and protecting a “safe space” between the President’s ears.

Thus, life imitates the People’s Cube once again, because way back when Obama was still a nobody, we already had an academic comrade who had placed himself in a safe space. Ivan Betinov did it before it was cool!