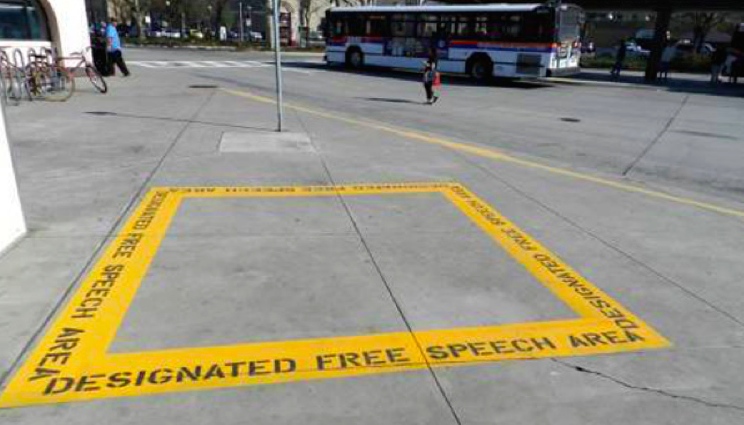 It could occur to one that the difference between “safe spaces” in today’s U.S. and yesterday’s U.S.S.R., other than the name, is the size. Here they’re tiny areas on some college campuses.

In the Soviet Union they were every place apart from the tiny areas called gulags.

One could also ponder how, while the Soviets were somewhat less euphemistic than their American progeny, it’s no stretch to say their insane asylum outside the gulags was also a “safe space.” To exist, any lie-based ideology needs a sheltered area — even if it’s only inside a person’s own cranium — that is safe…from Truth.

Alarm at the Safe Spacers’ space-between-the-ears ideology is wholly justified. In recent times we’ve heard statements such as “What really bothered me is, the whole idea is that at a liberal arts college, we need to be hearing a diversity of opinion. I don’t think we should be tolerating conservative views because that dominant culture embeds these deep inequalities in our society.” That was one Erin Ching, a Swarthmore College student reacting to a campus debate last year between leftist Princeton professor Cornel West and renowned conservative Princeton professor Robert George. Then there’s this: “If our university community opposes racism, sexism, and heterosexism, why should we put up with research that counters our goals simply in the name of ‘academic freedom’?” …When an academic community observes research promoting or justifying oppression, it should ensure that this research does not continue.” That was Harvard Crimson editorialist Sandra Korn writing in 2014.

The cry “Academic freedom!” has so often been the last modern refuge of a scoundrel. If you want to justify a professor’s advocacy of some loony left-wing idea wholly destructive to society, shout it and fetid faculty and sullied students will circle the wagons. Yet the notion passes nary a liberal’s lips when the matter is the persecution of a conservative academic. Ask Cal State University Northridge English professor Robert Oscar Lopez, a wonderful man with whom I’ve corresponded, about that. The Safe Spacers have pinned a bull’s-eye on him because he dares question the homosexual agenda.

Thus, one of the only differences between the Safe Spacers and the liberal establishment (LIBe) they’re now tormenting — examples of members of the latter being the University of Missouri president and chancellor forced to resign in a purge — is that the former may be a tad more honest. They don’t pay lip service to academic freedom.

And the defense of the LIBe’ers consumed by the demon they themselves spawned is often mounted by conservatives, well-meaning football-kickers they so often are. Commentator Jonah Goldberg, for instance, a wonderful writer and intrepid culture warrior, penned an op-ed last year in which he took Ching and Korn to task while defending academic freedom. Titled “Attacking Diversity of Thought,” it expresses common conservative laments. Yet pondering this struggle between the attackers and defenders of academic freedom brings to mind a G.K. Chesterton observation: “I believe what really happens in history is this: the old man is always wrong; and the young people are always wrong about what is wrong with him. The practical form it takes is this: that, while the old man may stand by some stupid custom, the young man always attacks it with some theory that turns out to be equally stupid.”

In reality, in defending “academic freedom” conservatives are doing what they always, quite unwittingly, do:  defend yesterday’s liberals’ successful social-revolution-born norms from attacks by today’s liberal social revolutionaries. They are again being the caboose to the leftist engine of change.

As to this, the aforementioned Korn, in a broken-clock moment of philosophical rectitude, did utter a truth when defending her position in saying, “After all, no one ever has ‘full freedom’ in research and publication. Which research proposals receive funding and what papers are accepted for publication are always contingent on political priorities.”

For many this is an uncomfortable fact, but the reality is that everyone draws lines. Would we want a professor teaching that pedophilia can be beneficial (as Alfred Kinsey and his colleagues did), that encouraging bestiality was positive because it would help reduce the birth rate, or that Hitler’s extermination camps were a good thing? Or how about an academic who aggressively advocates Nazism or Marxism in the classroom? Note that pushing the latter could cost you your job in the 1950s.

Some will now say “We don’t want McCarthyism in the schoolhouse!” This is a knee-jerk reaction. Every civilization has its version of “McCarthyism”; it’s just a matter of whether it’s the right or wrong kind. Socrates was forced to drink the hemlock partially for, the allegations went, corrupting the young via his teaching and for “mocking the gods.” During the Second Sophistic period in Rome, Latin rhetorical studies were banned in favor of Greek rhetorical studies. Miron Wolffson, a professor at Moscow University, was expelled from the institution in 1932 for teaching Menshevik ideas. Mathematician William Whiston lost his professorship at the University of Cambridge for taking anti-Trinitarian positions. And some nations, such as Colombia, banned the teaching of utilitarian philosophy in universities in the 19th century.

Some will now counter that this is contrary to the American ideal. But is it? If you dared espouse the kind of libertinism routine today in early America or violated obscenity laws — in school or elsewhere —  you could be “warned out of town” or worse. To be human is to have standards, and to have standards is to exclude.

Of course, they could be the double ones or the wrong ones. And there is only one way of avoiding this: having standards oriented toward Truth.

Oh, I know, this is where moderns wax relativistic and, echoing Pontius Pilate, ask “What is Truth?” After all, today only a minority of Americans even believe in it. But there’s only one alternative to standards oriented toward Truth: standards oriented toward a lie. And we’ll never formulate the proper standards if we distract ourselves from that sacred task with talk of “academic freedom.” As Chesterton also wrote, in his 1905 book Heretics, “We are fond of talking about ‘liberty’; but the way we end up actually talking of it is an attempt to avoid discussing what is ‘good.’ …The modern man says, ‘Let us leave all these arbitrary standards and embrace unadulterated liberty.’ This is, logically rendered, ‘Let us not decide what is good, but let it be considered good not to decide it.’”

For sure. People yearn for simple formulas for understanding others and arranging and governing society. Leaning on mythical academic freedom is easy; embracing some standard merely because it’s popular or feels right (as the Left does) is easy. Far more difficult, but necessary for civilizational health, is figuring out what Truth is and adhering to the limits it places on us.

Lines must be drawn by someone, in academia and everywhere else. And there are only two ways of governing: by eternal principles or ephemeral personal preferences. The Mizzou crew and their proximal targets — the yesterday liberals in power today — give us the latter. And we’re not going to defeat a Machiavellian lie with a well-meaning misconception.