No one could ever forget the horrendous images on television news in August of 2014 when ISIS cornered and entire Iraqi tribe on a mountaintop called Mount Sinjar.  This forgotten people are called the Yazidis.

Over 5,000 men, women and children were slaughtered by the terrorists of the Islamic State (ISIS)!  Since it was such a remote place in northwest Kurdistan, food, blankets and water had to be dropped by plane as Kurdistan forces finally reached them to save the majority of this people group. Kurds are mostly Sunni, but they are ethnically distinct from Iraqi Arabs.  They control most of northern Iraq, to include most of the important oil fields in the northeast.  They possess a unique piece of the puzzle in the conflict between the Iraqi government and ISIS.  The Yazidis, living in northwestern Kurdistan, are even more “removed” because they are simply a “forgotten” people.  Few visit them as they are dangerously close to ISIS strongholds.

The Kurdish militia (“The Peshmerga,” among others) number between 80,000 and 240,000 and does not “answer” to Baghdad.  But they are highly-trained and represent a very real threat to ISIS.

Like many others, my heart and prayers immediately went out to these dear people.  I vowed right then to visit them!  Far from the headlines in the news now, there is still an active genocide happening in Northern Iraq and Syria of Yazidis and Christians.  ISIS calls the Yazidis “apostate” Muslims, since they do not share the ISIS belief in the Caliphate.

The United Nations and some non-government organizations are trying to assist them, but most are running out of money quickly.  However, no amount of money, although desperately needed, will put a final halt to this genocide.

So the Yazidis join the long list of IDPs (Internationally Displaced Persons).  They suffered much and have supernaturally “maintained” since.  Then last month, the Peshmerga forces from Kurdistan began a concentrated operation to free Sinjar from ISIS and their 300 warriors left in the desolated town.  Coalition warplanes provided air support.

American news pundits claimed that battle would take many weeks.  However, within two days, Kurdistan President Barzani held a news conference in the town of Sinjar, claiming total victory. 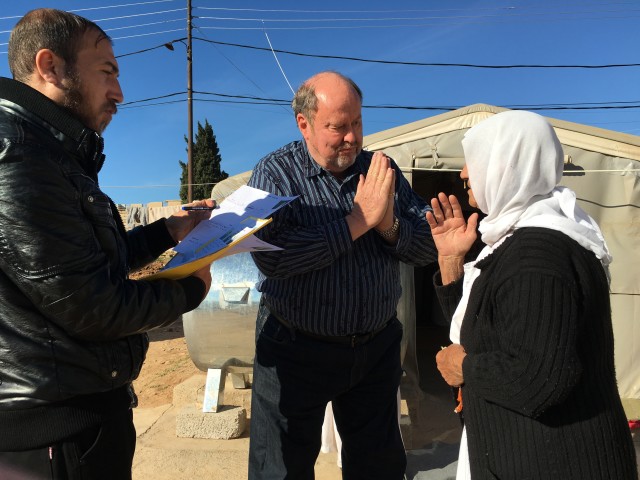 Praying with Yazidi widow, whose husband was killed by the Islamic State.

By faith, I scheduled a trip to Mount Sinjar this past July.  I was ready to spend Christmas with these forgotten people, no matter what.

After arriving and venturing within a couple of hours of Sinjar, my host and mercenary military person advised me to wait a couple of weeks because the victory was not 100% yet (“some mortars were still being fired on the road by ISIS”) and all the IEDs left by retreating ISIS was not yet all cleared.  In spite of my mission to touch their lives, I saw the seriousness in this military man’s face.  And he knew what he was talking about!

Immediately following the Paris terror attack which took the lives of 130 souls, French planes began to bomb ISIS positions, even more fervently than the United States bombing raids.  I’ll never forget my discussion with religious leaders in Lebanon last December when they said to me, “We cannot trust the United States government.  You are now bombing ISIS, when two to three years ago, you were arming what is now ISIS (under the umbrella of rebel groups against the President of Syria).”

According to the United Nations High Commissioner on Refugees (UNHCR), 19,000 Syrians have been picked straight from refugee camps in Turkey, Lebanon and Jordan and given U.N. approval for resettlement in the United States.  However, most Christians are NOT in the United Nations refugee camps because of assaults and rapes by Muslims.  Just about all of the 19,000 Syrian refugees are Sunni Muslims with an extreme hatred for free Western governments.

Over the past five years of war in Syria, the United States has admitted a grand total of about 120 Syrian Christian refugee families and just one Yazidi.  How can this be? Tears of gratitude from a Yazidi girl rescued from the Islamic State.

Billions of dollars are being given to bonafide terrorists by the United States in Iran as part of the supposed “Iran Nuclear Deal” in spite of Iranians (and their leaders) gathering and chanting:  “Death to America!”

Yet again people ask:  How can this be?

Clear-thinking Americans realize there will be attacks on the American soil.  In a Washington Post-ABC News survey published just BEFORE the San Bernardino, California terror attacks, 83 percent of registered voters believe a terrorist attack in the United States resulting in large casualties is likely in the near future.  Forty percent say a major attack is “very likely.”

Let the news speak the truth of this survey!

A purposefully unnamed American official in Kurdistan pronounced to me:  “Christianity is finished in Iraq!”

But, I beg to differ.  Many “Home churches” that I personally witnessed are springing up across Kurdistan.  Christianity is not finished!

But, as Christians, what can we do? We must continue to pray and do as much as we possibly can.  That’s why I took food and the Gospel to the Kurds and to the Yazidis this Christmas season.

In the Khanki United Nations’ Camp where many Yazidis are literally “warehoused” just outside Duhok, Kurdistan, I visited and prayed with over three dozen women and widows who have literally been rescued from ISIS.  The posted United Nations admission is they give only $19 (USA) to each person for food per month.  In reality, according to Christians who visit the U.N. camps on a regular basis, the food they distribute is “Grade 4” food, suitable as animal or dog food.  So in addition to prayer and encouragement (and a promise to return), I left each one with approx. $40 for food.

The stories of atrocities are too painful to retell, (or show in pictures) even from someone who has heard similar stories from various war zones in years past.  ISIS is the most ruthless, demonic murdering group ever.

I heard, firsthand, horrific stories from a rescued ten-year-old who had been repeatedly raped by ISIS.  Some ladies were paid for at ISIS slave auctions by undercover rescuers.  Some girls and widows managed to risk all and somehow escaped, traveling days and nights to “freedom.” Most did not know whether or not their husbands were dead or alive.  Unfortunately, the majority will learn a terrible inevitable.

In spite of losing all and suffering more than anyone, all smiled with tears of gratitude for me reaching out to them with the compassion of Jesus Christ.  Making a small difference: one desperate life at a time.

Christmas, this year; I will never, ever be the same!

EDITORS NOTE: The featured image is of the author with a young Yazidi girl who was captured by the Islamic State. She was bought at an Islamic State slave auction by a group of undercover rescuers.