Another setback for the Obama Ministry of Islamophilia, which recently was stunned by the Army ignoring the recommendations of its investigating officer and deciding that Bowe Bergdahl will face a general court martial for desertion and “misbehavior before the enemy”.

The deserter Bergdahl, you will recall, was declared by the Obama administration to have “served the United States with honor and distinction.” But there was something greater at play in the Bergdhal case, something great enough to inspire President Obama to hold a special ceremony in the Rose Garden. Mark Steyn asks some hard questions about one of the strangest, darkest episodes of the Obama presidency:

The deserter may get his just deserts, but what of the man who made the “deal” for him and then honored the deserter with a Rose Garden photo-op with his Taliban-supporting dad… The President of the United States embracing a Taliban sympathizer at the White House. There was no need to hold such an intimate photo-op. Yet Obama chose to do it. Why?

Given what the United States Government knew about Bergdahl at the time of that ceremony, ignorance of who he was is not a plausible explanation. So my question a year and a half ago remains unanswered: why did he do it? […]

There are three dishonorable men in that short photo-op: a deserter who broke his oath, a father who sympathizes publicly with the enemy …and a president lying before the nation, to make them complicit in that dishonor…

The Army at least has decided it will not be made complicit in that dishonor. If there were a real press in this country, someone would ask Obama how it is that he became the first president to host a Rose Garden celebration for a deserter.

Now the Navy also seems to be waking up after seven years of Obamasleep. This is an especially stunning reversal, as just a month ago, FBI Director James Comey had indicated details on the Chattanooga investigation might never be kept secret, stating,  “We don’t want to smear people.”

Abdulazeez’s motivations aren’t really in doubt. He viewed material by jihad leader Anwar Awlaki online, and spoke about Islamic martyrdom. He wrote in his diary about “becoming a martyr.” He texted a hadith to a friend before he began his attack. Abulazeez’s motive is only unclear to the terminally blinkered and willfully ignorant.

And Comey does know more than he is telling: “Sometimes the way we investigate requires us to keep information secret.” Fair enough, but then he adds this curious statement: “That’s a good thing. We don’t want to smear people.” How could he possibly smear anyone by releasing information about Abdulazeez’s motivations? Is there a jihadi mastermind behind this attack, still loose in Chattanooga? Or does Comey mean that he doesn’t want to talk about Abdulazeez’s motivations because to do so would smear Islam, i.e., cast it in a bad light?

Now the Navy is awarding five Purple Hearts, and the Chattanooga jihad murders are admitted to be, in Comey’s most recent statement, “inspired and motivated by foreign terrorist propaganda.”

Signs of hope? Perhaps, but dhimmitude is always just one jizya payment — or Rose Garden photo op — away. 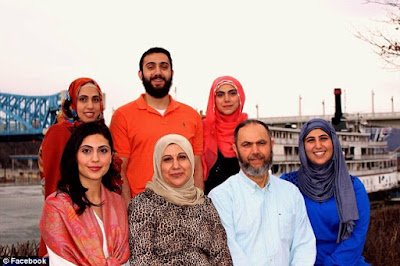 NASHVILLE, Tenn. (AP) — After determining a shooting at a Chattanooga reserve center this summer was inspired by foreign terrorists, the Navy will award the Purple Heart to the four Marines and one sailor who were killed and the one Marine who was injured there.

U.S. Navy Secretary Ray Mabus announced the decision Wednesday in a news release. He said the finding that the shooting was terrorist-inspired came after an extensive investigation by the FBI and Naval Criminal Investigation Service.

“This determination allows the Department of the Navy to move forward immediately with the award of the Purple Heart to the families of the five heroes who were victims of this terrorist attack, as well as to the surviving hero, Sgt. Cheeley,” Mabus’ statement reads.

The FBI earlier labeled shooter Muhammad Abdulazeez, a naturalized U.S. citizen, a homegrown violent extremist but declined to say what might have motivated him. His family said he had problems with drugs and depression that prevented him from holding on to a job. He was also in debt, and considering bankruptcy at 24.

But investigators also found writings from Abdulazeez that reference Anwar al-Awlaki, a U.S.-born cleric who encouraged and inspired attacks on the homeland and was killed in a U.S. drone strike in 2011.

That statement came after some had questioned why the Dec. 2 attack that killed 14 in San Bernardino, California, was quickly labeled terrorism but months passed without a determination in the Chattanooga attack.

Abdulazeez first fired shots from his car into a military recruiting center in a Chattanooga strip mall before driving about 7 miles to a Navy-Marine reserve center where he killed four Marines and a sailor and wounded a fifth Marine before Chattanooga police killed him.

U.S. Sen. Bob Corker (R-TN), who is from Chattanooga, praised the decision in a statement, saying those killed and wounded “exemplify the very best that America has to offer.”

“Our commander-in-chief has classified the heartbreaking events that took place that day as an act of terror, and I have been pressing the FBI to provide answers to both the families of the fallen and our community,” said the Tennessee Republican. “I appreciate the efforts of all involved as they work tirelessly to piece together this puzzle so we can better protect ourselves in the future.”

Smith’s grandmother, Linda Wallace, said in a telephone interview that she was frustrated it took months to determine the shooting was inspired by foreign terrorists. But she was pleased to hear of the award.

“He definitely deserved it,” she said. “He gave his life for those other guys.”