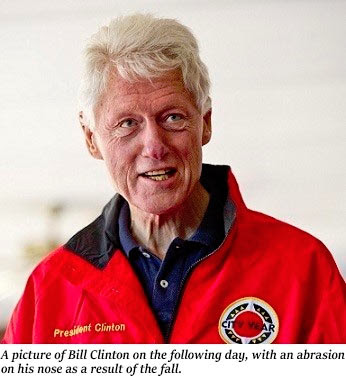 According to a dozen witnesses, shortly after his arrival at the event center, Bill Clinton started talking to Nicole Reynolds, a 22 year old MSNBC makeup intern.

“There wasn’t anything malicious at first,” said Brian Hazely, a custodian at the event center. “We couldn’t hear what they were saying, but as time went on you could see she got more and more uncomfortable and even tried to walk away from him. But he kept following her everywhere she went; she just couldn’t get away from him.”

“No one knew what to do,” Alex Knight, an audio technician, told a reporter. “We were specifically instructed not to engage or even speak to any member of Clinton’s staff, let alone Bill Clinton. There was nothing we could do. It was a very uncomfortable scene for everyone to watch. At the same time we could hear Hillary talking about women’s rights over the speakers, which I thought was ironic.”

Another witness, Rebecca Johnson, saw the aging former President finally corner the young intern by the refreshment stand. “At that point he became more aggressive. I saw him pull a cigar out of his coat pocket and show it to Nicole Reynolds. She panicked and it seemed she was about to start screaming. That’s when Hillary’s campaign manager ran over and put his hand over Nicole’s mouth, so the people out at the event wouldn’t hear her shrieking.”

“At that moment Bill Clinton grabbed her skirt, but she bit Hillary’s campaign manager’s hand and darted out from that corner,” Johnson continued. “The skirt ripped at the seams and Bill Clinton fell down on the floor, holding the torn piece of clothing in his hands. That’s when his security team rushed over with EMS personnel, worried about what a fall like that could do to a man of his advanced age. But as it turned out, he only scraped his hand and had a small abrasion on his nose, plus a bruise on his elbow from what I could gather.”

According to witnesses, members of Clinton’s traveling staff immediately covered Nicole Reynolds in a blanket and took her to a more private area, as if following a rehearsed damage control procedure. No one claimed to have seen the intern after that. One witness overheard a high-ranking Clinton staffer mentioning “hush money.” In the meantime, Bill Clinton was escorted to a VIP lounge, where he remained for the remainder of the event.

As of yet no comment has been made about the incident by either Hillary Clinton or any of her staff.

EDITORS NOTE: This political satire originally appeared on The Peoples Cube. The below graphic was posted on our Facebook page: Obamacare Is Bondage and Bureaucracy