CNN host Fareed Zakaria is now calling to censor social media because he was offended by The People’s Cube satire about his writings. Without mentioning that our satire was a hyperbolic buildup on his own recent writings, Zakaria cries for government protection of his hurt feelings, making it clear that he can dish it out but can’t take it. Taste your own medicine, Fareed.

“Progressives” have trolled, ridiculed, satirized, maligned, insulted, bullied, and lied about conservatives since the inception of the Internet. But once they see the signs of oncoming traffic, they cry and run to mommy – or to the nanny state in this case – asking to make it a one-way street once again, where only they can ride their tricycles, wear funny hats, and fling poop at those whom they consider inferiors. Watch Fareed Zakaria on camera wiping his face from the poop flung at him.

Fareed’s Take: I was the target of Internet trolling

An open letter to Fareed Zakaria from The People’s Cube:

There have been studies showing that a foreign-born author’s unique perspective can help the natives to boost their own creative thinking through the so-called “schema violation,” which occurs when our world is turned upside-down. You may argue that your “otherness” benefits and enlightens this country, with an implication that those unwilling to be enlightened by you are bigots who resent your “otherness” and won’t have their old schema to be violated by a newcomer.

Like you, I am a foreign-born author whose English is a second, or, rather, a third language; I know what it feels to be “the other.” I also like to help the natives to boost their creative thinking by turning their reality upside-down and sending their temporal and spatial cues off-kilter (my website,The People’s Cube, is one such big schema violation). I don’t resent anyone’s “otherness” as long as they don’t attempt to make me comply to theirs. In sum, I am not concerned with your ethnic or cultural “otherness.” It is your ideological “otherness” that bothers me, which makes you indistinguishable from the next run-of-the-mill, native-born “progressive.”

Now that we got the implication of bigotry out of the way, let’s get down to business.

On January 2, one of our contributors posted a satirical response to your Washington Post articlewhere you apparently gloated over the premature deaths of white males in America. Our author took your argument to its logical conclusion, adding the need to exterminate white females as well – through Jihad, rape, and sex slavery as recently seen in Europe and elsewhere. This parody wasn’t meant to be taken as factual reporting, given the context of our website and especially considering the author’s credentials at the top: Chedoh, Kommissar of Viral Infections, Hero of Change, Prophet of the Future Truth.

On January 14, you responded to our satire in your Washington Post article titled, Bile, venom and lies: How I was trolled on the Internet, and today you started your show on CNN with a segment titled, Fareed’s Take: I was the target of Internet trolling, in which you were mostly reading your earlier article from the teleprompter. Among other things you claimed that our story “was cleverly written to provide conspiracy theorists with enough ammunition to ignore evidence” and complained that some people took our “reporting” seriously and reposted it in social media with impolite comments, all of which led you to conclude that someone must create a mechanism in social media “to distinguish between fact and falsehood.” And since that someone can only be the government, your statement can only be understood as a vague call for the government censorship of the Internet.

However, neither your article, nor the CNN segment mentioned that our grotesque fiction was based on your own controversial ideas that many Americans found insulting and grotesque. Why? Was it because such an admission would have undermined your argument that people were angry at you over nothing?

And why in the world, Fareed, did you decide to bring up the term “radicalization,” which in today’s world is mostly associated with Islam? Do you have such a tin ear – or do you really think that if you broaden the definition and talk about “American radicalization,” people will begin to see the two as morally equivalent? Do you think they are morally equivalent, Fareed?

For you, sitting on the top floors of your well-protected media establishment’s ivory tower, it’s easy to downplay the threat of Islamic radicalization and throw the “Islamophobia” labels at all those little people down at the street level. The only radicalization to which your skewed radar is attuned is the faintest sound of protest from the little people, when they get fed up with your condescending elitism and begin to rebel against the “progressive” establishment. That’s what scares you the most, doesn’t it, Fareed? That’s when you mouth off your grave concerns on CNN and write in WaPo about the threat of radicalization.

But who is at fault that Americans no longer trust the establishment and its media? Have you considered the possibility that none of this would be happening if you and your colleagues weren’t so radical yourselves, feeding the people with half-truths, distortions, propaganda, and outright lies, placing your Utopian “progressive” ideology above facts, smug and secure in your impenetrable media castle? Did it occur to you that you and your media establishment may be the very reason why so many people suddenly like Donald Trump, whom you so despise, and nothing you say on the subject can change their minds because no one trusts you anymore?

When you talked about a study where “simply by talking to one another, the bigoted students had become more bigoted,” has it even occurred to you how perfectly this describes your “progressive” echo chamber, where tolerance towards opposing philosophical viewpoints is nonexistent? If you think that calling those who disagree with you “bigots” makes you an anti-bigot, let me share a little secret. There are two kinds of bigots today: the bigots and the anti-bigots, and it’s hard to say which kind is worse.

A good example of “group polarization” involving radical “anti-bigots” is JournoList – a highly biased group of about 400 left-wing journalists and political activists who for three years (2007-2010) participated in a private online echo chamber where they, in violation of public trust and professional ethics, conspired to coordinate media attacks on conservatives, to promote certain issues while burying others, and to influence the 2008 elections in favor of Barack Obama. To paraphrase Kolbert’s study, “Simply by talking to one another, the radical left-wing journalists had become more radical left-wing journalists.” To use your exact quote, “It is how radicalization happens and extremism spreads.” Say, were you just as worried about “group polarization” then as you are now?

Isn’t it a little too late to complain about America’s radicalization, Fareed? Where were you during the George W. Bush years, when your fellow “progressives” trolled, ridiculed, and slandered the U.S. President and his supporters, with full support of the mainstream media? When there no longer was any distinction between a drug-fueled street protester and a media commentator?

Did you complain when “progressive” satirists collectively created a false, hyperbolic reality around Bush, conservatives, Fox News, and America in general, which was then regularly disseminated as the truth around the world, translated into many languages, and contributing to the anti-American sentiment? Some of my own family members in Russia and Ukraine still honestly believe that those “facts” really happened. As you so eloquently stated,” the people spreading this story were not interested in the facts; they were interested in feeding prejudice.” Did you complain then, or did it feel too good to let go?

You refer to a scientific study of Facebook users, which found that “people mainly shared information that confirmed their prejudices, paying little attention to facts and veracity.” That sounds reasonable. For example, even without a scientific study I know that an overwhelming majority of your fellow “progressives” believe that Sarah Palin has actually said “I can see Russia from my house,” paying little attention to the fact that it originated as an SNL skit. Did you complain about that in 2008? Were you at all concerned that Tina Fey’s “Palin” videos might confuse voters and skew the election? Probably not; it was just satirical hyperbole, right?

What if social media encourage misinformation, rumors, and lies, you ask. But did you ask the same question when misinformation, rumors, and lies were coming not from social media but from a seasoned mainstream journalist named Dan Rather – or, more recently, The Rolling Stone Magazine? Or, worse yet, from the nation’s political leaders whom you support and admire? Wasn’t the entire debate on and implementation of ObamaCare based on misinformation and lies? Were you alarmed when Joe Biden told a black audience that the Republicans would put them back in chains?

Did you speak against radicalization when the “hands up don’t shoot” movement, based on misinformation, rumors, and lies, and encouraged by the mainstream media, resulted in looting and the destruction of property, followed by the murders of innocent police officers?

The answer to all those question is “no.” You have never violated the “progressive” schema, Fareed. You’ve been a loyal Party soldier, albeit a mediocre creative thinker, having traded your “otherness” for conformity and sacrificing your unique perspective to what you thought was “progress.”

Examples are plenty; more can be provided upon request. Now let’s talk about victimhood.

You say you are the victim because you have received some hateful messages and comments. I have also received many hateful messages and comments from your fellow “progressives” over the years. Now what? You claim you have received a late-night phone call that woke up and threatened your young daughters. Indeed, Fareed, making threatening calls is a crime. Did you file a police report? Did the police trace the number and find the perpetrators, who are hardly a sophisticated organization behind an impenetrable firewall? If not, I can’t believe every claim that comes from a confirmed plagiarist. You may as well claim that someone kicked your three-legged puppy and it made you cry.

While you played the world’s saddest song on the world’s smallest violin, I was the one who took the real hit. Snopes.com, a “fact-checking” website rooting for the “progressive” team, has not onlydebunked our satire as they’ve done it many times in the past – this time they also made an unsourced and slanderous allegation that our site is “known for spreading malware.”

Next, some busybody contacted one of our advertising providers, Content.ad, which then declined to pay our advertising earnings due to “serious quality issues.” The money we lost as a result may be small change compared to your CNN contract, but if you were penalized for your writings in the same proportional amount, I’m sure your righteous indignation would go well beyond just one article in WaPo and a five-minute segment on CNN.

There is only one victim of lies, prejudice, and institutionalized bias here – and it ain’t you, Fareed. But don’t let this stop you from playing your upside-down game of “victims and radicals” while you still can.

So you think your opponents are radicals? Here’s a news tip: down here in the streets below you, it’s the other way around: growing numbers of Americans see you and your media colleagues as radical ideological hacks. You can call them any name you want, adding ultra-, far-, uber-, and other hyphenated insults; that won’t change the fact that their thinking is the norm and yours is not. Like all normal people on this planet, they don’t respond well to insults. But they are also the ones who make sure you have the freedom to call them radicals. 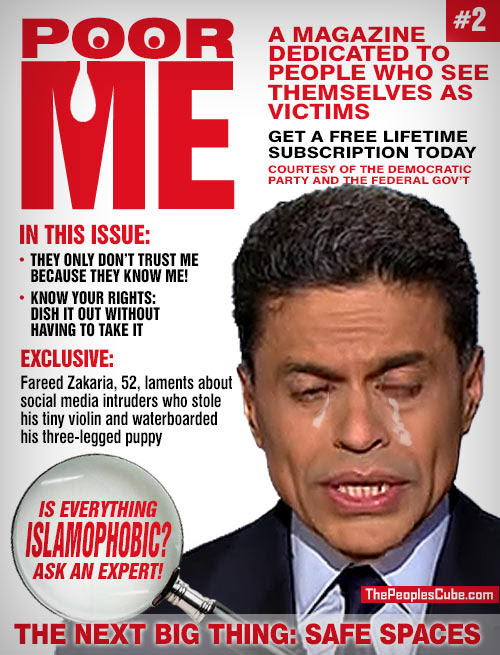