Today, Less than 2% of Trips Use Public Mass Transit.

Ronald Reagan once quipped that “government’s view of the economy could be summed up in a few short phrases: If it moves, tax it. If it keeps moving, regulate it. And if it stops moving, subsidize it.”

There, in a nutshell, you have a short history of mass transit in America. CEI’s Marc Scribner explains,

Over the span of a decade, the mostly-private mass transit industry was replaced by government transit monopolies.

As a result, for the last several decades, government at all levels has spent trillions on mass transit, subsidizing fares, expanding lines, and building vast new rail systems. Today, transit consumes more than 25 percent of all surface transportation funds (which mostly come from non-transit users through gas taxes).

What was the result of this tidal wave of taxpayer cash?

Despite receiving more than one-fourth of the funding, mass transit still represents less than 2 percent of trips taken nationwide. Even when one looks only at commuting, where trains and buses do best, mass transit’s national mode share is less than 5 percent — down from more than 6 percent in 1980.

But government transit monopolies keep lobbying for more and more funding. They claim the real problem is that public transit systems haven’t been expanded enough to draw more people into using them. Scribner calls this theField of Dreams theory: “If you build it, they will come.” 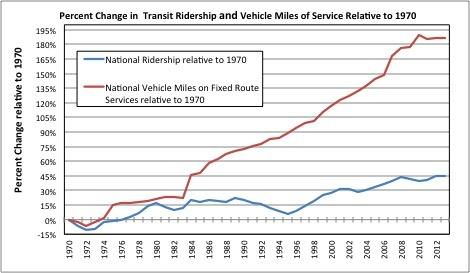 The problem with this theory is that it’s bogus. Research from Steven Polzin shows that the capacity of transit networks, including buses, streetcars, and trains, has nearly tripled since 1970, while absolute ridership has grown by just a fraction of that. Transit trips per capita have been dead flat since the 1970s.

Polzin writes, “Supply has grown far more rapidly than demand for the past several decades. This is a report card on productivity that mom and dad would hardly be proud of.”

Meaning: we built it; they didn’t come.

The trillions spent on mass transit have given governments many more empty buses and trains, but very little in terms of additional ridership. …

Mass transit can serve a very important, albeit narrow, purpose for people in limited settings. There is a reason that 40 percent of all US mass transit trips take place in the New York City metro area.

But it is wholly irresponsible for politicians to continue mass transit’s taxpayer gravy train, which is based on less substance than Kevin Costner’s dramatized auditory hallucinations.

When the next flashy transit project comes to your town, remember to be skeptical. Proponents of light rail, streetcars, and other hugely expensive projects routinely overestimate how many people will use the line and underestimate how much it will cost to build and run. Decades of evidence shows that if you build it, people will still probably drive — and you’ll still be stuck paying for it. 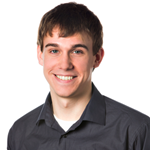