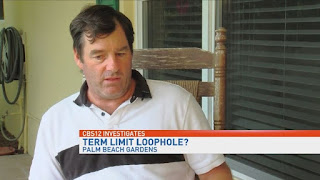 Last we heard of David Levy, the 4-term incumbent Palm Beach Gardens vice mayor was battling in court to sneak around the popular new — and retroactive — term limits law in order to run for a fifth term.

The Palm Beach Gardens term limit law and its retroactivity provision passed in 2014 by 79% and 69%, respectively.  In running in the March 15 municipal election, Levy made the novel case that since he resigned three months before the end of his term that he is no longer an incumbent. As I stated in a previous post on the subject, to my knowledge no court anywhere has permitted a politician to quit early and then immediately run for re-election to avoid a term limits law.

In his May 18 decision, Judge Martin Colin stated without equivocation: “The court finds … a candidate for City Council cannot seek reelection to a third, consecutive term after having been regularly elected to two terms regardless of any break in service.” This is hardly surprising, as this is basically just a restatement of the term limits amendment itself.

But then why is David Levy’s name still on the ballot?

But then why is David Levy’s name still on the ballot for the upcoming run-off election for a council seat against Carl W. Woods?

Interestingly, the judge found a technicality in the retroactivity provision that could be read — although nobody did prior to the court case — to have only one past term count against an incumbent running for reelection, not all of them. This would seemingly permit Levy to be elected to one more term. And, having proven his disrespect for the clear intent of the voters, it is a technicality that Levy aims to exploit.

The offending article — literally the article ‘a’ — is found in the retroactivity provision of Section 4-1 of the city charter, the term limits law: “Service in a term of office which commenced prior to the effective date of any term limit enacted on council members will be credited against any term limitation approved by the Palm Beach Gardens electorate.” The judge took this ‘a’ to mean ‘one,’ as it is a singular article.

Of course, ‘a’ does not necessary mean only one, as for example the article ‘the’ or the number ‘one’ would. Indeed, until the court case every participant in the election assumed as self evident that the provision made the term limits law fully retroactive. The amendment’s authors intended it that way, it was sold to voters that way, voters understood they were voting for full retroactivity and even Levy in trying to gut the term limits law didn’t immediately see this opportunity to attack the law. Instead he led with his absurd ‘break in service’ excuse.

It appears Judge Colin was willing to make this stretch to accommodate Levy as he did not want to overturn the results of the March 15 election. Call it a compromise.

But it might be a moot point anyway as Levy has to win the runoff election before he can be seated again. Even as a long-term incumbent, his victory is not certain. Levy squeaked out a plurality (6,642 votes) in the March 15 election against Carl Woods (6,256 votes) and Kevin Easton (1,103 votes). Easton dropped out, endorsing Woods against the scofflaw. The Palm Beach Post also has endorsed Woods, citing in part the term limits law.

So, the voters of Palm Beach Gardens have the opportunity to finish what they started in 2014 with the electoral blow for competitive elections, rotation in office and improved representation. Don’t forget to vote!