Our nation’s immigration laws are completely blind as to race, religion and ethnicity, and were enacted to protect national security and the lives and livelihoods of Americans.

My previous post for CAPS, “Hillary Clinton’s Immigration Goals Make Her Economic Promises Impossible to Achieve,” focused on how providing potentially tens of millions of illegal aliens with an equal standing in the overflowing labor pool of unemployed or underemployed American and lawful immigrant workers would exacerbate the plight of these desperate workers and their families.

Today my focus will be on how Hillary Clinton’s proposal to provide millions of illegal aliens with lawful status would do irreparable harm to national security and public safety. 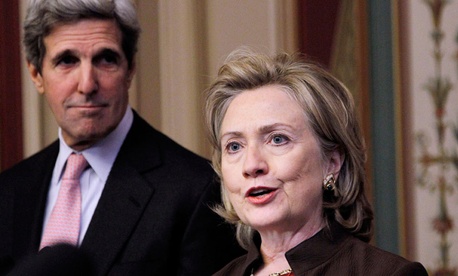 Hillary has made much of having been Secretary of State. During her acceptance speech at the DNC she said, in part, “We will not build a wall,” thereby echoing the remarks of her successor at the State Department, John Kerry who, in his commencement address at Northeastern University several months ago, said, in part, that America could not remain great by hiding behind walls.

I recently wrote a commentary about Kerry’s dangerous globalist agenda that apparently is paralleled by Clinton, “John Kerry: Enthusiastic Proponent of a ‘Borderless World.’”

Metaphorically, America’s borders are her walls.

One of the critical roles of the State Department is to issue visas to aliens who seek entry into the United States. The visa process came under scrutiny by the 9/11 Commission. It identified failures in border security and failures of the visa process that enabled the 19 terrorists in the 9/11 hijackings and terrorists who preceded them. Visa fraud was a means to enter the U.S., allowing them to embed themselves in the country as they went about their deadly preparations.

Given this, any journalist who interviews Hillary Clinton should ask if she has read “The 9/11 Commission Report.”

That report should be required reading for the president of the U.S., all high-ranking members of the administration and every member of Congress.

The official government report, “9/11 and Terrorist Travel – Staff Report of the National Commission on Terrorist Attacks Upon the United States,” focused specifically on the ability of the terrorists to travel around the world, enter the U.S. and ultimately embed themselves here as they went about their deadly preparations to carry out an attack. The preface of this report begins with the following paragraph:

Such aliens are supposed to be carefully screened to prevent criminals and terrorists from gaining entry into the U.S. That system lacks sufficient resources, however, to properly screen them all. In some instances, terrorists such as the Tsarnaev brothers, who carried out the Boston terror attack, had been granted lawful immigrant status, and one of them had become a naturalized citizen.

Faisal Shahzad, the “Times Square Bomber” who detonated a car bomb in Times Square in 2010, also had naturalized prior to carrying out his attack.

Other terrorists had been granted political asylum or participated in the previous amnesty program. Yet Hillary Clinton promises to greatly increase the number of Syrian refugees admitted into the U.S. even though, according to FBI Director James Comey, they cannot be vetted. I wrote about this issue in “How Obama’s Refugee Policies Undermine National Security.”

The U.S. also admits tens of millions of nonimmigrant alien visitors – aliens who are admitted for a temporary period as tourists, students, workers or for other lawful purposes.

However, every American should be concerned about providing millions – perhaps, indeed, tens of millions – of aliens who evaded the vetting process conducted at ports of entry by entering the U.S. without inspection. There are no resources to interview them and no resources to conduct any field investigations. We could not be certain of their identities, their backgrounds or even how long they have been present in the U.S.

While the open borders anarchists blithely refer to these aliens as being undocumented, they are un-inspected.

Think of it this way, you cannot tell a “good guy” from a “bad guy” without a scorecard.

“Undocumented” aliens have no scorecards!