She created the modern pro-family movement and was its greatest activist. Her book changed the Republican party. What most pro-family conservatives today probably don’t know… 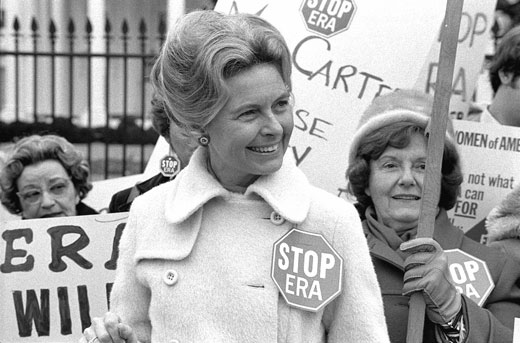 Outside of the White House during the Carter administration.

Phyllis Schlafly, who passed away at age 92 this week, actually created the pro-family movement. She was the greatest and most successful pro-family activist in its history. That is not hyperbole; it is fact. Everyone else is miles behind. We at MassResistance are grateful to have known her and occasionally worked with her.

Unfortunately, most pro-family conservatives under a certain age really don’t know that much about her, or appreciate the enormity of her contributions, which continued up until her death. In our opinion, the numerous obituaries in the conservative and mainstream media about her haven’t done her justice.

A revolution within the GOP

She broke into national prominence in 1964 by publishing a book. Titled “A Choice, Not an Echo” It brilliantly described how for decades the GOP establishment and donor class had been selling out the principles held by average Republican voters and controlling the political process. It’s chilling to realize how much similar it was to the situation that has fueled the rise of Donald Trump’s campaign in 2016. She saw the problem clearly back in the 60s.

At first she felt no publisher would take the book, so she sold it out of her garage. It really caught on, eventually selling over 3 million copies. It changed the history of the Republican Party.

“A Choice Not an Echo” is credited by many with igniting much of the Republican voter base and propelling Barry Goldwater’s nomination for president in 1964 over the will of the party establishment, and opening the door for Ronald Reagan’s run. Her book was that powerful.

But Phyllis (everyone we knew called her by her first name) is best known for her work stopping the Equal Rights Amendment (ERA) in the 1970s and early 1980s.

Today, many pro-family activists take on big causes. But no one else ever took on anything like the ERA single-handedly and won.

Constitutional amendments must pass two-thirds of both houses of Congress, and then three-quarters of the state legislatures (38 states) within seven years after that.

The Equal Rights Amendment was considered by everyone to be impossible to stop. In 1971 it blew through the US House of Representatives by 354-24. It then passed the Senate by 84-8. In 1972 was sent to the states for ratification. Within the first year, 30 state legislatures had ratified it. It was on a very fast track to become a Constitutional amendment.

Phyllis could see that the ERA was being sold to Americans as a noble “equal rights” cause, but it was really a Trojan horse being pushed by the most radical elements of society, particularly lesbian activists.

In her correct analysis, the ERA would be used to draft women for the military, force taxpayer-funded abortions and homosexual “marriage”, promote a constitutionally mandated breakdown of Judeo-Christian morality, push a new sexual revolution, re-write divorce laws, and much more. Far from helping women, it would make women’s lives much, much worse.

Women are different from men, she said, and “feminism” is a false ideology that tries to make man and women the same.

Straight talk. A key part of her attack was that unlike the wimpy mainstream pro-family movement of today, Phyllis was willing to tell the sordid, uncomfortable truth about the ERA and forces behind it – calmly, unemotionally, and fearlessly – refusing to water it down into mushy platitudes. This infuriated the Left and annoyed the establishment Republicans. She was definitely not “politically correct.”

The forces that lined up aggressively promoting the ERA were overwhelming. This included the full Democratic and Republican establishments, including enthusiastic support from Presidents Gerald Ford and later Jimmy Carter,  and their wives. It included virtually all of Hollywood, with major TV and movie stars doing endorsements, support from major corporations, and of course aggressive support by the entire mainstream media.

Like many conservatives, Phyllis was hated by the Left with a visceral passion. During her anti-ERA battle she was screamed at, swore at, spat on, had things thrown at her, and even had pig’s blood poured on her. The infantile emotions of liberals haven’t changed at all. The fact that she routinely out-debated them made it even worse!

It had eerie similarities to today’s huge “culture war” battle.

In 1972 Phyllis began her fight to stop the ERA. She was not only an incredibly articulate writer, speaker, and political thinker, but she was also an unbelievable organizer. She brought together and mobilized a very formidable army of thousands of women, mostly housewives, from across the country. This was before the Internet or even fax machines existed! And she taught them how to go to their state legislatures and lobby strategically and effectively despite the opposing them. Legislators had never seen anything like it.

She also created hard-hitting pamphlets, wrote countless newspaper columns, gave speeches across the country, and appeared on numerous television interview shows — usually against a stacked deck, but still coming out on top.

Over the next eight years, five more states ratified ERA. But also during that time five other states – under pressure from Phyllis and her forces – rescinded their ratifications.

A year before the 1979 deadline Congress voted to extend the ratification deadline three more years, until June 30, 1982! But it didn’t work. The Schlafly army kept enormous pressure on any other states from ratifying it.

In the end, the ERA fell short by three states.

The larger story of this impossible victory is really fascinating for activists today.In 2009 Phyllis made this exciting video discussing it in detail. (It’s 43 minutes long, but worth watching.)

The ERA battle and was the beginning of the modern pro-family movement in America.

Then as now, the Left  had enormous, seemingly limitless funding. Phyllis and her group, called the Eagle Forum had only what the members could pull together. They paid for their own travel and supplies.

Phyllis had an almost supernatural ability to focus on success. This is a quality that is almost completely lacking in today’s pro-family movement, which seems to fold its tent at the first sign of trouble.

In the 1980s, the Moral Majority, Christian Coalition, Focus on the Family, and other groups organized nationally and took on political battles – and more large national pro-family groups blossomed in the 1990s. But Phyllis had paved the way. And none of those other groups has changed America the way she did.

Phyllis’s list of other accomplishments over the years is monumental. You can read about most of them in this Human Events article.

After the stunning victory over ERA, Phyllis Schlafly’s Eagle Forum organization blossomed. It has chapters across America and at one point, according to reports, had nearly 100,000 members. Over the years, Phyllis would tirelessly visit chapters around the country and speak at their banquets and work with their leaders.

Interestingly, the chapters had and still have a reputation for being much more “moderate” and non-confrontational in their approach to political action than Phyllis herself, although they are completely loyal to her ideas and philosophy and do not compromise on core pro-family principles.

This is probably because the women who take on the chapter leadership positions tend to be more “organizers” rather than firebrands, and are often married to wealthy husbands who can help with the chapter’s expenses. This is completely understandable, but has sometimes caused confusion to other conservatives expecting a more aggressive approach. And as a result, the chapters have rarely been as successful as Phyllis herself in stopping destructive liberal forces.

We believe that her independent approach also allowed Phyllis to build an independent fundraising network outside of the unreliable and mushy “mainstream” pro-family donor community.

A lot of people today just assume that the Republican Party has always been pro-life. But after the Supreme Court abortion decision in 1973, the GOP establishment had little interest taking a stand. The pro-life platform was predominately the force of will of Phyllis Schlafly, who attended every GOP national convention since 1952, and got her people on the platform  committee.

As the “culture wars” began to heat up in the 1990s, Phyllis never seemed to fit in with the emerging national pro-family establishment in America. And she was rarely invited to their national conferences or asked to participate in major events or planning sessions.

We consider that a mark of high distinction for Phyllis. It appears to us that she recognized that the national pro-family movement had become like the GOP establishment – a double-dealer to its supporters. Over time the pro-family “establishment” has consistently compromised the core principles of the larger base. It’s happened on homosexuality, civil unions, gay marriage, comprehensive sex-ed, and most recently transgenderism. They do it to appease the more moderate conservative donor class and avoid confrontations with the LGBT movement and the liberal media. Phyllis has consistently refused to play that dishonest game.

That “mild” approach would never have won the ERA battle. Phyllis never wavered on her core principles on any of the increasingly incendiary “culture war” issues. Instead, she held her own annual pro-family conference where she took on the issues she felt important, honored the politicians who deserved honor, and did it her way.

MassResistance and other front-line groups

Especially in the last 15 years (while she continued her heavy schedule of writing books, newspaper columns, and newsletters, Phyllis was a beacon of steadfast core pro-family and constitutional principles in a sea of compromise and uncertainty.

She aligned with true conservative politicians, not just the popular GOP luminaries. She welcomed and supported the work of front-line pro-family groups, including MassResistance, and numerous pro-life first-time political candidates.

Brian Camenker of MassResistance met her in 1997 when she came to Boston and gave him a special award for “dedicated work for God, Family, and Country” at her Eagle Forum annual banquet.

She later interviewed Camenker on her national radio show.  Camenker also worked with her at a national gathering in Washington, DC in 2006. She received the regular MassResistance email updates and occasionally emailed us a comment on them. She personally donated to MassResistance – quite thrilling in itself.

In 2009 she invited Camenker to be a featured presenter at her annual conference in St. Louis on the topic of “How to counter the radical homosexual extremist movement.”

An intellectual dynamo until the end

Most people slow down when they become elderly. But Phyllis was an exception. She never missed a beat. Through her eighties she continued to be a forceful and dynamic speaker on the college circuit – often taking considerable abuse from “liberal” audiences while continuing to dish it out.

Right up until her death she continued to write books, columns, and articles that were simply outstanding. And it’s utterly amazing to watch the videos her interviews of her sharp analysis of current events from even weeks before her passing.

And the liberals hated her even in death. The Boston Globe called her “polarizing.” The wave of hateful and odious tweets and posts from the mindless liberal pundits and celebrities is a testament to her power over them.

There will never be another Phyllis Schlafly. She was the best. RIP.

The media elites feel that shiver up the spine — and it’s not victo...
Scroll to top