Pope Francis has issued a climate change challenge directly to President Elect Trump. The Pope, in thinly veiled speech, urged Trump not to withdraw the U.S. from the United Nations Paris agreement reached in 2015. The UN treaty has been said by critics to be “history’s most expensive treaty’,” with a “cost of between $1 trillion and $2 trillion annually.”

Pope Francis warned of the “crisis of climate change.”  “The ‘distraction’ or delay in implementing global agreements on the environment shows that politics has become submissive to a technology and economy which seek profit above all else,” Francis said, in what Reuters described as “a message that looked to be squarely aimed at” Trump.

Speaking to a group of scientists, including physicist Stephen Hawking, the pope said in his speech that scientists should “work free of political, economic or ideological interests, to develop a cultural model which can face the crisis of climatic change and its social consequences”. The Pope has previously urged Catholics to pray for a UN climate agreement. See: Pope urges prayers for passage of UN climate treaty! Tells faithful ‘to ask God for a positive outcome’ for Paris UN agreement (Pope Francis greets Stephen Hawking (R), theoretical physicist and cosmologist, during a meeting with the Pontifical Academy of Sciences in Vatican, November 28, 2016. Osservatore Romano/Handout via Reuters)

Pope Francis also called for “an ecological conversion capable of supporting and promoting sustainable development.” In 2015, the Pope issued an encyclical on climate and the environment titled “Laudato Si: On Care for Our Common Home.”

The report noted: “The Vatican relied on advisers who are the most extreme elements in the global warming debate.  These climate advisers are so far out of the mainstream they even make some of their fellow climate activists cringe…The Vatican advisers can only be described as a brew of anti-capitalist, pro-population control advocates who allow no dissent and are way out of the mainstream of even the global warming establishment.”

Climate experts who have looked at the UN climate agreement think Trump is correct to dismantle it. Danish statistician Bjorn Lomborg wrote “Trump’s climate plan might not be so bad after all.”

Lomborg added that Trump withdrawing from the UN treaty “will will stop the pursuit of an expensive dead end” because even if you accept the climate claims of the UN, the agreement “will matter very little to temperature rise.”

University of Pennsylvania Geologist Dr. Robert Giegengack  has also noted: “None of the strategies that have been offered by the U.S. government or by the EPA or by anybody else has the remotest chance of altering climate if in fact climate is controlled by carbon dioxide.”

Climate Depot Note: “In layman’s terms: All of the so-called ‘solutions’ to global warming are purely symbolic when it comes to climate. So, even if we actually faced a climate catastrophe and we had to rely on a UN climate agreement, we would all be doomed!”

Francis has faced considerable criticism for his climate activism from both inside the Vatican and out.

See: No Consensus inside the Vatican: Skeptical Vatican Cardinal takes a swing at Pope’s climate encyclical: The Catholic Church has ‘no particular expertise in science’ – The Vatican’s financial chief, Cardinal George Pell,

Flashback: Fox’s Andrew Napolitano: Pope Francis is ‘somewhere between a communist with a lowercase ‘c’ and a Marxist with an uppercase ‘M’

Climate Statistician Dr. Matt Briggs was blunt in his criticism of the Pope’s climate claims. “The Pope Is Wrong About Global Warming,” Briggs declared.

“The Pope declared it would by ‘sad, and I dare say even catastrophic,’ were particular interests to prevail over the common good at the upcoming climate conference in Paris.” It would be sadder if we signed over to politicians even more control than they already have to solve a problem that doesn’t exist. That would really hurt The Poor™. So why does the Pope believe all these demonstrably false things? Bad advice, in part,” Briggs wrote in 2015. 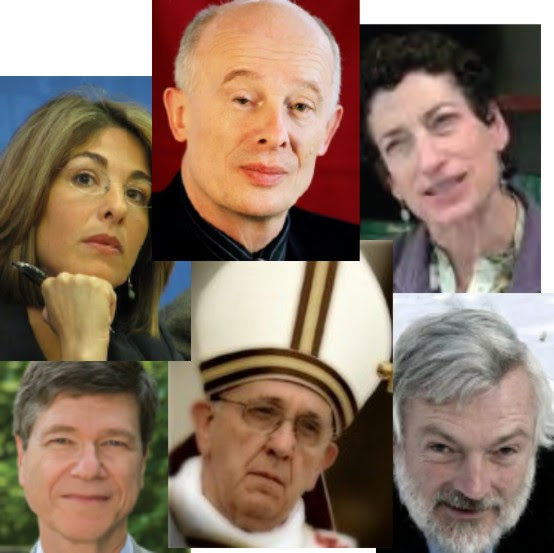 Listen Now – Full 10 minute interview: Morano on the Pope on SRN News radio (9-23-15): ‘This is all about ideology and central planning and the Pope is now serving as the chief religious lobbyist for man-made global warming and the UN. And this is a very ill-conceived role for any pope to play. It’s hard to say the pope is being used, because he is willingly allowing himself to be used by the media and by the UN as a climate lobbyist.’

Climate Depot’s Marc Morano comment: “No matter how nuanced and faithful to Catholic teachings this encyclical attempts to be, this passage where the Pope urges Catholics to ‘ask God for a positive outcome’ to the current UN global warming treaty process, will overpower every other message. The Pope is clearly endorsing a specific UN political climate treaty and essentially declaring he is on a mission from God to support a UN climate treaty. He even conjures up the comical concept of climate ‘tipping points’.” See: Flashback: Earth ‘Serially Doomed’: Climate Depot Factsheet on Inconvenient History of Global Warming ‘Tipping Points’ — Hours, Days, Months, Years, Millennium

Bloomberg Pope poll shows climate lowest of all issues: Only 33% of Americans agree with Pope’s warmism –

Bloomberg Poll: America Loves Pope Francis, But Not His Stance on Climate Change – Bloomberg Poll reveals 56% of U.S. Catholics believe the Pope’s ‘climate change’ push is a ‘bad direction’ for the church. Only 33% think it amounts to a ‘good direction.’

Study: Papal letter, Laudato Si’ fails to inspire Catholics on ‘climate change’ – “While Pope Francis’ environmental call may have increased some individuals’ concerns about climate change, it backfired with conservative Catholics and non-Catholics, who not only resisted the message but defended their pre-existing beliefs by devaluing the pope’s credibility on climate change,” says Nan Li, lead author of the study.

Podesta Emails: ‘Pope Is the Real Deal’ on Climate
THE POPE’S BOSS?! Wikileaks reveals Pope and Soros Forged An Unholy Alliance On ‘Global  – ‘In 2015, the Soros operatives, embedded in the Vatican, directed Pope Francis’ Environmental Agenda, by delivering for Soros and the UN, an Apostolic Exhortation on Climate Change, and a prized papal endorsement of the UN Sustainable Development Goals and the Pope’s apostolic blessing on the Paris Climate Treaty. Soros won the environmental trifecta sealed and delivered by Pope Francis.’ 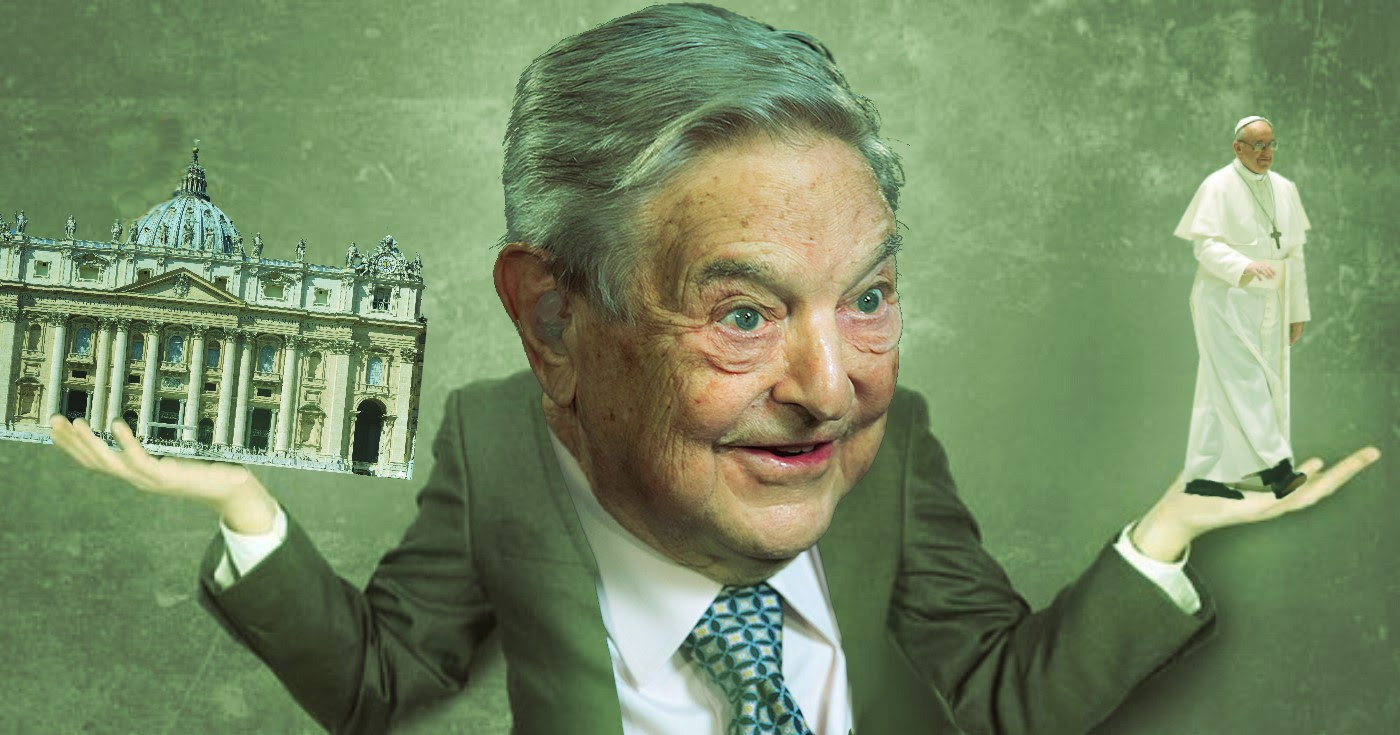 Pope Maker: The Soros Syndicate Partners With Vatican to Promote UN Climate Agenda – On March 13, 2013, Soros and his UN operatives understood that the climate instantly warmed and opportunities abounded with the new leftist Argentine pontiff. George Soros could not have imagined a more perfect partner on the world stage, one he has been searching for his entire career: a major religious leader pontificating as the moral authority for the environmental, borderless countries, mass migration, and pro-Islamic movements.

Climate Statistician Dr. Matt Briggs: ‘The Pope Is Wrong About Global Warming’ – The Pope declared it would by “‘sad, and I dare say even catastrophic,’ were particular interests to prevail over the common good at the upcoming climate conference in Paris.” It would be sadder if we signed over to politicians even more control than they already have to solve a problem that doesn’t exist. That would really hurt The Poor™. So why does the Pope believe all these demonstrably false things? Bad advice, in part.

Bjorn Lomborg: On climate change, Pope Francis isn’t listening to the world’s poor – Lomborg: ‘Those who claim to speak for the poor and say that climate change is the world’s top priority are simply wrong. The world has clearly said it is the least important of the 16 priorities the UN focuses on. And when those campaigners suggest the poor don’t know what’s best for them because carbon cuts will stop global warming from making all other problems worse, they’re wrong again. The poor are typically much better helped directly rather than via climate aid.’

Kudos! A religious leader who gets it! Flashback 2006: Catholic Cardinal George Pell: ‘In the past, pagans sacrificed animals and even humans in vain attempts to placate capricious and cruel gods. Today they demand a reduction in Co2 emissions’

Watch: Video of climate activists at Papal rally in DC reveals they don’t believe in God – ‘I’m more involved with the nature religions’ – ‘The best part, most of those in attendance didn’t even believe in God! And they certainly were not convinced by the Pope’s position on climate to think more critically about other matters faith and Catholic teaching, such as issues like abortion. If the Pope and the Vatican think that by taking a step closer to the left on climate change they would make people more open to serious matters of faith and morality, they are flat out wrong.’

UK Sun newspaper: Pope Francis committing ‘Holy Wrong’ – ‘He has no business banging on about climate change’ – ‘Stick to religion, Your Holiness’

Alabama’s climatologist Dr. John Christy: I would give the Pope some homework on global warming – Regs ‘will actually do nothing to change what the climate is going to do’

‘We have never lived in better times’: Aussie Geologist Dr. Ian Plimer: Heaven and Hell, the Pope condemns the poor to eternal poverty – This book criticises the Encyclical and shows that we have never lived in better times, that cheap fossil fuel energy has and is continuing to bring hundreds of millions of people from peasant poverty to the middle class and that the alleged dangerous global warming is a myth.

‘Only when Third World children can do homework at night using cheap coal-fired electricity can they escape from poverty.’

Robert Redford: The Pope is right about climate change – Redford: ‘Flooding, drought, wildfires, and hurricanes – all you have to do is open your eyes to see the damage being done, and it’s going to get worse. We can no longer claim ignorance as an excuse for inaction. The jury is no longer out – climate change is real. It is not just a threat for the future, but happening here and now. And as Pope Francis so eloquently points out, climate change is a moral imperative that transcends politics.’