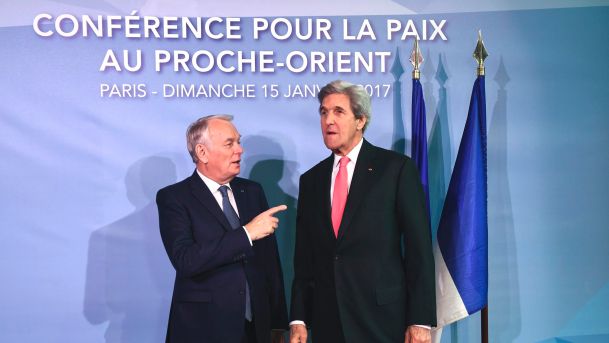 Given a choice, monsieur the diplomat, between two International Peace Conferences-Kazakhstan for Syria or Paris for the Middle East- which would you prefer? Would you like to plough your brain trying to sort out the Islamist rebels from the plain Islamists, finding someone less brutal to replace Assad and a few factions to support him, resisting pressure from the Russians, Iranians, Turks, Hezbollah and the like? Wouldn’t you rather sit around a table in Paris, rubbing shoulders with distinguished ladies and gentlemen, and repeating that it is urgent to settle the “oldest conflict” by finally implementing the oldest solution: two states side by side in security?

For low ranking journalists that didn’t have the chance to come anywhere near the delegations, “covering” the Conference meant  receiving the elevated  address of Foreign Affairs Minister Jean-Marc Ayrault who would present the conclusions reached by the diplomats united in a spirit of sincere friendship for the parties to the conflict. (The day after the Conference, that hasn’t generated much interest worldwide, documents in several languages and videos of some speeches were posted on the Ministry website.)

I easily found a seat in the second row. Most of the people around me were speaking Arabic. I don’t usually cover events in the ministries. My stamping ground is more in the neighborhood of the UPJF, the BNVCA, and defamation hearings at the Palais de Justice. I greeted Gideon Kuntz, didn’t see any familiar faces… until a woman took a seat on my left, turned to me, and said: “I know you.” Right. We met about ten days ago at a party thrown by a journalist friend.  Hustle and bustle near the door. The minister will enter any minute. My fellow American gives me some inside information: “A little while ago I was sitting next to a Palestinian. He told me that the father of one of the female soldiers killed in Jerusalem wrote on his Facebook page, ‘What can you expect when we keep them cooped up like that?'” Brushing aside a dozen reactions that tumbled around in my mind, I answered like a good journalist: “Could be. We’d have to verify it.” She shrugs: “It’s Facebook.” And I say to myself: “It’s a Palestinian.” The minister walks in, accompanied by about 15 people that line up along the wall.

Busy taking notes in my red moleskin notebook with my real fountain pen, I don’t even have the fun of observing the audience. Except for the bald head of Harlem Désir, foreign relations secretary of the Socialist party, seated right in front of me. I wished I could remind him of his gallantry that day in 1990 when a momentous wind storm caught us on the top floor of the Arche de la Défense, during an encounter with delegates from Central Europe. Maybe they represented the new democracies? The wind forced open the sliding glass doors and came barreling into the hall. You could see the wind, it was light green and terrifying. After a long wait someone finally came to take us to an elevator that brought us down to an exit at the top of a long flight of stairs. The wind was too strong, it almost blew me away, I grabbed onto Harlem Désir who escorted me all the way to the metro entrance. Those were different times.

Today, too, the times have changed. The arrogant disdain for Israel that marked the first yeas of the century has morphed here into moderate, measured benevolence, all soft and gentle. Everything about the Conference, from the motivation, hopes, and concerns, to the final recommendations is dipped in the honey of sincere egalitarian friendship. Everything is unanimous, they are all united in the same spirit, they all condemned the horrible terror attack in Jerusalem and all forms of violence and incitement to violence. But. But resolution 2334 of the UN Security Council denounced the colonization; this decision is “stamped with international legality, it’s serious.” To show just how serious that condemnation is, the minister used a strange expression: “it is the voice of the world that spoke.”

And that was the sense of his whole brief speech. The united assembly of more than 70 countries and organizations had acted like a supreme being that observes, weighs, judges, and speaks in a unanimous voice to say the two-state solution, the only viable solution, is in danger. What can be done to reinforce the engagement of the international community and persuade the conflicting parties to resume negotiations? Because direct negotiations are the only way to solve the conflict. The parameters are known: ’67frontières, major UN resolutions, and the 2002 Arab initiative.  Why not “Auschwitz borders?” Jean-Marc Ayrault could have said it straight out in that honeyed voice, the voice of the world, the voice of sincere friendship for Israelis, for Palestinians… He could have said it that way, without a change of tone, without reservations, in his role as honorable spokesman of the international community that says the Law.

The minister repeats that it is urgent to promote the two-state solution, to convince Israelis and Palestinians to resume direct negotiations that, he says again, are the only way to resolve this conflict that has been going on for 50 years, and “produced” 3 wars since 2006. We cannot have stability in the Middle East without peace between Israel and Palestine, peace that is desired by the entire international community. And so on and so forth. Only good things. Peace and friendship and economic development. We are ready to help, says the minister. Help who? The Palestinians that for decades have been swallowing up exorbitant contributions in the belly of corruption? Europe will be able to help the flourishing super high tech Israeli economy that just wants to keep growing without shackles? What encouragement can be expected from France that voted-in sincere friendship and for the good of Israel-for labeling products from the “colonies”?

The minister concludes modestly: we are realists. It’s step by step, little step by little step that we will reach our goal. And sums up: “This Conference is an outstretched hand.”

Three little questions are taken. Q: Will the communiqué be presented tomorrow at the EU foreign affairs Council and on the 17th at the Security Council?  A: Yes for the EU no for the UN.

Q: You said the transfer of the American embassy to Jerusalem would be a provocation. What will be done if the transfer is in fact made? A: I’ll discuss it with Rex Tillerson.

Q: A few months ago France was prepared to recognize the Palestinian state. Is that still on the table? A: We never said it like that. It was meant to be unilateral. We do not want any misunderstanding on that score. Everything will be done in the spirit of this Conference: subdued, restrained, moderate.

End of story. Gidéon, who had tried in vain to ask a question, drops his arm, exasperated.

I leave the building, brave the icy rain, cross Paris in a packed bus, chilled to the bone, starved (no ministerial petit-four for us), and prepared to face up to one more lost cause before midnight: the second debate of the presidential primaries of the left. But first I dash over to i24 news, the only channel that mentions the peace conference. Big news! The Brits opted out of the voice of the world. They didn’t sign the declaration [and subsequently blocked its adoption by the EU Council]. Did my American neighbor know? How about the Irish correspondent she introduced to me just before we went our separate ways? One thing is certain: Jean-Marc Ayrault knew, all the time he was telling us about the unanimous unanimity. Ça alors…

Having struggled for two weeks to find practical information about the venue and accreditation procedures, I had come to think that the dreaded Conference was virtual. Nothing to compare with the urban effervescence last spring, before the weekly demonstrations against the el Khomri labor reform. There were no signs of prestigious delegations in our city or our media.

So it seems that instead of accelerating the tempo of the latest Palestinian diplomatic offensive that began with the UNESCO resolutions forged to slice the bonds between the Jewish people, the land, and the sacred places, the ghost Paris Peace Conference sabotaged it. Hopes of carrying the conclusions to the Security Council where they would be transformed into a binding resolution are apparently dashed.

The closing address like the Conference itself was a sort of non-sequitur: Divorced from reality, as vague as it was pretentious, devoid of concrete details on the chain of words and deeds that have led the peace process to its current impasse. If the conflict persists, it’s not for lack of benevolent attention from the international community. The territorial Israel-Palestinian conflict that could have been solved by the creation of a Palestinian state is imaginary. What is happening and has been going on for more than 50 years, for more than  1400 years, that produces countless wars and atrocities is the old Islamic vindictive hatred* of Judaism. What is playing out in the Middle East is 21st century jihad conquest held in check by a sovereign Jewish state that rejects the suicidal advice poured on it by an ancien régime that calls itself the “international community.”

We owe ourselves a brief moment of satisfaction at the fiasco of the Paris Conference before we face up to the coming episodes of the saga. If it’s true that they cried victory in Ramallah, we should forget the outright refusal of the “Kerry parameters” hammered out by PLO executive committee’s Mustafa Barghouti:

“First, you cannot make the issue of Palestinian refugees only an issue of compensation; you cannot deny people their right to return to their home,” Limiting the rights of Palestinian refugees to compensation? Unacceptable! “Second, recognition of Israel as a Jewish state would deny the right of the Palestinian people who are citizens of Israel and that is totally unacceptable.” Israel cannot be a Jewish and a democratic state at the same time,” concludes Barghouti, he too speaks the voice of the world.

EDITORS NOTE: The original French version of this column was published by Infoequitable.org.