The Indivisible Team (IT) was established by a group of five former Democratic congressional staffers in the immediate aftermath of Donald Trump’s victory over Hillary Clinton in the November 2016 presidential election. One of the five founders, IT board president Ezra Levin, had previously served as associate director of government affairs at the Corporation for Enterprise Development, and as an AmeriCorps VISTA employee in the Homeless Services Division of the San Jose Department of Housing. Another key founder, IT board secretary Angel Padilla, had worked as an immigration policy consultant at the National Council of La Raza, and as an adviser to Rep. Luis Gutiérrez (D-Illinois) from 2009-11. 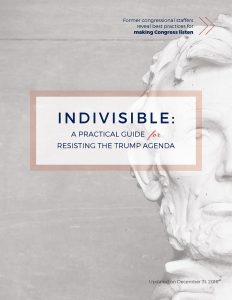 Upon its inception, IT’s first order of business was to launch a website devoted to providing leftists and liberals with strategies for countering the “radical, racist, and sexist” objectives of President Trump. This website features a tool kit for local IT organizers, a daily calendar that lists national events and calls-to-action, and most importantly, the group’s signature publication, Indivisible: A Practical Guide for Resisting the Trump Agenda. During December 2016 and January 2017, this Guide was downloaded more than 1 million times.

Rejecting the very legitimacy of Donald Trump’s presidency, the IT Guide portrays him as “the biggest popular-vote loser in history to ever call himself President-Elect.” And because Trump “will attempt to use his congressional majority to reshape America in his own racist, authoritarian, and corrupt image” despite the fact that he “has no mandate” from the voters, IT pledges to “stand indivisibly opposed to Trump and Members of Congress [MoC’s] who would do his bidding.”

The tactics and strategies advanced in the IT Guide are modeled on those of the conservative Tea Party movement that came to prominence during President Barack Obama‘s first term in office. Though the principles of the Tea Party are anathema to IT, the Guide points out that “we saw these activists take on a popular president with a mandate for change and a supermajority in Congress.” “If a small minority in the Tea Party can stop President Obama,” IT reasons, “then we the majority can stop a petty tyrant named Trump.”

Specifically, the IT Guide advises leftists to follow the Tea Party model of being “locally focused” rather than attempting to appeal to people across broad geographic areas, and “almost purely defensive” – meaning that they should expend their energies chiefly on opposing Trump rather than on “developing their own [alternative] policy agenda.” “Defining a proactive agenda,” said IT in December 2016, “is time-intensive, divisive, and, quite frankly, a distraction, since there is zero chance that we as progressives will get to put our agenda into action at the federal level in the next four years.” The goal, therefore, should be to “stall the Trump agenda by forcing [Congressional Republicans] to redirect energy away from their priorities,” on the theory that “a day that they spend worrying about [rowdy IT-affiliated protesters] is a day that they’re not ending Medicare, privatizing public schools, or preparing a Muslim registry.”

A related objective of IT is to “sap Representatives’ will to support or drive reactionary change.” “Every time your MoC signs on to a bill, takes a position, or makes a statement,” says the Guide, “a little part of his or her mind will be thinking: ‘How am I going to explain this to the angry constituents who keep showing up at my events and demanding answers?’”

The IT Guide advises progressive activists to form local groups of people who reside in the same congressional district, to fight “the racism, authoritarianism, and corruption” of the Trump agenda which “explicitly targets immigrants, Muslims, people of color, LGBTQ people, the poor and working class, and women.” “We strongly recommend making a conscious effort to diversify your group,” adds the Guide, “and particularly to center around and defer to communities of people who are most directly affected by the Trump administration’s racism, xenophobia, transphobia, homophobia, and antipathy toward the poor.” As of January 27, 2017, IT claimed that “more than 4,500 local groups” had already been formed “in nearly every congressional district in the country.”

In addition, the IT Guide instructs progressives to attend local “town halls” or public listening sessions held by Republican MoC’s, where they should each try to ask at least one prepared question designed to put the MoC on the defensive. The Guide recommends that the IT members in attendance should: (a) sit separately in different sections of the room, so as to avoid the appearance of collaboration and to “reinforce the impression of broad consensus”; (b) applaud in response to one another’s questions and/or comments; (c) collectively boo in response to things said by the MoC; and (d) “record everything” with a smart phone or video camera, and subsequently post those clips on social media or make them available to reporters.

The IT Guide also encourages activists to attend other local public events where MoC’s sometimes appear, such as parades, infrastructure groundbreakings, etc. To “optimize visibility,” says IT, these confederates should “stick together as a group, wear relatively similar clothing / message shirts, and carry signs in order to be sure that [their] presence is noticeable.” Further, they should “be prepared to interrupt and insist on [their] right to be heard”; chant slogans about an issue of concern; try to speak with reporters who are present at the scene; and threaten to hold local sponsors of the event accountable with bad publicity if they support MoC’s who back the Trump agenda.

Moreover, the IT Guide exhorts progressives to visit their MoC’s District Office, where they can either meet with the MoC directly or with staffers, and to subsequently publicize their visits via social and traditional media. Similarly, IT advocates the use of mass telephone and email campaigns targeting the offices of MoC’s.

On January 2, 2017, Ezra Levin, Angel Padilla, and fellow IT founder Leah Greenberg co-authored a New York Times op-ed introducing their fledgling organization to the American public. While characterizing the Tea Party’s political success as “a disaster for President Obama’s agenda and for our country” because the movement’s “ideas were wrong” and its “often racist rhetoric and physical threats were unacceptable,” the authors noted that the Tea Partiers “understood how to wield political power.” Specifically, said Levin et al, Tea Party activists had “rattled our elected officials” by: (a) waging “a relentless campaign to force Republicans away from compromise and [to] tank Democratic legislative priorities”; (b) “ensur[ing] that legislation that did pass, like the Affordable Care Act, was unpopular from the start”; and (c) “hijack[ing] the national narrative and creat[ing] the impression of broad discontent with President Obama.” The Indivisible Team would seek to use these same tactics against President Trump and the Republicans.

How Obama is scheming to sabotage Trump’s presidency

EDITORS NOTE: This column originally appeared on Discover The Networks.