I shared last year a matrix to illustrate Milton Friedman’s great insight about the superior results achieved by markets compared to government. 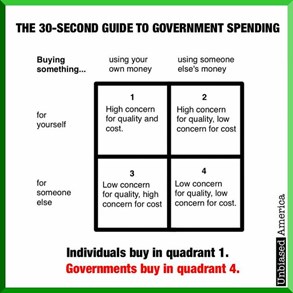 Incentives explain why markets work best. When you spend your own money on yourself (box 1), you try to maximize quality while minimizing cost. And that drives the businesses that are competing for your money to constantly seek more efficient ways of producing better products at better prices.

This system generates creative destruction, which sometimes can be painful, but the long-term result is that we are vastly richer.

Governments, by contrast, don’t worry about efficiency or cost (box 4).

Today, though, let’s use Friedman’s matrix to understand the shortcomings of the US health care system. Way back in 2009, I opined that the most important chart in health care was the one showing that American consumers directly paid for less than 12 percent of health expenditures. 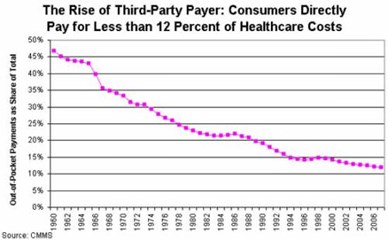 For all intents and purposes, instead of buying health care with their own money, they use other people’s money (box 2), a phenomenon known as third-party payer. And because most of their health expenses are financed by either government (thanks to Medicare, Medicaid, Obamacare, etc) or insurance companies (thanks to the tax code’s health care exclusion), consumers focus only on quality and don’t care much about cost.

That 2009 column was written before Obamacare’s enactment, so let’s see if anything has changed. 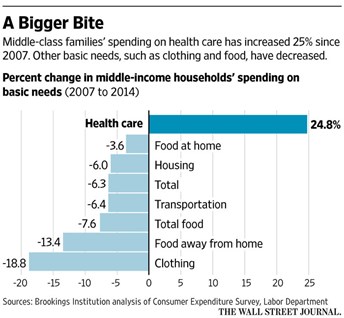 Well, we know health care has become more expensive. But do we know why?

The answer, at least in part, is that consumers are directly financing an even smaller percentage of their health care expenses. In other words, the distortions caused by third-party payer have become worse.

Here’s the most-recent data from the federal government’s Centers for Medicare and Medicaid Services (specifically the National Health Expenditures by type of service and source of funds, CY 1960-2015). Consumers are now paying only 10.5 percent of health care costs. 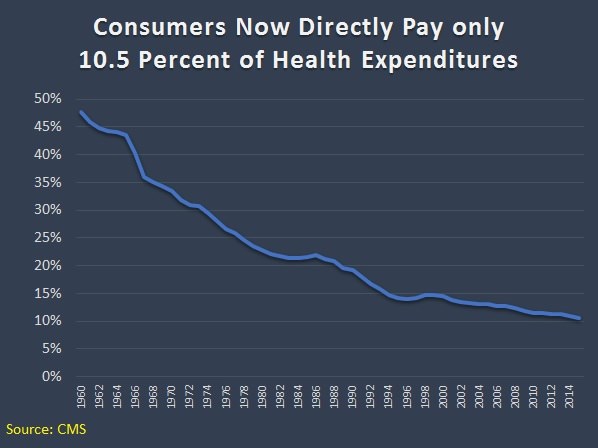 Are we getting better health care for all the money that’s being spent?

That doesn’t seem to be the case. Here’s another chart from the archives. It compares per-capita health spending in various nations with average life expectancy. 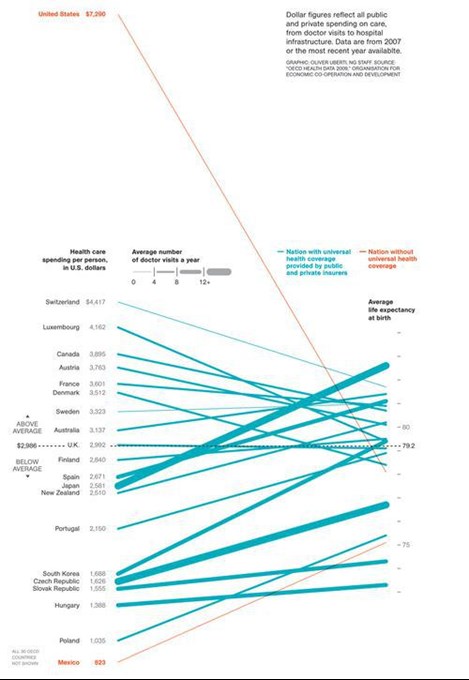 As you can see, the United States is not getting more bang for the buck. And I very much doubt an updated version of those numbers would show anything different.

Heck, we even have more government spending on health care, per capita, than many nations with fully nationalized systems.

So if we’re not buying better health outcomes with all this money, what are we getting?

The blunt answer is bureaucracy and inefficiency. Here are some excerpts I shared years ago from a column by Robert Samuelson.

There are 9 times more clerical workers in health care than there are physicians, and twice as many clerical workers as registered nurses. This investment has not paid off in superior outcomes or better customer service, however. …Every analysis of medical care that has been done highlights the significant waste of resources in providing care. Consider a few examples: one study found that physicians spent on average of 142 hours annually interacting with health plans, at an estimated cost to practices of $68,274 per physician (Casalino et al., 2009). Another study found that 35 percent of nurses’ time in medical/surgical units of hospitals was spent on documentation (Hendrich et al., 2008).

Let’s close with a chart from a left-wing group that wants a single-payer system.

And this chart clearly makes a compelling case that the current approach in the United States is very wasteful. 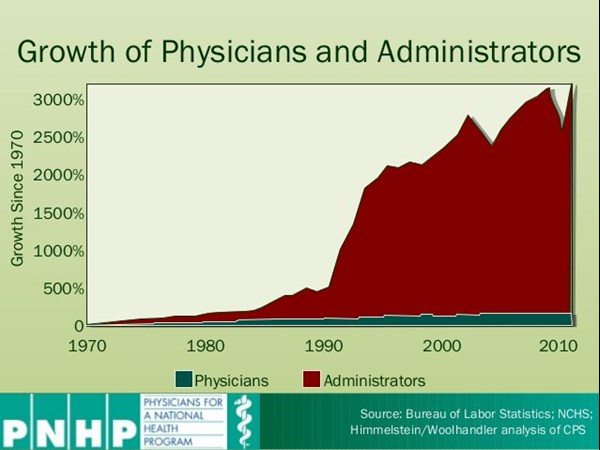 For what it’s worth, I’m slightly skeptical about the veracity of the numbers. Why, for instance, would there be a sudden explosion of administrators starting about 1990?

But even if the data is overstated, I’m sure the numbers are still bad. We see the same thing in other areas of our economy where government-instigated third-party payer enables waste and featherbedding. Higher education is an especially shocking example.

The real issue is how to solve the problem. Our leftist friends think a single-payer health care system would solve the problem, but that would be akin to nationalizing grocery stores to deal with the inefficiencies created by food stamps and agriculture subsidies.

The real answer, as Julie Borowski explains in this video, is unraveling all the government interventions that caused the problem in the first place.

And if you want another video on the topic, here’s a Dutch expert making similar points. I also recommend this clever cartoon video that explains third-party payer. And this Reason video on how costs are lower when actual markets operate.

And if aren’t already numbed by lots of data, Mark Perry and Devon Herrick have more evidence of lower costs when third-party payer is reduced.