Earlier today, I gave a speech about populism and capitalism at the Free Market Road Show in Thessaloniki, Greece.

But I’m not writing about my speech (read this and this if you want to get an idea of what I said about American policy under Trump). Instead, I want to share some remarkable data from a presentation by Ewa Balcerowicz of Poland’s Center for Social and Economic Research.

She talked about “The Post Socialist Transition in Poland in a Comparative Perspective” and showed that Poland and Spain had similar living standards after World War II. But over the next 40 years, thanks to the brutal communist system imposed by the Soviet Union, Poland fell far behind. 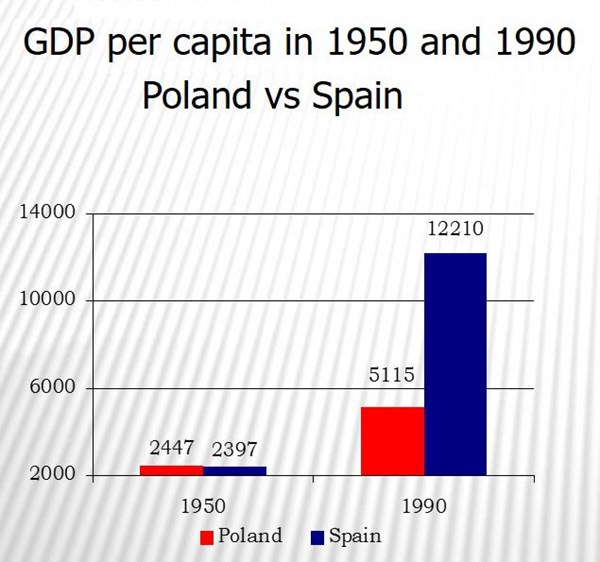 But look what has happened over the past 25 years.

Per-capita GDP has skyrocketed in Poland and the gap between the two nations has dramatically narrowed.

So why is Poland now rising relative to Spain?

For the simple reason that public policy has moved in the right direction. Here’s the data from Economic Freedom of the World, comparing Poland’s score in 1990 and today. Poland has jumped from 3.54 to 7.42, and the nation has jumped from a dismal ranking of #104 to a respectable ranking of #40. 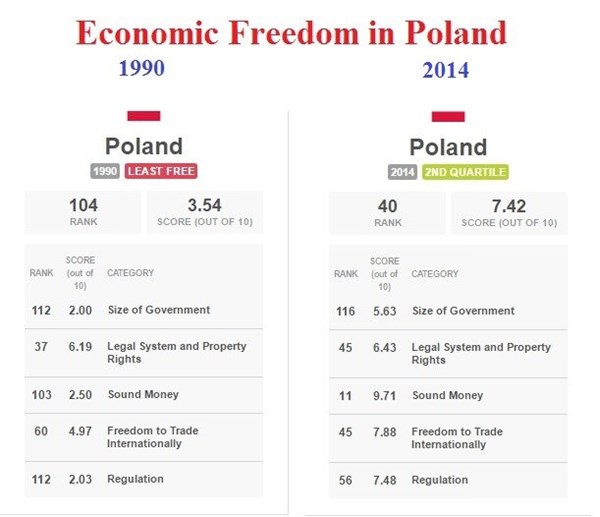 By the way, Spain’s score also has increased, but by a much smaller amount. And because the world has become more free, Spain’s ranking has dropped. Indeed, Spain now ranks below Poland.

Which means that we shouldn’t be surprised if per-capita GDP in Poland soon jumps to about Spanish levels.

Just as Poland has out-paced Ukraine because it has better policy.

And here’s a must-watch video on the relationship between good policy and better economics performance.

All of which helps to explain why I’m so disappointed in both Bush and Obama. Their statist policies have caused a drop in America’s score and relative ranking.