Red State, Blue State, Independent State, Moocher State: I don’t know if Dr. Seuss would appreciate my borrowing from his children’s classic but given how I enjoy comparative rankings, I couldn’t help myself after perusing a new study from WalletHub that ranks states on their independence (or lack thereof).

Being a policy wonk, what really caught my attention was the section on government dependency, which is based on four criteria. 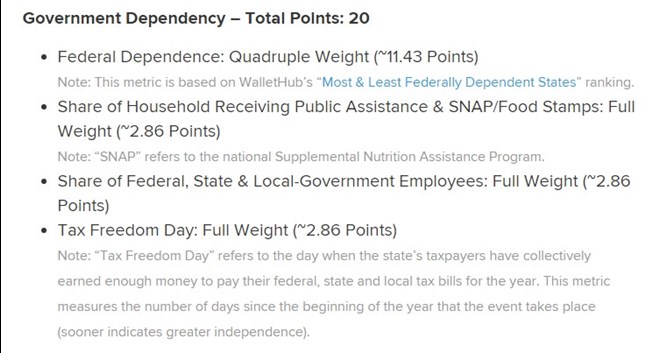 As you can see, the four factors are not weighted equally. The “federally dependent states” variable is considered four times as important as any of the other variables.

Moreover, I’m not sure the “tax freedom day” variable is a measure of dependency. What’s really captured by this variable, given the way the tax code doesn’t tax low-income people and over-taxes high-income people, is the degree to which states have lots of rich people or poor people. But that’s not a measure of dependence (particularly if the rich people stole money instead of earning it).

But I’m quibbling. I might put together a different formula with some different variables, but WalletHub has done something very interesting.

And if we look at their 25 least-dependent states, you see a very interesting pattern. Of the 10-most independent states, only three of them are Trump-voting red states (Kansas, Nebraska, and Utah).

Which raises an interesting question. Why are voters in those states in favor of big government when they don’t disproportionately benefit from handouts?

Are they culturally left-wing, putting social issues above economic issues?

Or are they motivated by some issue involving foreign policy and/or defense?

By the way, the WalletHub email announcing the report included a very interesting factoid that may explain why Hillary lost Pennsylvania.

Pennsylvania has the lowest percentage of government workers (local, state and federal), at 10.8 percent. Alaska has the nation’s highest percentage, at 25.1 percent.

Though I can’t see those details in the actual report, which is disappointing. I’d like to see a ranking of the states based solely on the number-of-bureaucrats criteria (we have data comparing countries, for those interested).

Now let’s shift to the states that have the highest levels of dependency.

If you look at the bottom of the final image, you’ll notice that it’s a reverse of the top-10. Seven of the most-dependent states are red states that voted for Trump.

So this raises a separate question. Are red state people voting against their interests? Should they be voting for politicians who will further expand the size and scope of government so they can get even more goodies from Uncle Sam?

For what it’s worth, a leftist actually wrote a book entitled What’s the Matter with Kansas, which examined why the people of the Sunflower State weren’t voting for statism.

Well, part of the answer may be that Kansas is one of the most independent states, so perhaps the author should have picked another example.

But even if he had selected Mississippi (#49), I suspect the answer is that low-income people don’t necessarily think that it’s morally right to steal money from other states, even if the loot is laundered through Washington.

In other words, people in those states still have social capital or cultural capital.

It’s also possible, of course, that voters in red states with lots of dependency (at least as measured by WalletHub) are instead motivated by cultural issues or foreign policy issues.

There’s even a very interesting study from Professor Alesina at Harvard, which finds that ethnically diverse jurisdictions can be more hostile to redistribution (and homogeneous societies like the Nordic nations are more supportive of a large welfare state).

And since many of the red states at the bottom of the rankings also happen to be states with large minority populations, perhaps that’s a partial explanation.

Though California has a very large minority population as well, yet it routinely votes for more redistribution.

The bottom line is that we probably can’t draw any sweeping conclusions from this data.

Though it leaves me even more convinced that the best approach is to eliminate all DC-based redistribution and let states decide how much to tax and how much to spend. In other words, federalism.

P.S. I put together my own ranking of state dependency, based on a formula involving welfare usage and poverty. Vermont was the worst state and Nevada was the best state.

P.P.S. I also shared calculations based solely on the share of eligible people who signed up for food stamps. Interestingly, Californians rank as the most self-reliant. Maybe my predictions of long-run doom for that state are a bit exaggerated.