Last night, the Palm Beach Gardens city council voted 4-1 (with Matt Lane voting ‘nay’) to place an amendment on the March ballot to overturn the term limits citizens initiative approved in November 2014 by 79% of Palm Beach Gardens voters. Citizen after citizen took the stand at the meeting with the message “don’t touch our term limits.” But one of the most illuminating was by resident Sid Dinerstein, a prime mover behind the term limits initiative: 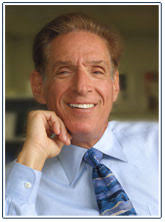 SID DINERSTEIN: The first question I ask after having been here two months ago was how do five very well-intentioned city council candidates turn into five special interest apologists in a wink of an eye.  So, I do what everybody does when they have problems like that and I follow the money.

So here’s what I figured out: the extra three years you want the electorate to give you is worth $200,000 to each of you.$30,000 plus for your base pay. $20,000 each of your own Cadillac health insurance packages. [To audience] How many of you people get one like that? And $10,000 for the pension that you get that we pay for that no one knows that you get. 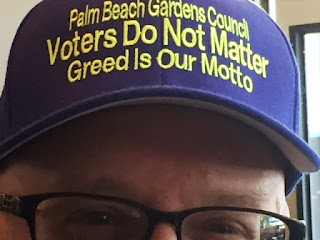 Marc Pintel’s new cap, custom made for him at the Gardens mallOnce.

Then, additional thousands for mileage and giving reimbursements when you reach into our pockets instead of into your own.Multiply that by three years and you just pocketed a cool $200,000.

I figured that out, I didn’t have to wonder anymore what happened to you guys. And why you are so unappreciative of the work we did when we put our hands in our pockets to get rid of the guys who were never leaving so we can have five new people just like you.Furthermore, something that I am guessing you don’t know, in the David Levy term limits saga we the taxpayers, and this includes you, gave the city attorney $232,000. That’s what it came to for the privilege of trying to overturn the will of the voters.

MAJORITY OF ONE: Gardens Council Member stands up for the voters

Last night [December 8, 2017], the Palm Beach Gardens city council voted to place four amendments on the sleepy March ballot, one of which would overturn the 6-year term limits law approved in November 2014 by 79% of Palm Beach gardens voters in a high-turnout general election. While the self-serving majority rushed to extend their terms via their new term limits proposal, one council member brought the citizens to their feet with his thoughtful case for honesty and restraint. Here is Matthew Jay Lane’s case for his sole nay vote:

COUNCIL MEMBER MATTHEW LANE:  …I think the timing of these four proposals is extremely poor. We just had an election where over 20,000 Palm Beach Gardens showed up, 79% of them approved a citizen initiative that limited city council members terms to two consecutive three-year terms.  It seems to me that for this council who are sitting in our seats because of term limits to make it one of our first priorities to say that we want three more years in office — it just seems like an amazing act of hubris, really terrible timing. It is saying to the the  80% of Gardens residents that came out that their vote didn’t mean anything. You gave us your opinion, and we don’t care.

Second, this proposal doesn’t address the most fundamental problem with the charter as it currently exists. Our terms in office need to be staggered. When I’ve spoken to the members of the charter review committee individually and when I have spoken to leading members of our community whom I respect , they’ve told me our terms need to be staggered. When this council took office the collective experience of the five members of this council were one year and seven months. There needs to be a mechanism put in place in this charter that obviates this problem.

This leads me to the third issue. The reason that the committees proposal doesn’t stagger the terms is because the members of the committee were not given sufficient time to complete their work. I attended a presentation by the vice chair of the charter review committee where she said the committee didn’t have sufficient time to look into the issue of staggering the terms and the facilitator of the committee, Dr. Lee, commented that this whole process was being done in weeks when it usually takes months to years  to appropriately and thoughtfully complete this task.

Fourth, the city shouldn’t be spending between $70-80,000 for a free-standing election where these important proposals are being hidden on a March ballot with the hope that they’ll be passed. Two-thirds of the registered voters voted for term limits in a general election where there was a high voter turnout. By placing this issue on the ballot this March we are permitting a small group of 1,000-2,000 people to overturn the vote of the 20,000 people who voted for a specific term limit.

So, although I have high regard for the five people who agreed to serve on the charter review committee, I consider them as friends, and although as a matter of course I usually agree with these people 95% of the time, on this issue strongly disagree and I am voting against all four of the proposed changes to the charter. I believe the recommendations of the charter review committee were badly timed, rushed through without sufficient time to do the job right, are being hidden on the March ballot where very few people are expected to attend, and they are incomplete proposals…

… The public also needs to know that we as a council are receiving emails almost daily opposing the [council’s new] term limits which were recently voted upon by 80%. If we pass these ordinances in the deceptive form in which they are written, we are intentionally — these ordinances as written are intentionally attempting to deceive the public and we will be that type of politician that we are being accused of being in all these emails from our constituents who opposed these [new] term limits.

So for these reasons, I am voting against.