More than half a million illegal immigrants of several dozen nationalities have been apprehended on John Ladd’s sprawling cattle ranch in southeastern Arizona. Ladd has also found 14 dead bodies on his 16,500-acre farm, which has been in his family for well over a century and sits between the Mexican border and historic State Route 92.

The property shares a 10 ½-mile border with Mexico, making it a popular route for human and drug smugglers evading a meager force of Border Patrol agents in the mountainous region. “As big as that number sounds, many more got away,” said National Border Patrol Council President Brandon Judd of the hundreds of thousands arrested on Ladd’s parcel. Judd spent a chunk of his decades-long career with the agency patrolling the area and he knows it well. “It’s gotten more violent. It’s gotten worse.” As part of an ongoing investigation into the critical security issues created by the famously porous southern border, Judicial Watch visited frustrated ranchers and residents in Sierra Vista, a Cochise County town located 75 miles southeast of Tucson with a population of around 44,000.

The town sits in the picturesque Sonoran Desert and is surrounded by the scenic Huachuca Mountains. Illegal immigrants and drug smugglers are devastating the area and many longtime residents live in fear. Some are too scared to enjoy a simple pastime—horseback riding on their own land. “I can’t guarantee there’s not a dead body somewhere in my ranch right now,” said Ladd pointing to his property as he stood in front of the U.S. government’s border fence, an area known as the “shit ditch” because illegal immigrants use it as a toilet and trash can.

Sporting a thick gray mustache and a dapper cowboy hat, Ladd said 200 to 300 illegal aliens are caught daily passing through his property. “We don’t have any control of the border,” he said. “I see it every day.”

A 60-foot wide dirt road, known as a federal easement, separates Ladd’s ranch from Mexico. Some portions have an 18-foot iron fence along the border that Ladd says illegal immigrants “easily climb with a pack of dope.” Other sections have a laughable wire fence that has been repeatedly penetrated with vehicles speeding through from Mexico.

Some areas have been visibly patched where holes were carved out for passage. The fence is such a joke that the Border Patrol installed concrete barriers along a busy two-mile stretch across the 60-foot dirt road, right in front of the barb wire barrier on Ladd’s property line to stop smugglers. “Smugglers even put a hydraulic ramp, so a car or truck could blow through,” Ladd said.

He estimates that around 70% of the traffic that comes through his ranch is human smuggling and 30% is drug smuggling. In the last three years most of the illegal border crossers have been central American, Ladd said. The veteran rancher first became concerned with the unprotected border decades ago because sick Mexican cows threatened his herd.

The problem became more serious over the years. “First it was Mexican cows, then people, then dope,” Ladd said. “Now it’s really bad.” Ladd has traveled to the nation’s capital seven times to bring attention to the crisis in Sierra Vista, but Washington bureaucrats have failed to take any action.

Instead, the federal government has placed ineffective or faulty surveillance equipment in the region that smugglers easily evade. “The smugglers know the radio range and avoid it,” Judd said, adding that cameras are installed in the wrong spot and don’t have great resolution. 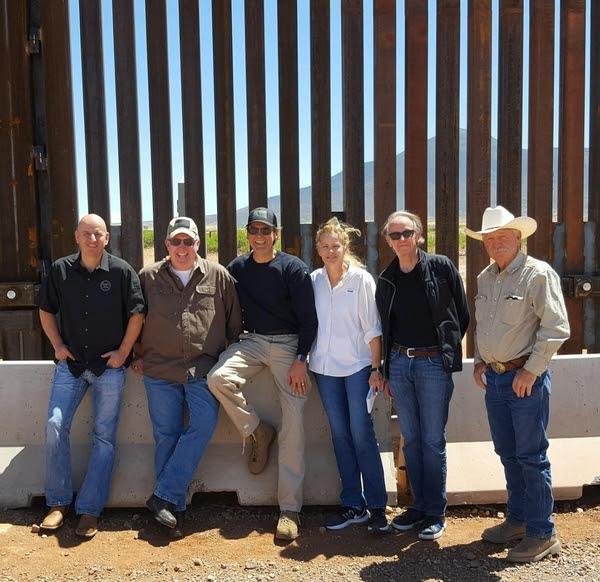 On a hill adjacent to Ladd’s ranch stands an imposing camera tower that could never capture illegal border crossers because its view is completely blocked by a sea of lush trees below. The government spent $1.3 million on the useless equipment and never bothered to study the terrain’s impact on the technology.

The Department of Homeland Security (DHS) simply installed the equipment based on a predetermined formula that separates the cameras by a fixed number of miles without considering the landscape, according to Judd. “They didn’t do any research on the topography,” he said. These kinds of failures frustrate local ranchers, who feel increasingly threatened by the barrage of illegal crossers rampaging through their property. With both thumbs resting on his thick, bronze belt buckle, Ladd looked up at the pointless camera tower smiling and quipped: “Now that’s a big boondoggle right there, a total waste of taxpayer dollars.”

Another troubled property owner, John Guerrero, took Judicial Watch on a nighttime tour of a nearby smuggling route that is inexplicably unprotected. The dirt road runs through the Coronado National Forest and Guerrero, a retired U.S. Army Ranger and intelligence officer who served in Iraq and Somalia, has felt the impact of the government’s failure to adequately guard it.

Five strands of barb wire serve as the physical boundary between the U.S. and Mexico in a remote portion of the park, which is closed to the public at night and is heavily transited by drug and human smugglers. Illegal immigration has had such a devastating impact on the area that Guerrero wrote a book offering detailed anecdotes of what he and his family endure because they live near the Mexican border. This includes drugs and illegal immigrants piling into vehicles on the road adjacent to his four-acre property and ultralight aircraft flying near his rooftop, just above the trees, en route to make a drug drop. “Local residents are increasingly fearful,” Guerrero said.

The event that has most impacted Guerrero occurred when smugglers burned down a beloved chapel, Our Lady of the Sierras, situated on a hill across the road from his home. A 75-foot Celtic cross outside the chapel remains lit through the night and serves as a navigational tool for smugglers and the grounds are regularly used to transfer drugs.

In 2011, illegal immigrant smugglers started the fire along the border to escape the Border Patrol during a pursuit. Besides the chapel, which has since been rebuilt, the fire destroyed nearly 30,000 acres and dozens of homes. Guerrero and his family were forced to evacuate. Widespread media coverage omitted that illegal immigrants were responsible for the fire, but a local news station finally reported that the Cochise County Sheriff confirmed the fire started 200 yards north of the Mexican border in an area known as Smuggler’s Gulch. “There was absolutely no mention by the federal government as to the true origin of the fire,” Guerrero said.

Judd, who heads the union that represents some 16,000 Border Patrol agents nationwide, says the border can be secured. “There has to be political will to secure the border,” he said. The frontline agency had tremendous faith that the Trump administration would finally get the job done, but the stats tell a different story.

Shortly after Trump became president there was a dip in the number of illegal immigrants entering the U.S. through Mexico, Judd said. However, “by April 2018 we were back to the Obama high of illegal border crossers,” Judd confirmed. Sierra Vista residents like Ladd and Guerrero continue to suffer the consequences of anemic border control and worry about the crime that has infested their once-idyllic town.

The problem is so rampant that Ladd often sees smuggling spotters from his property on the nearby mountains in the Mexican side. “They’re right there every day,” he said. “They live in camps and have solar generators. Their job is to look out.” Residents in Sierra Vista feel no one is looking out for them.

The Reason Liberals View Melania Trump as a Threat

WARNING: Being LGBT is Hazardous to Your Health
Scroll to top