Last September, I shared some very encouraging data showing how extreme poverty dramatically has declined in the developing world.

And I noted that this progress happened during a time when the “Washington Consensus” was resulting in “neoliberal” policies (meaning “classical liberal“) in those nations (confirmed by data from Economic Freedom of the World).

In other words, pro-market policies were the recipe for poverty reduction, not foreign aid or big government.

Sadly, the Washington Consensus has been supplanted. Bureaucracies such as the International Monetary Fund, the United Nations, and the Organization for Economic Cooperation and Development are now pushing a statist agenda based on the bizarre theory that higher taxes and more spending somehow produce prosperity.

To add insult to injury, some people now want to rewrite history and argue that free markets don’t deserve credit for the poverty reduction that already has occurred.

…the share of people living in extreme poverty around the world has fallen continuously over the last two centuries. …many often say that globalization in the form of “free-market capitalism” is the main force to be thanked for such remarkable historical achievement. …this focus on “free-market capitalism” alone is misguided. …Governments around the world have dramatically increased their potential to collect revenues in order to redistribute resources through social transfers… The reach of governments has grown substantially over the last century: the share of total output that governments control is much larger today than a century ago.

And for evidence, Mr. Ortiz-Ospina included this chart. 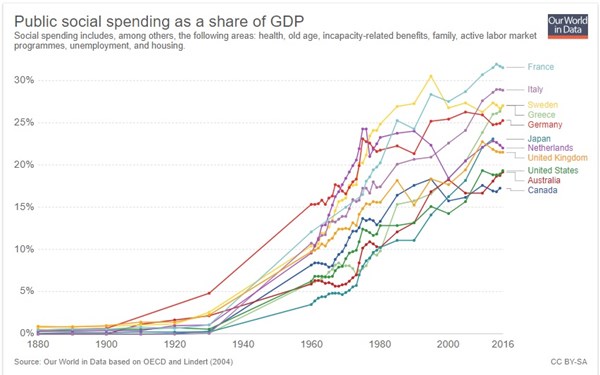 I shared a version of this data back in June, asserting that the explosion of social welfare spending made this “the western world’s most depressing chart.”

So does Ortiz-Ospina have a compelling argument? Does poverty go down as welfare spending goes up?

Nope. Johan Norberg points out that there is a gaping flaw in this argument. An enormous, gigantic hole.

I hope Mr. Ortiz-Ospina is just an inexperienced intern because if he really understands the data, one might be forced to conclude that he’s dishonest.

But let’s set that issue aside. Johan closes his video by explaining that poverty in rich nations declined before modern welfare states. I want to expand on that point.

Johan cited Martin Ravallion, so I tracked down his work. And here’s the chart he put together, which I’ve modified to show (outlined in red) that extreme poverty basically disappeared between 1820 and 1930. 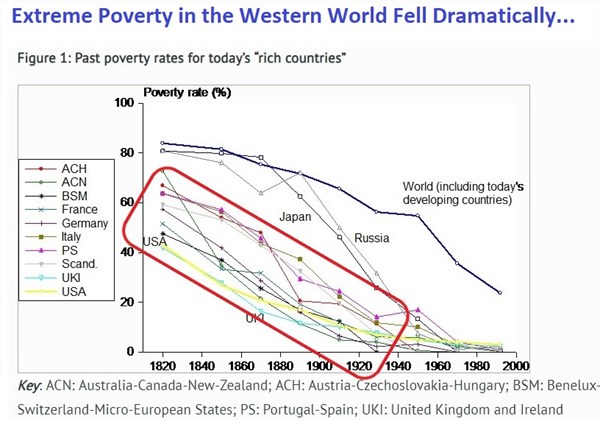 That was the period when there was no welfare state. Not only is that apparent from Our World in Data, it’s also what we see in Vito Tanzi’s numbers.

Here’s Tanzi’s table, which I first shared five years ago. And I’ve circled in red the 1880-1930 data to underscore that there was virtually no redistribution during the years poverty was declining. 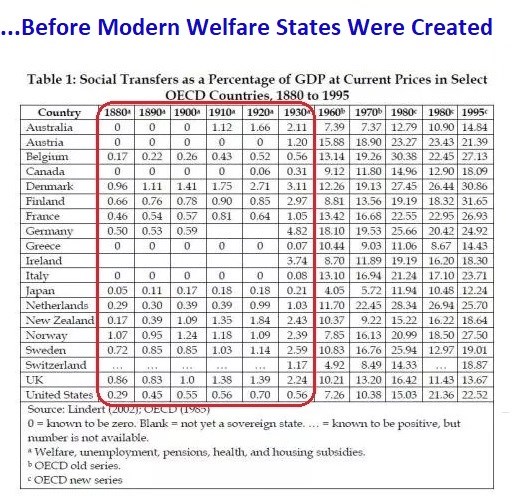 The bottom line is that poverty in the western world fell during the period of small government. Yet some people want to put the cart before the horse. They’re making the absurd argument that post-1950s welfare spending somehow reduced poverty before the 1930s.

That’s as absurd as Paul Krugman blaming a 2008 recession in Estonia on spending cuts that took place in 2009.

P.S. For those who want U.S.-specific data, it’s worth noting that dramatic reductions in American poverty all occurred before Washington launched the so-called “War on Poverty.”